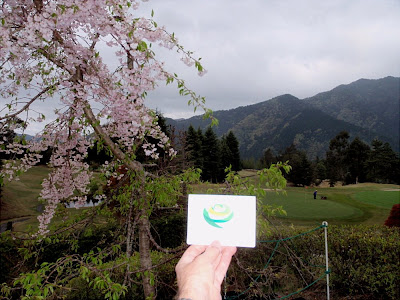 I brought golf shoes, a golf glove, and a divot repair tool. Since arriving in Japan I have been trying to break away for a round. In SF, I can get to a public course like Lincoln Park at sunrise, play the back nine, and get home before Sigrid wakes up. The yet unanswered question - could I do something similar one morning in Japan?

Research on web pages like this and this were of limited value. It is all about how to get to a golf course and back, and determining whether they'll even let me play. After several attempts at explaining my intentions to the staff at the New Otoni in Kobe, I gave up. Language barriers and pre-conceived notions (You need a car, You must be member, It is very expensive, What does this mean you want to play nine holes?) proved to be too big an obstacle to hurdle.

The Hotel Monterey Kyoto has a reputation for excellent service and they proved it by me. After checking in, I spent some time explaining the constraints of my golfing intentions - expecting similar frustrations. But the concierge (Tomi) started working the phones, and, after a few hours, she had a plan. The Kyota Ohara Public Course offered a nine hole rate of 3500 yen, rented clubs for 2000 yen, and opened by 6:00 AM. The first step of the plan - catching the first scheduled train of the Karasuma line at the Karasuma Oike subway station at 5:32 AM - a short walk from the hotel: 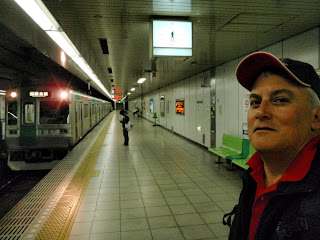 MW catching the 5:32 at Karasuma Oike station.
I disembarked at the end of the line - Kokaisaikaikan station, where I caught a cab for a twenty minute ride into the mountains and to the Ohara public course.

Cab ride into the mountains
No time for practice in the nets or on the putting green. 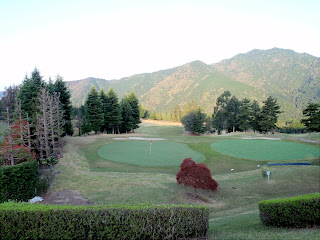 Looking out over the 18th greens (I'll be back.)
The pro shop/locker rooms were not yet open, but around back I found a couple of bemused young attendants. It turns out they had been alerted to my potential arrival by the hotel. After much gesturing and with the help of their broken English (which was light years better than my broken Japanese), I had rented clubs secured to the robocart. 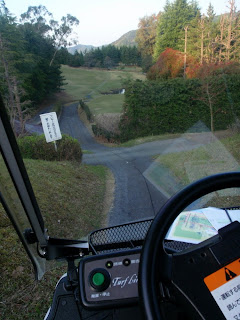 The green button makes the robocart stop and go.
No steering needed.
I played by myself, and never saw another golfer until I got back to the clubhouse at the end of the round. Some scenes from the back nine: 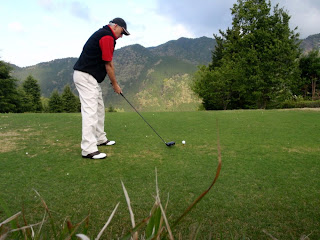 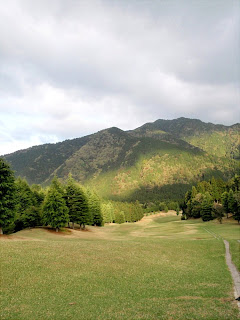 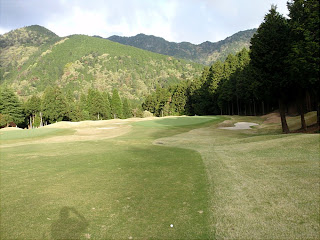 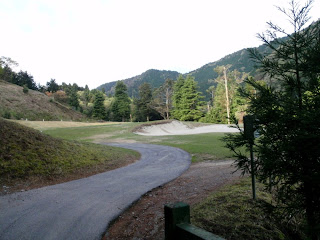 Enjoying the scenery while riding the robocart. 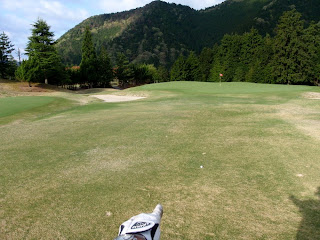 Admiring my drive on 13. On in regulation. 3 putt. 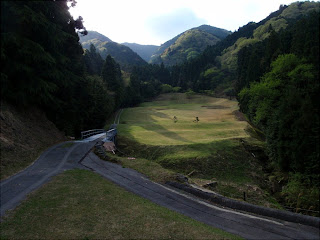 Out of the trap.
More on the Amazing Robocart: 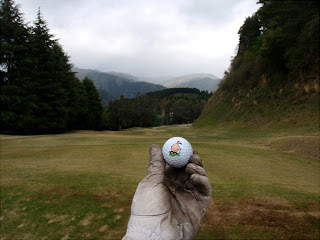 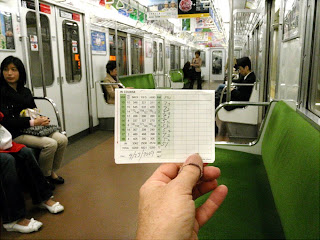 Admiring my 51* on the subway ride back. I was in the hotel by 10 AM, in time to meet the rest of the late sleeping crew for the day's touring.
Posted by mw at 2:58 PM