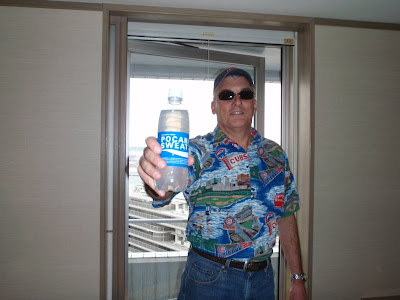 The girls are going shopping while Stan and I go the baseball game. the Hanshin Tigers are playing the Chonicki Dragons tonight. Stan tells me the Tigers are the "Chicago Cubs" of Japan, a hard-luck team that has not won a championship in decades despite a cadre of loyal fans. They even have a curse to explain the teams failure a la the BoSox "Curse of the Babe" or the Cubs "Billy Goat Curse". The Tigers have the "Curse of the Colonel" which has bedeviled the team ever since fans threw a statue of Colonel Sanders into the Dotonburi Canal. The statue was found after a recent dredging operation, and there are high hopes in Osaka that the curse has been lifted. I am wearing Cubs regalia to the game in support of the Tigers.

We meet Hayley at the train station, where we expect to to also meet her friends who will be joining us at the game. Their train is delayed due to a suicide jumping in from of a their commuter train, which I learn is frequent occurrence in Japan. [Note to self: write future blog post on this peculiar Japanese phenomena]. 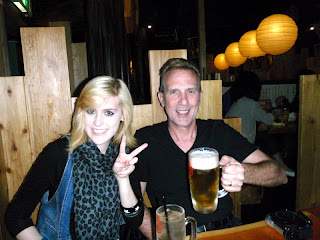 We move to a local pub where we have time for beer before meeting her friends and catching the train to the game. 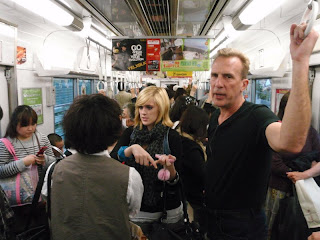 As noted earlier, I have recruited Hayley to live blog from her phone. My contributions will be backdated and posted after uploading pics from a digital camera. This process will cause some temporal confusion among the posts on the blog, which I'll get around to cleaning up eventually.
Posted by mw at 7:00 PM