The unconscionable hypocrisy of the Wild Equity Institute

The Wild Equity Institute's blatant hypocrisy on the question of Sharp Park finances is almost too brazen to believe. We'll come back to that, but first some good news in the never-ending Golf War.

After successfully defending Sharp Park against the WEI led lawsuit attempting to close the landmark Alister MacKenzie golf course, the City of San Francisco will now fight the plaintiff's Bizarro World motion to have San Francisco taxpayers subsidize their legal fight against the citizens of San Francisco. This story has percolated below the radar of most local mainstream media, but Law360 is on the case:

"A federal judge dismissed the case as moot in December after the U.S. Fish and Wildlife Service issued a biological opinion and incidental take statement for the course, which said restoration and construction activities at the course is not likely to jeopardize the continued existence of the frog or the snake. Despite losing the case, the plaintiffs said it was their lawsuit that led to the city and county seeking the biological opinion and incidental take statement, and that therefore they are entitled to attorneys’ fees. The environmental groups have appealed the judge’s dismissal.

“Their avowed goal in suing San Francisco was to shut down the Sharp Park golf course,” the city and county said of the coalition. “Had Wild Equity prevailed and achieved its litigation goals, it would not be appealing the dismissal and threatening multiple future lawsuits. Any fee award in this case would, ironically, fund Wild Equity’s continuing efforts to shut down the golf course, an outcome they failed to advance through this lawsuit but have pledged to continue to pursue ‘on all fronts.’

To anyone with a lick of common sense, asking San Francisco taxpayers to pay the legal costs of pursuing a losing lawsuit against the people of San Francisco would seem laughably absurd. But as I explained before, anything is possible when you step into the Looking Glass World of EAJA (Equal Access to Justice Act) & ESA (Endangered Species Act) legal fee reimbursements:

"Regardless of motivation, lucrative reimbursement of legal fees represent a significant financial incentive for litigants from the Center for Biological Diversity and their local "mini-me" variant the "Wild Equity Institute" founded by a relocated CBD staff attorney...  The simple reason why these lawsuits in general and the Sharp Park lawsuits in particular will never end, is that we - the taxpayers - at a federal, state, and even municipal level are paying environmental ambulance chasers to sue us."

If interested in the minutiae of why we may pay WEI to pursue meritless lawsuits against us, this Feburary post goes into excruciating details about the national problem of EAJA / ESA legal fee reimbursement abuse, of which these lawsuits are just one local example. Suffice it to say that the Tuscon based Center for Biological Diversity (CBD) has been reported to be a serial abuser of the EAJA /ESA reimbursement process, and the local mini-me clone - the Wild Equity Institute (WEI)  is following in their footsteps.  With this filing, it is clear that Brent Plater is attempting to replicate the CBD litigation fee reimbursement treasure hunt here in the Bay Area. It's kind of like opening a lucrative local franchise for ambitious environmental litigators.

In this post we'll focus on the blatant hypocrisy of the Wild Equity Institute and the misrepresentations of the ex-CBD staff attorney who founded the organization.  Like many municipalities during this economic downturn, the City of San Francisco has been wrestling with a significant budget shortfall. In 2010 & 2011, during the worst of the City of San Francisco budget crisis, the Wild Equity Institute organized a coordinated effort to promote a canard that the City was subsidizing the Sharp Park Golf course to the detriment of community organizations and social programs. The claim was demonstrably false, as explained in the video linked below. That did not stop the WEI from soliciting support from community organizations and supporters of progressive civic initiatives to participate in protests and pressure local pols into closing the Sharp Park golf course. These organizations were tragically duped. In fact about $250,000 of the $1.3 million that the Sharp Park Golf course annually  generates in revenues is siphoned into City coffers to pay overhead expenses in the Department of Parks and Recreation and for other City services. On an operational basis, the golf course subisidizes the City and not the other way around.  If WEI was successful in closing Sharp Park there would be less revenue in the city to fund the organizations that WEI conned into promoting the canard.

Some examples of WEI disingenuously promoting this falsehood include WEI founder Brent Plater speaking to the SF Board of Supervisor Budget Committee on June 21, 2010 (At the 5:50 mark in this video) saying: "Here we have an opportunity to take the $300,000 we lose annually and reinvest here in San Francisco.."


Brent Plater's statement in this video is completely, demonstrably false. If Sharp Park closed, it would cost the City an additional $200,000 to $300,000 /year in Sharp Park overhead contributions to City coffers and casuing a net decrease in funds available for City investments. 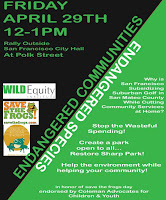 The same misrepresentation was also distilled into the central message on this flyer promoting an April, 2011 rally at City Hall with a tag line  "Why is San Francisco subsidizing suburban golf in San Mateo County while cutting community service at home?" Of course, the answer is that San Francisco is not subsidizing Sharp Park. Quite the contrary. As demonstrated in the video above, Sharp Park is operationally subsidizing overhead costs for San Francisco city services. The premise of the poster is a lie. But that did not prevent the WEI founder and ex-CBD staff attorney Brent Plater from doubling down on that untruth when speaking at that rally saying:

"We have a plan to close Sharp Park Golf Course, ... and with the money saved by the City and County of San Francisco, we can bring those resources back to our communities that need it for local services and neighborhood parks." - Brent Plater

Despicable. If they succeeded in closing Sharp Park there would be even less money available to the City for local services and neighborhood parks.  I don't know how anyone associated with this organization can sleep at night.

If lying to these community organizations about the impact of closing Sharp Park on City finances was not enough, the true depth of their cynical hypocrisy became clear in the motion WEI filed earlier this year in Federal Court. After their lawsuit to close Sharp Park was dismissed, they asked for $1.3 million of legal fees to be reimbursed to themselves from the City and County of San Francisco. As for Mr. Plater himself:

"Mr. Plater is submitting his bill to be reimbursed for 857.7 hours at a rate of $550.00 / hour. His total fee on the case so far: $471,735.00. This for his billable hours working on a case that was initially filed in March 2011 and continued through January 2013 when they filed an appeal after it was dismissed. That legal fees he is requesting is more than four times the total revenue that came into the Wild Equity Institute for the first three years of its existence. Not bad pay for 20 months work."

Yes, this is the selfsame Brent Plater who can be seen in the video above shedding crocodile tears while disingenuously claiming City community services were being robbed of $300,000 / year by a non-existent Sharp Park subsidy. He is now asking the judge to force the City to put over $470,000 of city funds straight into his own pocket and/or that of his organization Wild Equity Institute. Unlike the fictitious subsidy to Sharp Park that WEI was flogging, the money he is demanding for his legal fees expended suing the City in a losing effort would come straight out of the pockets of the organizations that stood next to him in that rally on the steps of City Hall. I can only hope that someday a local reporter might actually ask Mr. Plater about his hypocritical claims.

Look - there are plenty of good environmental organizations out there that are working in good faith to improve the environment and protect endangered species in a common sense manner. The Wild Equity Institute is not one of them. If you have money to contribute to environmental causes, give it to somebody else.

You go get them. And Brent Plater is hardly even pond scum.

I see you are loitering in Southern California climes yet again. I'll be leaving for a sailing adventure across the pond in a few days. I'm afraid I must delegate responsibility to you to provide adequate blogging coverage of the federal hearing on whether we'll all be chipping in to keep Brent Plater in beer money.

The action is moving to your Civic Center backyard. Our favorite Federal District Judge - Susan Ilston - will be sorting out what his hourly rate is really worth in Federal Court on May 10th at 9:00 AM in Courtroom 10. I look forward to your reportage.

Since I'll be on a small boat somewhere in the Atlantic, I'll be sending you an invite to cross post on this blog. I'm hoping you will agree to keep both of my readers current on the Sharp Park proceedings.

Dear Mike: If I'm not lolling about a swimming pool again in Palm Springs on May 10th, it will be my sacred duty to make it over to Federal Court 10 on May 10th and cover the Absurdity of Plater. Have a great trip across the pond.