While Morpheus is becalmed on the right coast, we had beautiful day for the traditional Opening Day boating celebration out here on the left coast. 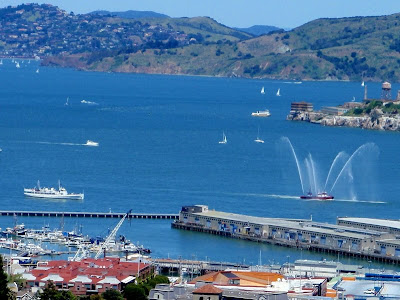 These pics from the terrace as the lead boats wrapped up the parade. The white boat with mahhogany cabin is the Pat Pending. 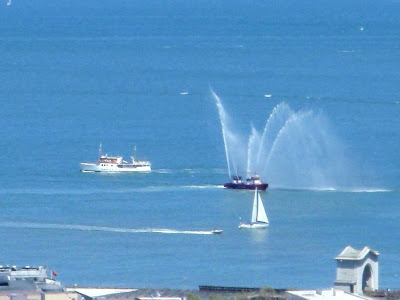 Interesting story in the Chron about the Pat Pending - It's a fifty foot classic motor yacht that led today's official opening celebration that has a long history on the Bay:

"The famous America’s Cup races are just two years away — a new day for boating on San Francisco Bay. Incredibly high-tech boats will be racing on the bay, sailing fast as the wind, moving over the water like birds on the wing. Just you wait and see.

The idea is to turn the bay into a grand amphitheater to showcase the sport of sailing — “the best sailing stadium in the world,” racing skipper Paul Cayard calls it.

To get a preview of what it might look like, check out the opening day of the yacht season today, when more than 100 boats will parade along the city’s northern shore, from just off Crissy Field in the Presidio to Pier 39, starting at noon.

It is a slow parade, not a race, a celebration instead of a competition.

Opening day on the bay dates back 94 years, an event full of tradition. The day is particularly special to Mel Owen, a San Francisco attorney who is the skipper of a 50-foot-long motor yacht called Pat Pending.

“It is 70 years almost to the day that Pat Pending led the opening day parade,” he said. His father, Don Owen, a patent attorney, was the president of the Pacific Inter-Club Yacht Association in 1941.

He had purchased the boat the year before for $7,000 — a breathtaking sum in those days. Pat Pending, which was built in Seattle in 1929, was always something special to the elder Owen — a beautiful white boat with a bluff bow and mahogany trim, a classic out of the great age of motor yachting...."

Email ThisBlogThis!Share to TwitterShare to FacebookShare to Pinterest
Labels: From the Terrace, Morpheus, Sailing, San Francisco