SF Chronicle Letter to the Editor - The Family Jewels 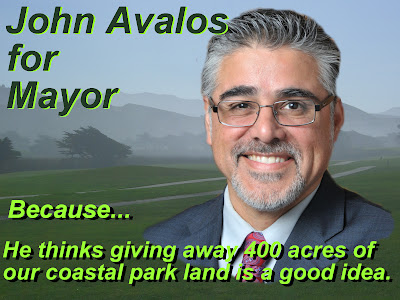 There was a time when I wondered -"Who are these people writing Letters to the Editor and why do they bother?" Turns out - it was people like me:

Give away a civic jewel?

"John Avalos is really advocating giving Sharp Park away to the federal government ("Hitting the rough," City Insider, May 19)?

This is political suicide, or should be.

Where else in the world could a politician run for mayor on a platform of giving away 400 acres of incredibly valuable and beautiful coastal park land that contributes millions in revenue to the city and belongs to the people of that city?

Sharp Park is a unique gem that belongs to the people of San Francisco. We choose to share our park with the entire Bay Area and the world.

The 80-acre golf course was designed and built by Alister MacKenzie, the game's most important architect. The 400-acre park itself was landscaped by John McLaren, the godfather of San Francisco parks. The park was a gift to the city in 1917 and represents a historic legacy entrusted to the people of San Francisco. The park and golf course are important historic landmarks by any standard.

This civic jewel of a park is a treasure that is our common San Francisco heritage and is a legacy for us to leave to future generations of San Franciscans.

Unless some clueless politician manages to give it away."

More on Wannabe-Mayor Avalos and the rally that motivated my letter linked here.

"The Only reason for the existence of golf and other games is that they promote the health, pleasure, and even the prosperity of the community... With the exception of ignorant politicians who, with a few notable exceptions, appear to desire to tax golf course and playing fields out of existence, most people know that golf and other games promote the health and happiness of the community..."