100th Running of the Bay to Breakers 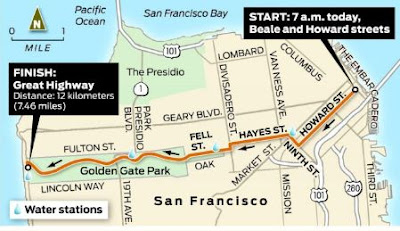 The 100th running of the Bay to Breakers is taking place as I write this. In the 28 years we have lived here, I have managed to neither run, walk or watch the race. I guess the 100th anniversary is the year to make an exception (watch not run).

Ken Garcia nails the description of the race:

Bay to Breakers celebrates impetuous, resilient city
Ken Garcia 05/15/11
"...Still, for better or worse, it became a tradition, and even it needed to be cleaned up, people have clung to it as if it were their last bottle. That’s why, in a city that will protest the existence of golf, it’s only natural that they would demand the right to drink, dress up and toddle along San Francisco’s famous hilly streets.

Tom Sweeney, the town’s most celebrated doorman at the Sir Francis Drake Hotel, will run his 35th Bay to Breakers today, his fourth in his full Beefeater regalia. He’s seen the race from when it was a novelty to its transformation to a Mardi Gras parade. “It’s hard to believe that there was a time when the race was serious,” he said, “But it’s a good thing I’m a marathon runner because the uniform weighs 40 pounds. It’s going to be about survival.” That’s always been true about San Francisco as well. You can shake it, flatten it, burn it, but it’s not going away. It would rather dare you to keep up with it."

The serious racers just finished - Moroccan Riddouane Harroufi won the race at 34:26. I'm thinking I'll take a walk down the hill and intersect the stragglers and early morning drinkers at the start of the Hayes Street hill. Stay tuned - there may be some live blogging in the offing. Or not...
Posted by mw at 8:59 AM