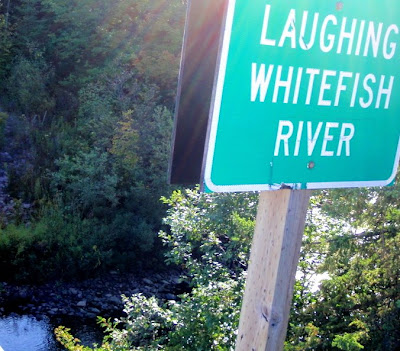 We wanted to try fishing some unexplored waters, so I hired Sasquatch, a Yooper guide I had used in the past. He has a bit of an attitude, but he knows his stuff. He suggested we go for lake run salmon in a Lake Superior tributary. 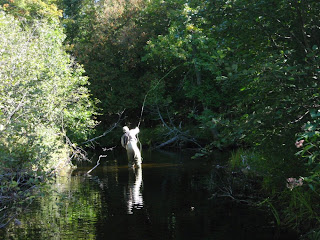 The Laughing Whitefish is narrow and shallow, with deep pools where Sasquatch believed that trout and salmon lurk. He was using a fly rod and a streamer. I do not have the skills to use a fly rod in such tight quarters, so I was using a spinning rod. We took turns casting into the pools as we came across them. At one such pool, created by a beaver dam, I took my turn and threw a few casts before launching the spinner into the upper branches of an overhanging tree. As I waded into the middle of the pool to untangle my line, Sasquatch said he would meet me further downstream and disappeared into the woods. 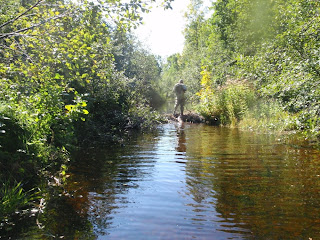 After a brief struggle and a few broken branches the tree relinquished my spinner. I waded up to the middle of the beaver dam, and saw there was another pool on the other side. I cast to the other side of the pool, and as I began the retrieve two shapes came out of the shadows and followed the lure. The fish struck as it approached the dam. After some splashing and cursing and fumbling to get the net detached from my vest, I landed it. A beautiful silver gray 20" salmon. Sasquatch later identified it as a Chinook or Coho. The whole thing was surreal. I never would have believed you could pull this kind of a fish out of a little stream like this. 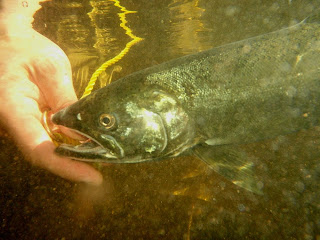 Please indulge me as I over-document the progression from river to dinner:

Planked on the grill.