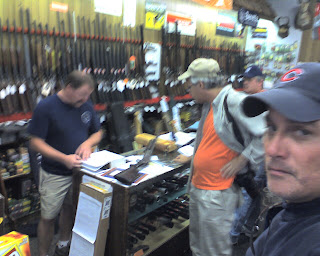 Getting Grandpa's shotgun checked out. It is a Winchester Model 1897. We learned that the gun was manufactured in 1914. Both the guy behind the counter and a collector in the store said the gun was in excellent condition. Consensus opinion - don't shoot it, except with very light target loads. 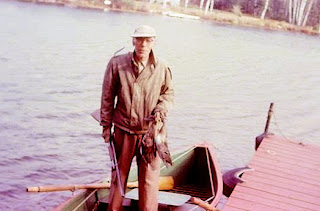 George Neumann with his Winchester 1897 shotgun at Shag Lake in 1961. I think he would be laughing at us for worrying about whether we should use the gun or hang it on the wall.

My brother took this shot of gun and dog. The Winchester1897 is on top. We subsequently got on the intertubes and learned a bit more about Grandpa's gun:

"Winchester's pump action repeating shotgun is an American Legend. Everybody knows the 1897 Winchester ... The 1897 Winchester has had several nicknames, such as the old thumbuster, and the widow maker but the old 97 is the one that stuck... it was catching on slowly before the first World War. It was still fairly popular but they hadn't sold thousands and thousands of them before the first World War broke out. In 1917 the United States joined World War I. When the U.S. Army went to war, they were scarce on weapons. What they did take was a little bit of their American styling and realism with them. They had been observing the war for the first three years and they realized how brutal trench warfare was and how much you needed close range fire power when you were in a trench... the 1897 trench gun was very effective. The nice thing about the 1897 - it was very effective when you were panicking because you could empty a five shot magazine, boom, boom, boom, boom boom, a lot more fire power than any bolt action rifle. Every time you pulled the trigger, twelve pellets of double ought buckshot came flying out the muzzle. If you did not have time to reload you always had eighteen inches of cold steel on the front.

This gun was hated by the Germans, who would kill any man on sight if they found him with a shotgun. They complained to the Hague and Geneva Conventions that we were using inhumane weapons. Up until that time they had never thought of using a shotgun in combat. Shotguns were for shooting grouse, pheasants and quail, bird shooting, gentleman's weapons, usually side by sides, very ornate, beautiful works of art... GI's who saw these things in action, however, came home and flooded Winchester with demands for them; they wanted them to hunt with. Police departments flooded Winchester with requests but wanted theirs made without the heat shield and bayonet lug on them. The 1897 Winchester became the symbol of the American hunter and the American policeman. If you saw the police doing a raid in Chicago on a bootleggers establishment, the first man through the door was armed with a 1897 Winchester. No one messed with the guy with the 1897. One guy called it the street howitzer. You could sweep out a room real quick with one of these.

Also, during the time of the Great Depression, you might be able to afford a 1897 Winchester whereas most people could not afford a fine grade double shotgun. This was a workingman's gun. GI's liked them. That's one of the reasons why the 1911 .45 and the 30.06 rifle cartridge took off so well - GI's used them."

Unlike most modern pump-action shotguns, the Winchester Model 1897 (versions of which were type classified as the Model 97 or M97 for short) fired each time the action closed with the trigger depressed (that is, it lacks a trigger disconnector). That and its six-shot capacity made it extremely effective for close combat, such that troops referred to it as a "trench sweeper".