Avignon again - The Palais des Papes - We take pictures of ourselves. 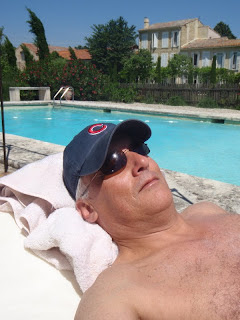 MW - Self Portrait with Pool and Villa
Sigrid and I drove through the outskirts of Avignon when we arrived last week, and decided to head back today to see the sights. This was the first truly hot sunny day since we arrived. So, after a relaxing morning with some significant pool time, Sigrid and I head into Avignon to visit the Palais de Papes. Despite Sigrid's misgivings about my navigational skills in France, we manage to get to the Palais without incident. 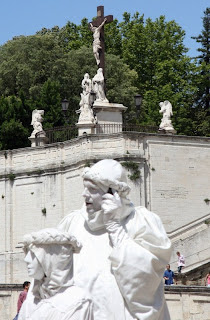 In every tourist destination in the world, there alway seems to be street performers in whiteface mimicking marble statuary for tips. Avignon was no exception. This fellow, presumably portraying a 15th century pope, was notable for two reasons. First, his female companion statue, who also had a collection can placed in front of her for contributions, was in fact a mannequin and not - you know - alive. This presumably has the effect of doubling the contributions to the "Pope". Second, as you can see in the photo, the "Pope" was chatting on a cell phone while standing on the pedestal. This detracted somewhat from the illusion, but was amusing enough that I felt compelled to take some pictures. And, of course, since I took some pictures, I left him a tip (but not his companion). It was only later, after watching the "performance" from a open air cafe in the square over lunch, that I determined that the cell calls were a regular part of his shtick, as he presumably learned from experience that it increased photos and tips.

So we toured the Palais... 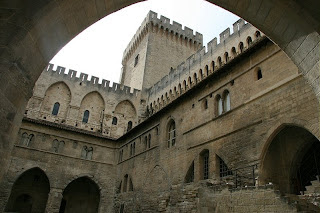 ... including a ride to the top of rock, the Popes gardens, and spectacular views of the region. This is Sigrid's photo of Chateaunef-du-Pape from the top of Palais des Papes... 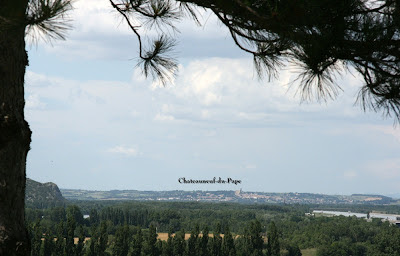 As compared to the view of... 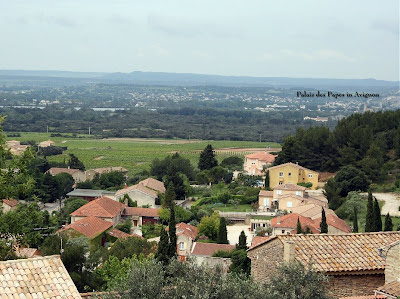 ...Avignon and the Palais de Papes, taken by Sigrid from Chateauneuf-du-Pape a few days ago.

So this was sort of like taking a picture of ourselves, separated only by a few days in time. Sort of.
Posted by mw at 11:22 PM