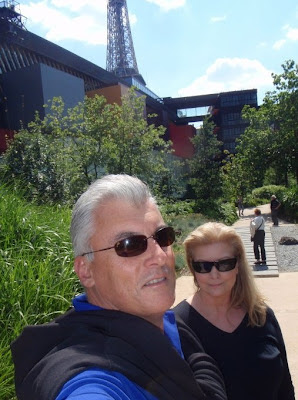 Our last full day in Paris. We spent most of the day exploring the Musée du quai Branly. This new state museum opened its doors in June 2006, and is focused on primitive art. Since primitive art is a passion of Sigrid's, and we have done some collecting of our own in our various travel adventures, it was a must see for our short stay in Paris. Vincent (our conversational companion at the Brasserie Isle Saint-Louis the day before) was effusive in his praise for the museum, calling it unique and the best museum in Paris.

It was not like any art museum we have ever seen and lived up to its advance billing. Much effort and thought have gone into integrating audio, video, and digital features into the displays, providing a truly unique perspective and experience. As an example, a display of Dogon masks are supplemented with video of the traditional Dogon dance, as it was recorded in the 30's the 70's, and in 2001. This was a particularly interesting exhibit for us, as we visited the Dogon escarpment and observed their traditional dance last fall.

A NYT Review provides some background information on some interesting politics surrounding the museum's creation, and the legacy that Jacques Chirac hoped to create for himself with its construction. I also learned from the article that "primitive art" is a pejorative and no longer politically correct. Who knew?

Vincent also suggested that we get there early before the museum opens to avoid the lines, so... 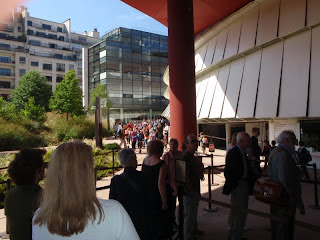 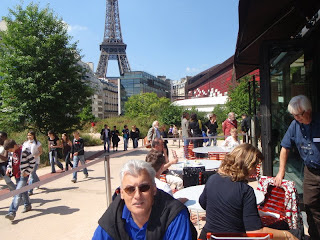 First stop was the museum cafe (located on the grounds but not actually in the museum) for coffee, croissants and pictures. Note the interesting tower in the background. It appears to be an exact duplicate of the tower displayed outside the Paris Casino in Las Vegas. Not sure why the French are copying Las Vegas casinos. Then... 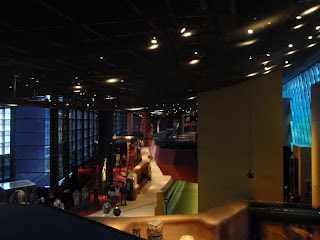 ... into the museum itself. There were signs prohibiting photographs, but I interpreted that to mean only pictures without flash when security was not looking. I took a few discreet shots as we toured the museum: 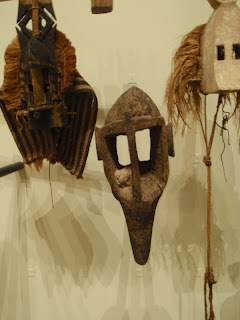 This was part of the Dogon mask exhibit. Sigrid and I bought a mask on our first Africa tour that we were told was Dogon in origin. After our visit to Mali in the fall, we did not see any masks that resembled the one we have on display at home (left). However, this one on display in the museum, though obviously much older, is remarkably similar. 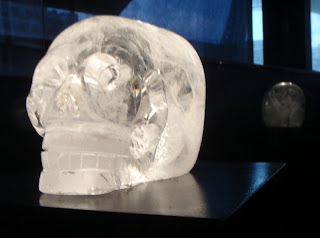 This crystal skull is displayed in the America's section. The display has been used to promote the museum, capitalizing on the recent Indiana Jones movie, but the description casts doubt on the authenticity, saying that it was probably fabricated in the early 19th century. 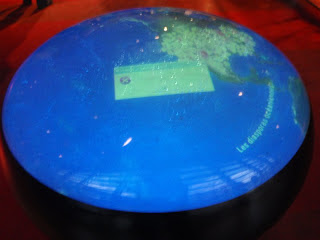 An interactive video display to show the journeys of exploration where many of the Oceania and Asian pieces were collected. Unfortunately, in the middle of the display is a large dialog box saying “Windows Error”. They should have used Macs. 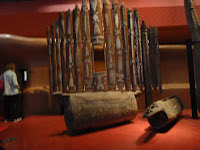 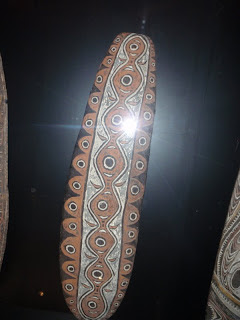 An exhibit of Papua New Guinea war shields and drums (ok, I screwed up - I thought the flash was turned off). I believe these shields are from the Western part of Papua New Guinea, and are somewhat different in design than the shields we procured in the Sepik River area during our trip three years ago (left). 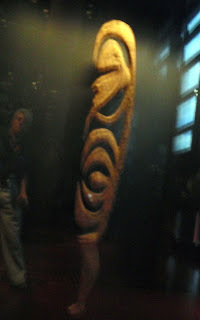 An out of focus shot of a "spirit hook" from Papua New Guinea. To be precise, it is not a focus problem but motion blur, as I could not hold the camera still enough. Sorry, it was the best I could do under the circumstances. You try sneaking shots in low light with a point and shoot camera. If you click on the picture to expand it, you can see reflection of the furtive photographer on the left side using an underhand point and click technique. Despite the poor quality, I decided to include the picture because of the similarity to a piece we collected (left) on the trip to New Gunea.
We spent considerably more time at the museum than we planned, so decided to forgo a return visit to Musee d'Orsay, head back to the room and pack for the journey home.
Posted by mw at 3:39 PM