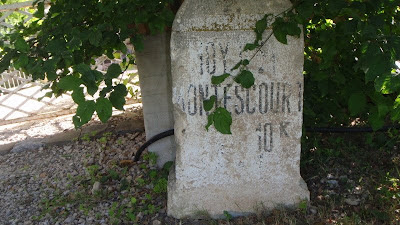 This marker on the grounds of Villa Saint Albergati is a reminder of when the main road ran by the villa, then a monastery.

We get to bed late, but awake early for last minute packing and to get on the road to the airport. Despite one of us being somewhat impaired by the previous night's activities, we manage to get ourselves loaded, in the car, and ready to go. While we are getting ready, each of the residents of Villa Wes & Susan wanders down the stairs to bid us adieu with a goodbye hug. I am not sure why they came down one at a time. I suspect that each was embarased to let the others know they will miss us. I know we will miss them. We were sorry to leave, but Paris awaits.

We manage to get to the Avignon airport early, despite a few wrong turns along the way. 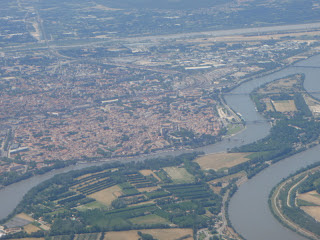 Avignon and Palais des Papes from the window of the turboprop ATR 72 shortly after takeoff.

After the short flight and a taxi ride, we arrive in... 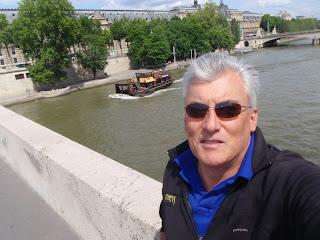 We enjoy a brief Rest and Recovery period in our 6th Arrondisement Hotel, then explore the neighborhood; and settle on the Beaux Arts Cafe for dinner. 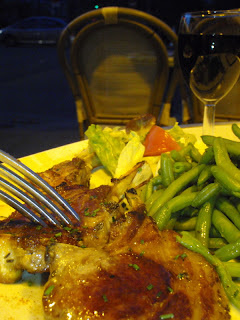 The grilled lamb chops with fresh green beans was perfectly prepared and delicious.

Earlier in the day, as we landed at Orley, I thought I saw Air Force One on the tarmac. I was not quick enough to snap a picture as we taxied by, but learned later that it was indeed Air Force One. To our shock and dismay, we soon discovered we were not the only Americans in Paris: 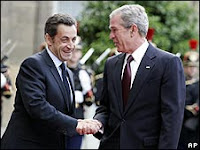 "... the Americans and the French have had a privileged relationship for two centuries now,'' Sarkozy said. "When the United States of America was born, France made a choice. It was not a European choice, because we chose to side with the Americans of the United States of America, as opposed to Britain at the time. And in two world wars we've been together. We share the same values. "It is a privileged relationship, but it's not privileged since I came to be elected,'' said Sarkozy, sidestepping the fact that indeed the chill has thawed since Jacques Chirac, an outspoken opponent of the war in Iraq, left. "It's been privileged for two centuries now. "You can't neglect that. Now, through this -- throughout that, we have had ups and downs -- hiccups -- because two peoples -- I'm talking about the French and the American peoples -- that actually resemble one another. "We express our feelings,'' Sarkozy said. "The American people can be heard, and likewise for the French people. We have to be careful about this. We have to be mindful of this when we talk to one another in our relations."

Oddly enough, I miss Jacques Chirac. Perhaps because when all was said and done, he was right and Bush was wrong about Iraq.