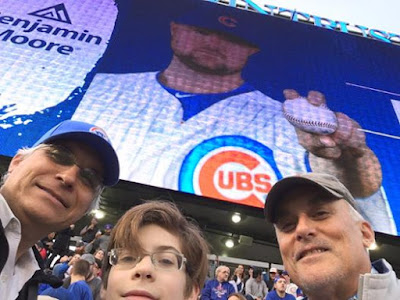 Under the new scoreboard in Center field bleachers with Harlan and Jonah. 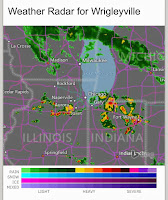 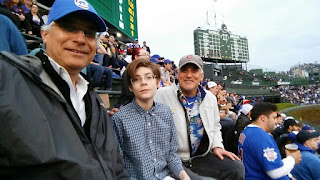 Hoping the rain holds off. So far, so good. Lester had a no-hitter intact thru 2. Looks like the Cubs will be playing "Screw the Closer" again tonight..

"CHICAGO -- Chicago Cubs hitters really mean no offense to their closer, Hector Rondon. They simply want to add on runs and win baseball games without a nail-biting ninth inning. In that vein, they play a game catcher David Ross brought to the team.


"When you're on the bench and you're up three runs, two runs, whatever, we have a game we call Screw the Closer," Ross explained, laughing and admitting 'screw' isn't the word the players actually use. "We want to score more so he doesn't get the save."

UPDATE: As I have an early start for Honor Flight Chicago in the morning, we left early with the game well in hand. Or so we thought.

There was a lot of late inning drama in this game.

"Ben Zobrist went 4 for 4, Addison Russell had three RBIs and the Chicago Cubs beat the San Diego Padres 8-7 on Tuesday night for their eighth straight win.


Jon Lester (4-1) pitched six innings of three-run ball as Chicago improved to 25-6 for the best start by a major league team since the 1984 Detroit Tigers won 26 of their first 31 games. Kris Bryant drove in two runs and Jason Heyward scored twice to help the Cubs.


Alex Dickerson became the first player in Padres history with a pinch-hit grand slam for his first career homer, according to STATS, but San Diego lost its third consecutive game. Melvin Upton Jr. also went deep for the Padres, and Jose Pirela had two hits and scored two runs.