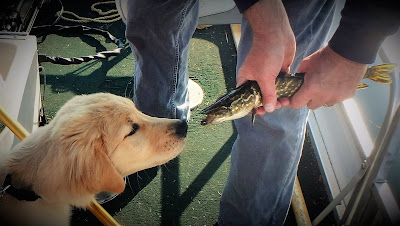 Brian and Stephanie's new dog, Tucker, is a 7 month old Golden Retriever. Watching a dog's first experience with a lake is always fun. We did not want to miss the puppy's introduction to Big Shag Lake, and Tucker did not disappoint:

You'll note we are encouraging Tucker's intense interest in the northern pike in the live well. Little did we know the dire consequences of this innocent act. We'll come back to that later. 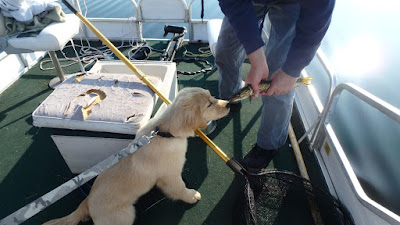 Trolling for northern pike from the pontoon boat continues to be the order of the day. How to prepare the bony beasts for consumption is always a hot topic of conversation at camp, as the illegally introduced fish dominate the lake and there is no longer a size limitation. 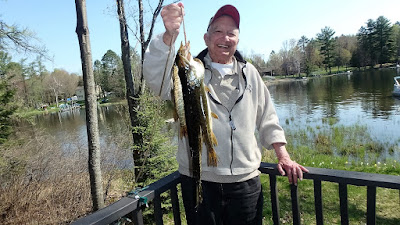 Brian offered a possible alternative by bringing his smoker to camp. Smoked northern is the plan. 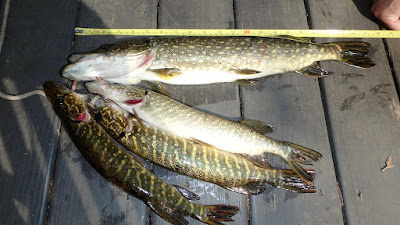 First step was to catch enough fish to make the effort worthwhile. We caught 3 smallish pike and and I caught a nice 21 incher. The next order of business was to figure out exactly how to smoke northern pike. We settled on the advice of contributors to the iceshanty.com bulletin board:

Any tips on smoking pike for beginners?

"The way I do it is scale the fish first, then remove the fillets leaving the skin on and give them a wash.  Leaving the skin on gives you something to hang onto till  it's eaten, and it doesn't come apart in the smoker I take the ribs out, but leave the y-bones in. Then put them in a brine made of a gallon of water, a cup of salt and a cup of sugar (you can use pickling salt or table salt, it's not written in stone, but I like to use brown or yellow sugar...all a matter of taste).  I'm assuming you've got a few or 1 big one to make it worthwhile.  Let them brine overnight or all day (once again it's a personal pref.) but a few times you should 'push' the brine... give it a stir to make sure the brine has access to all parts of the fish.  When it's brined wipe the excess slop off the top of the fillets with a clean cloth (it won't be clean for long, but don't worry) and lay them out on racks to dry.   By this, I mean let them sit in a cool  area with good air circulation and no flies until there's a glossy coating on the fish.  This is called the pellicle, and it's pretty important.  It takes a few hours usually for this to happen, and what that does is prevent the salt and sugar from leeching out of the fish, so it retains the tastes you've been putting into it and keeps it from getting too dry.  How long you smoke it for  depends on what kind of smoker you've got, but remember that it's more a drying process than a cooking one, and the flavour of the wood needs time to get into the fish.... You just keep an eye on it and test a little...it's fun. When it starts to look really good it probably is getting close. I like to use apple wood for fish  or if you're in the country try chokecherry and just a little red willow , and hickory or maple for birds, venison and sausage, but there again you'll have to see what you like best.   Soak your wood chips beforehand so they smoke more and longer, and watch out for the fish on the bottom racks so they don't get burnt because sooner or later those chips dry out .Keep the spritzer bottle from the barbecue handy!  You can experiment and put different things in the brine (honey, chillies, etc). Some guys like to sprinkle spices on top of the fish before smoking, but I never saw the need. When it's done, just break the fillet open and lift out the rows of y-bones as you eat them."

So... We learn this is a much more time-consuming, multi-step process than we anticipated, but "In for penny, in for a pound." 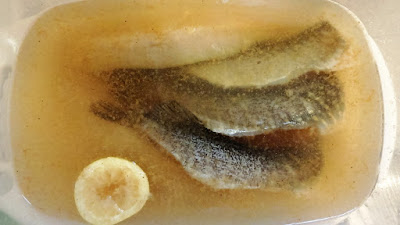 I cut two large filets from the big fish, slicing right through the y-bone, scaled it, but left the skin on. The smaller fish were scaled, gutted and left intact. Then into the brine. We used Buzzbomb's recipe, but added a few secret ingredients. Okay. We added half a lemon, a can of beer, and a pinch of dry rub spice. 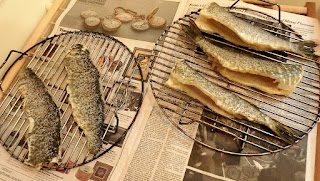 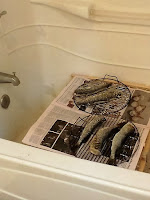 Six hour later we needed a cool, protected drying rack with good air circulation. This was a puzzlement. Necessity being the mother of invention, Brian came up with an ingenious jury rigged platform across the top of the bath tub with windows open and fans blasting. Then three more hours of waiting and checking in on the fish watching for "pellicle". Finally, Brian fires up the smoker and we are almost ready to start smoking the fish. 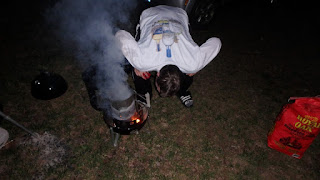 I'm watching the Cubs game in the den and I notice Tucker bouncing by the door with something in his mouth. It's one of the small pikes. After a chase around the table, I retrieve the fish with minor puppy teeth damage.

In the bathroom I find a second fish on the rack and the third in the tub, but... where are the filets? Brian and I launch a search of the house, wondering where Tucker hid the filets.  A sneaking suspicion blossoms into the dawning realization that the filets are not to be found. Tucker ate them.

The only reason I was able to retrieve the fish from Tucker's grasp, was that he was full and looking for a place to hide it.  Twelve hours of work, fishing, brining and drying the fish shot to hell moments before the pike were to go into the smoker. At this point, we do not know who was responsible for leaving the bathroom door ajar (Wait. Yes we do. It was Brian). 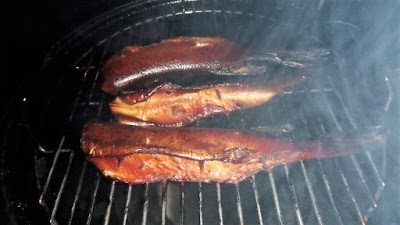 To make a long story even longer, we would not be denied. The three remaining fish (including the fish tenderized with Tucker teeth marks) went into the smoker for about two hours. They looked right. By this time we are into the wee hours of Sunday morning. They went into refrigerator for a Sunday snack. 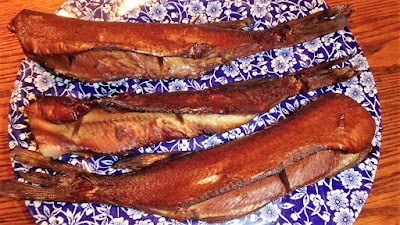 The fish was accompanied by black bread, beer, and a tomato, onion salad. It was good. Remarkably good. Astonishingly good. It tasted like smoked fish is supposed to taste. 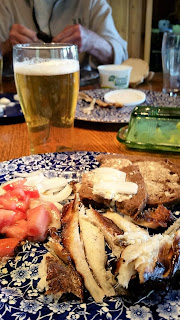 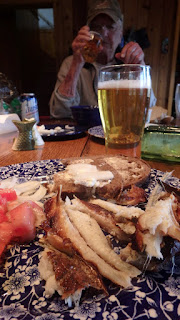 We could only imagine how much better those two prime filets would have tasted.

Well, one of us did not have to imagine.

Postscript: Tucker suffered no ill effects outside of some overnight intestinal distress,  except for the deep rooted long term psychological damage caused by overwhelming shame and guilt. 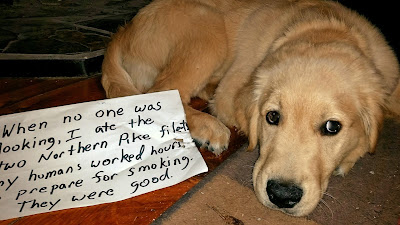 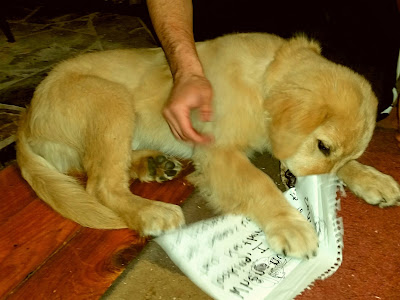