Golf Under Attack In San Francisco

I missed this story last month, but it's a good one and hits the nail on the head - If we lose Lincoln's 17th (IMHO a contender for the most spectacular and beautiful view of any hole in golf - bar none.) - you can chalk it up to the city looking to cash in on pricey real estate, back room deals with developers, political contributions, cronyism, and money, money, money:

"Rounds are down, revenue's down and the pressure to convert Lincoln and Sharp to alternative uses is growing. How much of the problem is the economy and how much is opponents opportunity? 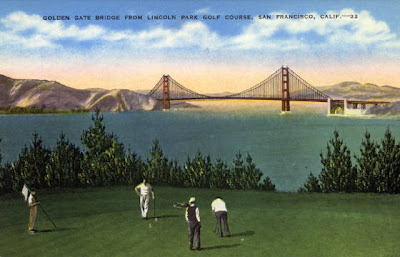 Can this view of the Golden Gate Bridge from Lincoln Park survive politics and money?

SAN FRANCISCO -- Standing on the tee at the peaceful par three 17th hole at Lincoln Park Golf Course, it actually is a clear day. So you can see forever, an unbroken line of sight that includes a sweeping view of the entire expanse of the Golden Gate Bridge shimmering in the sunlight. It looks close enough to touch. But even here on the elevated teeing ground, in this green, leafy, showroom for public golf, there are others who see something quite different.

Like a special events center. Hiking and biking trails. Maybe even a soccer field.

Rounds at the city-owned and managed Lincoln are down about 15 percent, according to some estimates, the result of a virtual rally-killing double-play combination -- bad economy to city politics to real estate potential of one of the most eye-catching locations in the city. Lincoln Park, the city's oldest and most scenic course, is at risk, proof that the effects of an economic recession can be multi-dimensional.

Richard Harris, a leader of the San Francisco Public Golf Alliance, is trying to keep not only Lincoln Park, but also the Alister MacKenzie-designed and city-owned Sharp Park, from getting lost forever in the shuffle.

"The buzzards are circling," Harris said. "The first golf courses that get lost are on the most valuable property..."