Interesting article in the the February, 2009 issue of Undercurrent. You might need to be a subscriber or member to get the full article, but I'll excerpt a small portion of it here (illustrated with some of our pics over the last few years): 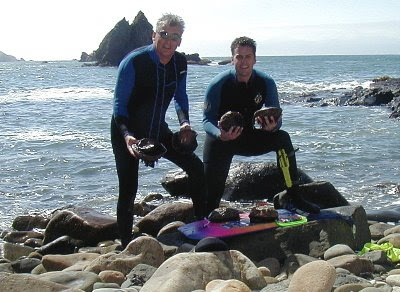 Why are divers killing themselves over these marine mollusks?
Just as the 2008 California abalone season was drawingto a close, a 29-year-old environmental engineer became the eighth person to die while hunting for the marine mollusk soff California’s North Coast. Jonathan Su of Sunnyvale,CA, disappeared November 9 while freediving with a cousin at Fort Ross in Sonoma County. Eight days later, his body was found in 20 feet of water, his weight belt still attached. According to the Press Democrat in Santa Rosa, Su’s game bag was tangled in kelp, which may have prevented his body from drifting farther.

The cove at Fort Ross is considered one of the safest dive sites on the Sonoma coast, but on that day, noted Sonoma County Sheriff’s Sergeant Glenn Lawrence, there were 12-foot swells. In those conditions, added Lawrence, “Even an experienced diver can get in trouble.”

More Dangerous Than Skydiving
As a conservation measure, only free divers or rock pickers may take abalone, and in California, only on the North Coast, which starts just above San Francisco Bay. In these parts, the Pacific rarely warms up over 55 degrees and can dip into the high 40s, so full 7-mil wetsuits are necessary. Visibility is generally 15 feet or less. During extremely low tides, rock pickers clamber out to pick the mollusks out of pools.

Besides a state license, you need an abalone iron to pry the single-shelled mollusks off of rocks (before they can clamp down with very forceful suction) and a seven-inch, caliper-style gauge to measure each abalone taken. Abalone are found near kelp, one of their food sources. Divers reach the kelp beds by kicking out from shore, usually with the aid of a tube float or boogie board to support their catch. Others dive from boats or kayaks. Most divers do their hunting in 10 to 20 feet of water, but it’s a high-risk hobby.

Since 1987, 71 people have died while diving or rock picking along the North Coast. Of roughly 40,000 people licensed to take abalone, at least 23 have died since 2004 in Mendocino and Sonoma counties. By comparison, of about 300,000 licensed hunters in California, 11 have died in accidents since 2004. The website DropZone.com, which tracks skydiving fatalities, reports 12 skydiving deaths in California during the same period. “We deal with a lot of recreational activities, like hunting and fishing, and abalone diving takes more lives than any of them,” said Sergeant Shannon Barney, deputy coroner of Mendocino County. “There’s a lot of ways to get in trouble.” 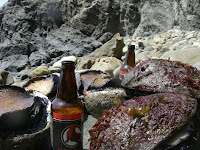 Divers and rock pickers can be buffeted by strong waves that smash them against the rocks or sweep them out to sea. Three died in Mendocino County over two days in April 2007, when the ocean was particularly rough. All of the 15 abalone hunters who died in the last two years lived outside the North Coast area. Blake Tallman, who runs Sub-Surface Progression Dive Shop in Fort Bragg, says locals have an advantage because they can wait for good conditions. “The ocean is a lot more dangerous and unpredictable here than people think,” he said. “They definitely underestimate it..." 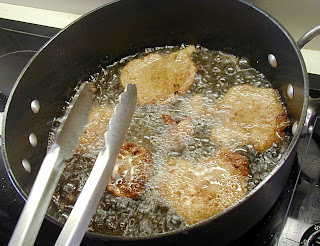 What’s All the Fuss About Over Abalone?

Why are people willing to risk their lives scrounging for abalone? After all, these

large sea snails are tough to find, tough to clean, and tough to eat unless laboriously hammered to tenderize before cooking. But abalone meat is considered a gourmet delight wherever it’s harvested, including South Africa, Australia, New Zealand and Japan. In California, abalone has even more cache than Dungeness crab because it’s so much harder to come by. With its delicate flavor and velvety texture (once properly tenderized), abalone adapts to a variety of cooking styles and preparations... 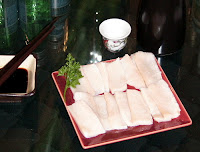 Because no meat, even Kobe beef, is pricier than abalone, there are illegal hunters and poachers. So it’s common to see Fish and Game officers watching divers with binoculars, and visiting those changing in and out of their wetsuits at their cars or campsites. Last year at my Marin County dive club’s abalone hunt, a game warden gave a ticket to one of our licensed divers who had obtained his abalone legally but had failed to punch his game card. His $500 fine was cut in half when he appeared in court.

Poachers are in for more trouble. The nonprofit watchdog Sonoma Coast Abalone Network reports that in just the first half of 2008, 40 individuals were arrested or taken to court on poaching violations, and the court doesn’t mess around...