With the national sports media descending on the City to cover The Open last week, our local public courses took a turn in the national spotlight. Two stories got my attention. First, the Golf Channel did a nice feature on the Sharp Park Golf course controversy:


It is a good piece, but has its flaws.  They fall into the easy trap of presenting the issue as golfer vs. environmentalists. It's not.  As explained here before, this controversy is better understood as enviros vs. enviros.  Some environmentalists who are motivated primarily by improving habitat for the frog and snake support keeping the course with habitat improvement. Others who are motivated by a more extreme strain of environmentalism known as Deep Ecology merely see the frog and snake as a convenient means to an end, to whit:  intimidate the City into giving control of the 400 acre park away to the Feds, closing the 80 acre course, and severely restricting human use of the park. The Golf Channel and Lerner let the WEBLEEDU's (Wildly Equitable Biodiverse Litigants for Ecological Extortion and Deep Untruths) get away with unsupportable assertions, half-truths and flat-out falsehoods in this piece. Otherwise, it's fine.

Bill Fields of Golf World does a nice job of looking past the Open focus on the private Olympic Club course to survey the rich historical heritage of our landmark municipal courses. Plus he quoted me in the second page of his article "San Francisco Munys" - so I've got that going for me: 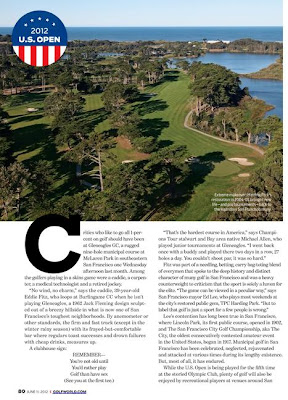 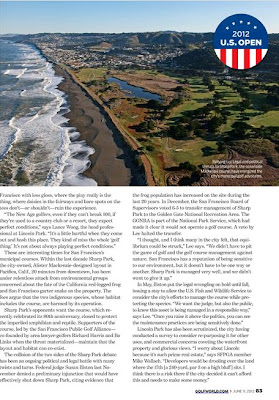 Entire article linked here. It currently appears to only be available on-line within a preview of their reader application.

Regarding my quote, I talked to the author for about 45 minutes on the phone about Sharp, Harding, Presidio and Lincoln, and apparently the only thing he found useful was this:

"I worry about Lincoln because it's such prime real estate," says SFPGA member Mike Wallach, "Developers would be drooling over the land where the 17th [a 240-yard, par 3 on a high bluff] sits. I think there is a risk there if the city decided it can't afford this and needs to make some money."

Whatever. It sounds like something I might have said.  I don't even know what it means to be a "SFPGA member".  I told Bill that I contributed to the San Francisco Public Golf Alliance and participated in some of their events.  I guess that makes me a "member".


In any case, Lincoln's 17th is a personal favorite and one of the prettiest golf holes anywhere. I don't think there is an imminent threat  now, but there was some speculation about turning that piece of land into a conference center a few years ago.

I am just glad to see our local public courses get some national attention. Our city supervisors may be completely oblivious to the assets these courses represent to the City, but others around the country are learning to appreciate these civic treasures.

The threat to Lincoln continues but it seems to be at a dull roar, so your quote is still apropos.

There was also an article in Golf Digest a couple of issues ago when they were previewing the Open at Olympic, and they had an article by Jaime Diaz about San Francisco golf, giving Lincoln more stars than Sharp, while mentioning the ragged condition of both. The best quote was from Johnny Miller, who credits his upbringing in San Francisco golf, with its foggy wet air that doesn't allow the ball to fly, uphill and downhill lies everywhere, and ragged conditions, for the fact that he'd go to manicured desert golf courses on the PGA and think, "this is easy!" and then beat everybody by 14 strokes.

I remember thinking the same thing after playing my first seriously manicured resort golf course, though I wasn't beating anybody by 14 strokes.