We were invited by friends to join their table at the second annual CURE for Epilepsy benefit at the Four Seasons Hotel.  Quite a few local luminaries were in attendance, including the two former mayors Gavin Newsom and Willie Brown, David and Susan Axelrod, Reid Hoffman, Tony Gonzalez, as well as current mayor Ed Lee.  Oh yeah - our City Supervisor David Chiu was also there.  It's a great charity and (despite political differences) kudos to the Axelrods for the fantastic work they've done on behalf of  this cause.

These are not very good quality, but snapped a few pics with my  HTC smartphone.

This was interesting to watch...

Gavin Newsom buttonholed David Axelrod for about 10 minutes.  I mean  - Gavin was rolling - rapid-fire and non-stop. Axelrod did not say three words during the whole harangue. He just kept nodding. Now, I'll admit my observational sales skills are a bit rusty, but - just judging from the body language -  Newsom was selling hard, and Axelrod wanted to be someplace else. No idea what he was saying, but couldn't help but wonder what just what Lt. Governor Newsom was pitching.  Maybe he wanted David to be the first guest on his new show. 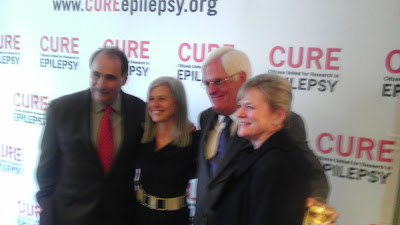