Abalone Opening Day: It is a good day to not dive. 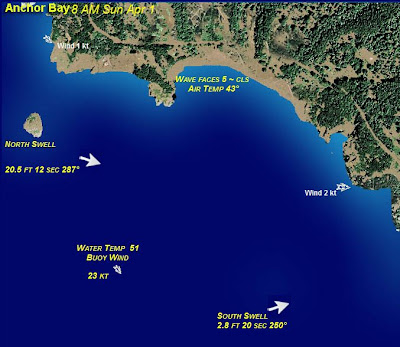 Abalone season opened today along the Northern California coast with some new rules and regulations. I find it hard to believe that anyone will go out in these conditions. I guess we'll find out when the bodies wash ashore. From the Sonoma Press Democrat:

Raging waves are expected to bear down on the North Coast this weekend, making for an ominous beginning to the opening of abalone season Sunday.

The National Weather Service has issued a high-surf advisory effective for area beaches from Saturday afternoon through Monday morning with swells expected as high as 20 feet and breakers predicted to crest even higher.

“That’s huge,” said Eric Anderson, 70, who has been diving for abalone for five decades. “Only a fool would go out in those conditions.”

But if history is a guide, some divers won’t be able to resist the call of the hunt, especially if they’ve come from a distance on trips planned long ago....

Good advice. Instead of abalone steaks tonight, we'll stay put and go with a plain old beef steak on the grill.
Posted by mw at 9:10 AM