Why we didn't get in the water on opening weekend this year. 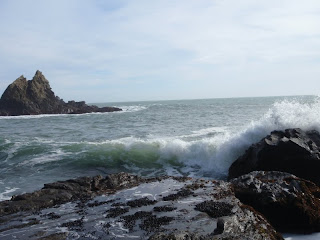 It was a good decision. Santa Rosa Press Democrat:

"Mendocino County emergency personnel faced their first rescue this year barely an hour after the abalone season opened April 1. In that case, a San Francisco diver who entered the water in stormy conditions was swept half a mile from shore, where rescue personnel found him weak and hypothermic, fire personnel said."

"A diver has been killed in a horrific attack by two feared great white sharks near south Australia's Coffin Bay. The man, who has not been named, was savaged by the sharks when he surfaced after diving for the valuable mollusks abalone.Police said a search of the area had failed to find the man's body."

Well - that is Australia. Not even the same ocean really. And he was diving in "Coffin Bay". Who is going to dive with sharks in "Coffin Bay". These kind of attacks almost never happen to abalone divers in Northern California.
Posted by mw at 8:58 AM

Stay safe! Good job. Remember, when it doesn't feel right, it's not!!