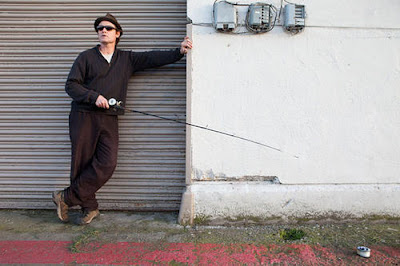 I think this must be the ultimate in urban fishing. Drain fishing in San Francisco. These shots are from an interesting cover story in the SF Weekly featuring local Kirk Lombard. I am going to have to meet this guy. Maybe sign up for one of his walking tours.

"Lombard's reservoir of fish-related knowledge is deep. He spent seven years as a catch monitor for the California Department of Fish and Game and the Pacific States Marine Fisheries Commission, where his jobs included interviewing local sport fishermen about what they caught, and accompanying sport-fishing charter boats, or "party boats," on trips outside the Golden Gate Bridge. Fish and Game still uses an educational placard he created on California surf perch and bait fishes featuring photographs he took."

This cracked me up:

"True to his background, Lombard's recreational fishing exploits are sometimes akin to performance art. In March, he treated an SF Weekly reporter and photographer to an unusual spectacle: fishing for surf perch through a storm drain in Mission Bay. Casting his line into the drain, which eventually opened on water flowing in from the bay, Lombard caught three fish in quick succession. "You think you're bad? You ain't shit, man," he cried, reeling furiously as a hooked perch gave him a fight. "You live in a drain." A female passerby, incredulous, stopped to gape: "Is that a fish in that little hole?"

Video of Kirk pulling a rockfish out of the drain linked here.
Posted by mw at 6:15 PM