Who cares about Sharp Park Golf?

It looks like the San Francisco Golf War is about to enter a new chapter. Late last year, the Center for WEBLEEDU (Wild Equity Biodiversity Litigation for Ecological Extortion and Deep Untruths) failed to secure the destruction of the course and force the city to give away valuable coastal park land by using legal intimidation and bad science. Now, the advocates for the destruction of this historic landmark course are soliciting new allies and have turned to bad accounting as the new field of battle. There is no more merit to this new line of attack than any that have gone before. The sad thing is that the "protesters" don't seem to realize that green fees from Sharp Park golfers subsidize San Francisco Rec & Park overhead costs as well as other San Francisco services and not the other way around. If Sharp Park were to be closed, taxes would have be raised or more San Francisco services would need to be cut.

This blog has participated in the Sharp Park golf kerfuffle over the last year or so. I don't like to personalize the debate, as I think it detracts from the argument when simple truth, logic, and common sense support keeping the course. But this Plater character, this self anointed crusader for the destruction of the course, sure makes it hard to keep to the high road. 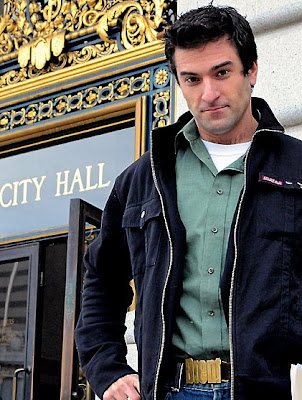 Consider this Platerism from a recent column in the SF Weekly:

"Nobody in San Francisco cares about Sharp Park," says environmentalist Brent Plater, executive director of the nonprofit Wild Equity Institute, who has spearheaded the campaign to close the course. "If that golf course were to fall into the ocean tomorrow, nobody would blink an eye... If Spock were in charge of these things, or the social insects, who deal with these collective problems a little bit better than we do, there's no doubt" that Sharp Park would be shut down, he says."

Really. Read it again. It s all there in this quote - The arrogant elitism: I Brent"Spock" Plater, Oakland resident, know what is best for you San Francisco plebeians; The slavish admiration for a hive mentality; The assertion that individual rights and needs are unimportant and must be subjugated to the will of the collective - particularly those collective needs as defined by the smarter and wiser Spock Brent Plater of course. This is a world view where unsupported pronouncements are reality and actual facts in direct contradiction to fabulist inventions are simply ignored. It is a lawyer's conceit - the conceit that one can paint a verbal picture so compelling the jury will not notice that the fantasy does not comport with actual reality.

Perhaps Brent Plater is right. Perhaps - despite Abe Lincoln's homily - you can fool most of the people most of the time. Based on the way that local fawning "journalists" in both the mainstream and independent media unquestioningly report anything he says, you'd think he was Moses delivering the Ten Commandments. They function as his personal PR firm and swallow the selfless environmental crusader bait - hook, line and sinker. And so the contributions come rolling in to the Brent Institute - or not - I have no idea. What the hell. I'll leave the links to Brent and the Brent Plater Institute in the referenced quote. For anyone who has so little respect for their hard earned dollars that they would give money to a guy who can say stuff like this with a straight face, well - you deserve each other. I am sure you will get exactly what you paid for. Maybe he'll send you a Brent Buckle.

That said, this particular absurdity:

"Nobody in San Francisco cares about Sharp Park... if that golf course were to fall into the ocean tomorrow, nobody would blink an eye."

I've attended a number of SF government committee meetings on Sharp Park over the last year. They have all been well attended by people who care a great deal about Sharp Park golf, with meetings lasting for many hours to accommodate all who want to voice their opinion to our tone deaf Board of Supervisors. My observation is the Sharp Park supporters always outnumber those who would destroy the course. These first three video clips are from one of these meetings.

San Francisco Laborers Union Local 261 Support Sharp Park Golf:
"Our organization is foursquare behind the preservation of the historic Alister MacKenzie golf course at Sharp Park."
- Zack Salem
The Sierra Club supports the Sharp Park Golf plan to enhance the snake and frog habitat:
Recommended enhancements are consistent with Sierra Club resolution to protect the snake and frog.
Karen Swaim, biologist and noted expert on the endangered frog and snake supports the recommendation to continue but modify the Sharp Park golf course:
"Golf is not what is responsible for the decline of the San Francisco garter snake." - Karen Swaim
Of course, the women, men, elderly retirees, students, and diverse golfers from all over the bay area who pay for the 55,000 rounds per year per that go into the City coffers and subsidize city services also care about the affordable golf course they love:
"This is a workingman's golf course."
Even from across the pond, they care about landmark Sharp Park Golf Course. The Alister MacKenzie Society: 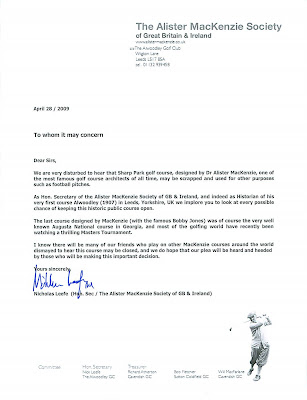 Finally, as an indicator of the depth and breadth of support for the course, a few clips I shot at a fundraiser and rally for the course last October. These were shot using a little point-and-shoot camera - so the quality is not great. But there were sure a lot of people and pols who care a great deal about Sharp Park Golf in attendance:


So given the obvious nonsense that he spouts, what is one to make of Brent Plater and his inane pronouncements?

Is he willfully ignorant? -or- just another tool?

I for one would miss playing at Sharp Park Golf Course, thanks for your astute analysis of the issues, and thanks for posting on my blog. Brent is a tool in every sense of the word. People who hate golf shouldn't be given the power to influence the closing of a course. To prevent a course from being built it a whole 'nother matter but to scrap a MacKenzie course? Ludicrous.