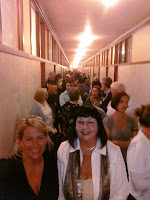 As previously reported, early last week your loyal blogger participated in the public comment portion of the San Francisco Budget and Finance Committee Meeting. Lines formed down the hall and around the corner in City Hall. We were asked to assemble by interest group, given alphabetical "tickets" and guidance on when we might expect to gain entrance to the committee room.

They started with the letter "A", we were in group "M", and four hours was the guesstimated wait time. It turned out to be pretty accurate. It still took another hour after we entered the chambers to get our two minutes and, believe it or not, I waited around to hear the opposition who were even further back in the line.

Most everyone was there to defend their financial turf, demanding that their portion of the shrinking San Francisco pie not be touched. As near as I can tell, the golfers were the only ones at the meeting not asking for money, ready and willing to pay higher fees and contribute more to the City in order to help with the budget crisis.

Hanging around City Hall for five hours, one has the opportunity to reflect on just WTF one is doing there. We were there because representatives of the WEBLEEDU Institute (Wild Equity Biodiversity Litigation for Ecological Extortion and Deep Untruths) were there to demand the closure of Sharp Park. It's not like there is any rational financial case to be made for closing the course. Having lost the high ground on the scientific argument for the endangered frog and snake, I guess they have no where else to go. 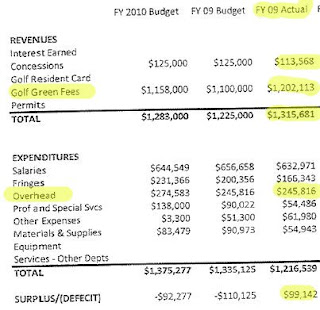 Excerpt from Rec & Park Department, Sharp Park Financials
presented to PROSAC public meeting, November 4, 2009
In round numbers, Sharp Park golf operating revenues exceed expenses by $100,000 -$400,000 every year depending on weather conditions and numbers of rounds played. The City of San Francisco charges Sharp Park $200,000 - $250,000 in overhead charges that are used to fund non-golf related SF government salaries and services. Therefore, Sharp Park may look on an accounting basis like it is making a $100,000 profit or suffering a $100,000 loss after subsidizing the City of San Francisco to the tune of $250,000. If Sharp Park Golf was to disappear, the $250,000 in overhead expenses would still exist in San Francisco and the shortfall from Sharp Park would have to be made up by higher taxes or cutting salaries and services. It is pretty simple really.

This should be obvious to everyone, but some people (see Restore Sharp Park Destroy Sharp Park Golf Advocates) do not believe in arithmetic and continue to lobby for the destruction of this historic landmark course. Since they are attending budget meetings and spreading misinformation about the finances of the course, those who support the course must also attend the meeting to correct them. That is why we were there. Welcome to Democracy in Action - San Francisco style.

Since we waited five hours to get in our two minutes, I decided I had to post some excerpts on the blog to justify this colossal waste of time. Embedded below are two YouTube videos excerpting comments of both Sharp Park golf course supporters and detractors (as well as a fair and balanced explanation why the detractor's claims about Sharp losing money is batshit insane). To demonstrate my fair and balanced approach to blogging, each video is the same length - about 10 minutes long.

HATERS OF SHARP PARK GOLF
Look, I know these videos are lame. You get what you pay for. If you want production values - you'll have to look elsewhere. Or you can watch the unedited source on the SFGOVTV.org website. The complete 6/21/10 Budget and Finance Committee meeting with public comment is available on-line. It is 12 hours and 23 minutes long. Linked HERE. Enjoy.

The next budget meeting is with the full Board of Supervisor on Monday June 28. I guess we'll find out then whether or not all of this has been worthwhile.

UPDATE: 29-June-10
If anything happened on Monday with the Board or budget that was relevant to the Department of Parks and Recreation, I have no idea what it was. The latest update from the San Francisco Public Golf Alliance on the process:

"The Supervisors Budget Committee will hold their final public meeting on the 2010-2012 budget on Wednesday, June 30, starting at 5:00 p.m. at the Supervisors' Legislative Chambers, San Francisco City Hall, Second Floor. The proceedings will be televised live on SF Government TV, Channel 26, on the web linked HERE

After the Budget Committee makes its recommendation, the Full Board of Supervisors will meet twice in the second half of July to vote on establishing the 2010-2012 budget. The full procedure is described at pages 33-36 of the Mayor's Proposed Budget, linked above.


The Rec & Park Budget appears at pages 369-375 of the Mayor's Proposed Budget (linked above). It is not detailed, and Sharp Park is not separately described or mentioned. There is nothing in the Capital Projects section of the Proposed Budget for sea wall or habitat restoration at Sharp Park. So the golf opponents' argument that Sharp should be closed in order to save millions of dollars in sea wall and related capital expenditures is just baloney. There are no such capital costs in the 2010-2012 budget now under consideration by the Supervisors. If Sharp Park Golf Course were to be closed now, the effect on the 2010-2012 budgets would be (1) reduction in income to the city; (2) no capital cost savings; and (3) closure of a much-beloved, widely-used, and historic People's Golf Course."

In that same update, Richard Harris linked to this post and the videos featured here. If that is how you found my little corner of the blogosphere - Welcome. I've been blogging about the Sharp Park kerfuffle for a while. Relevant Sharp Park posts are linked with The Golf War tag.

I also cross-posted a somewhat toned down version of this post on the Fix Pacifica blog. You'll find a lively comment thread there - some of it relevant, some of it not, but all of it entertaining.

Finally, I want to add the complete video that Elaine Harris presented to the budget committee in the meeting on the 21st. I meant to add it in the original post, but did not want it included in my "lame video" characterization. This is a good one that helps to put the fight in perspective:

Excellent post Mike. Please keep up the great, informative work. Many of us, including the Plater Pods, Pacifica Truth Police, etc. are leaving Fix Pacifica (due to its censorship/editorial policy) and moving over to Jeff's Bigmouth. Hope to see you there. Thanks!

Thanks Rocky,
I find the shifting Pacifica blog landscape interesting.

Like many, I started posting on FP out of frustration when I couldn't get anything past Maybrun on Riptide. He wouldn't even publish completely innocuous and moderate comments from me if they disagreed with the ridiculous WEBLEEDU assault on Sharp Park Golf. I was happy to find a place to air my views at FP. I'll continue to cross-post there on this topic, as I think FP has a readership that looks for an alternative to Riptide.

That said, I am a perfectly promiscuous poster, and will be happy to also cross-post on Jeff's blog if he wants to put me on as an author. I've got him in the blogroll in the sidebar now. As a Pacifica ex-pat in Texas, it looks like that blog will be less Pacifica centric - so I may be inclined to add more general political stuff I usually post on my DWSUWF blog.