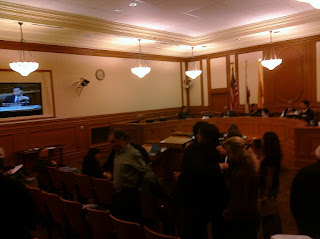 ... to proceed with the recovery plan for the snake and frog and to preserve an 18 hole golf course at Sharp Park.

Another small step forward for the frog, snake and golf course.

Now it is in the Board of Supervisor's lap.

-- Sent from my Palm Prē

The vote to approve the Sharp Park Conceptual Alternatives Report1 came at the conclusion of a five-month study and one-month public hearing and comment period, pursuant to an Ordinance2 adopted May 12, 2009 by the San Francisco Board of Supervisors.

Since the San Francisco Chronicle editorialized in favor of keeping the 18-hole golf course on September 3, 20096, the save-the-golf-course cause has been joined by Congresswoman Jackie Speier7, San Francisco Mayor Gavin Newsom8, and the California Alliance for Golf9. Long-time golf course supporters include the San Mateo County Board of Supervisors10, Pacifica Mayor Julie Lancelle and the Pacifica City Council11, the Washington D.C.-based Cultural Landscape Foundation12, World Golf Foundation13, the Alister MacKenzie Society of Great Britain and Ireland14, and the Pacifica Chamber of Commerce.15

“We have contended all along that the golf course is the most environmentally-friendly use of that property. And the Rec & Park Department’s heavily-scientific Sharp Park Study confirms this. The endangered species exist at the golf course precisely because golf is a limited and extraordinarily well-controlled public activity, and golfers are sensitive to their environment,” Harris said. “Open-minded people can see that at many sites—and Sharp Park is one of them—golf can be the most environmentally-friendly use.”

In addition to praising the hard work of his Public Golf Alliance members, Harris singled-out Laborers Union Local 261 for praise. “For some reason, there has been in San Francisco an historic mutual lack of appreciation between some golfers and golf course laborers. We have seen this change over the course of the Sharp Park debate, and we intend in the future to maintain mutually-supportive relations between the golfers and greenskeepers.” Also coming in for high praise were the Sharp Park Golf Club and the Pacifica Community Coalition to Save Sharp Park Golf Course. “The men and women of the Public Golf Alliance, the Sharp Park Golf Club, and the Community Coalition members paraded, wore buttons, signed petitions, passed-out leaflets, showed up at meetings, and did all of the shoe-leather tasks of political organizing, which is very unusual for golfers,” Harris said.

Harris had high praise as well for Rec & Park Executive Director Phil Ginsburg and Department staff who directed the complex five-month study which culminated in the Department’s Sharp Park Report. “This is an extraordinarily beautiful sight and a priceless international public golf treasure,” Harris said. “But it is also one of the most complicated political/environmental/bureaucratic puzzles I have ever worked on,” he said, pointing to issues of frog and snake biology, wetlands hydrology, golf historical architecture, sea walls, and anticipated sea level rise; there are two cities and two counties, with their respective water agencies and recreation departments, the U.S. Department of the Interior and National Park Service, the Corps of Engineers, and Fish & Wildlife Service; state agencies include the Department of Transportation, Department of Fish & Game, State Lands Commission, and Coastal Zone Commission.

“To their credit, SF Rec & Park Executive Director Phil Ginsburg and Project Director Dawn Kamalanathan have not retreated, but have dived into these complexities and tried to make the problems intelligible,” Harris continued. “Now, Congresswoman Speier is taking the lead in working for a regional solution and cost-sharing agreement between the cities, counties, and state and federal entities. The golf community highly values Sharp Park, and the Public Golf Allinace wants to help to simultaneously restore the golf course and the natural habitat.”

Having now obtained approval from the Rec & Park Department, the Sharp Park project will move into project design phase, in conjunction with an ongoing Environmental Impact Report process, for which an Environmental Impact Report is expected by November, 2010. If the restoration project remains on-track, Project Director Kamalanavan told the Rec & Park Commissioners on the evening of December 16, the city can anticipate obtaining permits for the envisioned renovation project sometime in the year 2012.