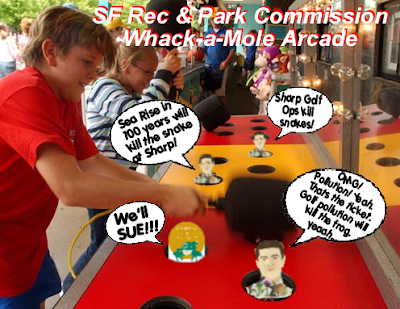 In a recent post, I described how the Center for Biological Diversity used "Whack-a-Mole" tactics with the City regarding Sharp Park:

And after quoting Congresswoman Jackie Speier's dismissal of Plater's ludicrous "sea rise in 100 years will kill the snake" argument, I said this:


"Brent - consider that mole whacked. Time for a new mole to pop up."

Apparently he is reading my blog and taking my advice. On the eve of Supervisor Mirkarimi's Government Audit & Oversight Committee meeting to consider the fate of the Sharp Park golf course, we have a new Brent Plater mole pop up out of its hidey-hole! What Fun! Here it is! Trace elements of pollutants that can be found in San Francisco Bay as well as in almost every lake, river, stream, pond, culvert or drainage ditch in the greater Bay Area, have been found in the Sharp Park wetland:

"Sharp Park Golf Course maintains several culverts and drainage ditches which the golf course uses to collect storm water and irrigation run-off, and then discharges this water through point sources into endangered species habitats on the property."

Of course they are threatening to sue (yawn). So what else is new. That's what they do. That is the raison d'etre for the Wild Center for Biological Equity and Diversity Insititute.

While all pollution is bad, and these pollutants should certainly not be there, they are going to have a very hard time showing a court that these trace elements in the run-off are having a deleterious effect on the endangered Red Leg Frog. Biologist Karen Swaim has documented beyond any doubt, that there is a a healthy and growing California Red Leg Frog population at Sharp Park. So for all the cries, lamentations and rending of garments about course operations, pollution,and sea rise, the frog at Sharp Park is doing just fine, thank you. It is coexisting with the golf course now, as it has been for the last 70 years, and will do even better after the changes recommended in the 18 hole plan for Sharp Park are implemented. In the meantime, someone needs to get some samples from the frog ponds and creeks at Mori Point, and see if the same pollutants are found there after collecting runoff from a heavy storm. Perhaps the Center for Wild Equitable Diversity should sue the National Park Service too.

But I am falling for a trial lawyer trick by giving this argument credence. It is not a serious argument. It is a distraction. The idea is to distract attention away from all the failed arguments that have gone before. the idea is to get you to Pay no attention to the previous bad arguments behind the curtain.

Pay no attention to the fact that the issues in the original letter from the Center of Biological Diversity threatening to sue the The City that precipitated this entire clusterfork are 100% addressed by the 18 hole solution proposed in the report to the SFPRD. That original letter does not mention global warming, sea rise, or pollution. Then, only golf operations was a problem worth suing over.

Pay no attention that the Plater/CBD arguments about protecting the species from sea rise that may or may not occur 50 to 100 years from now, was dismissed by Congresswoman Jackie Speier and is laughable on its face.

Pay no attention to the preposterous Brent Plater notion that the sea wall must be allowed to fail, rebuilt to the other side of the park, and the entire current viable habitat of frogs and snake made uninhabitable and toxic to the frogs with the hope that the critters will simply relocate somewhere up a restored hill in time. Where, by the way, there are no snake or frogs living now. Really. That is their plan. Kill the existing habitat by permitting salt water incursion, then build a new habitat up the hill where no frogs or snakes live now. Really. I know.

Pay no attention to the continued claims by Plater et. al. that The City is subsidizing a losing golf course for the benefit of Pacificans, when statistics show the plurality of golfers at Sharp Park are San Franciscans, that the course is showing an increase in golfers this year over last, and with over 54,000 green fees, is profitable even after taking a large hit against revenue for "Overhead". Overhead that is redirected to other City services and departments.

Anyone with a third grade arithmetic skill should be able to understand the simple concept that if the amount of a purported course "loss" is less than the amount of overhead sucked out of the course for other City services, it means THE GOLF COURSE IS SUBSIDIZING THE CITY and not the other way around. If the course is closed and the revenues from those 54,000 green fees are lost THE NON-GOLF CITY "OVERHEAD" COSTS WILL STILL EXIST and need to be paid from tax receipts or by cutting costs on other City services since those costs will not be covered by golf revenues. Perhaps we should ask Brent Plater to produce his third grade report card before listening to any more of his advice. Odd. Apparently my caps lock key is sticking. Sorry about that.

Pay no attention to the fact that Brent Plater nor the CBD can explain where the revenue will come from to make up for the lost 54,000 green fees per year, and how they are going to pay for the destruction of the course, the removal of the beautiful "non-native" cypress trees, the disposal of the fairway grass and other debris, and rebuilding a new seawall on the other side of the course to protect the neighborhoods and Highway One in their proposed "restoration" project.

Pay no attention to the fact that Brent Plater is either displaying willful ignorance of mitigation bank rules or lying when he said this to the SF PROSAC committee on July 9th:

“ There should be more walking and biking trails. In a survey golf came out about 16th or 17th. And then this. This is the idea about trying to do something different at Sharp Park that will be consistent with protection of the snake and the frog. This was the recreational desire we know that San Francisco has, and makes a lot of money. We could do a mitigation bank down here. Mitigation bank credits sell for about Three Million bucks a credit. There’s at least 200 acres of property at Sharp Park that could become wetlands for saving the frog. That’s a gross revenue of about Six Hundred Million Dollars. A fraction of that would be necessary to actually maintain the golf course itself. Let’s presume that data is twice inflated, because of the decline in the economy over the past year: Three Hundred Million Dollars. Maybe it would take Ten Million to restore the landscape at Sharp Park. Put another Ten Million in trust in perpetuity to manage it forever, the rest of that is free money that can be spent on whatever the city desires.” - Brent Plater

In fact the report submitted to the city by Westervelt Ecological Services - the authority on setting up and maintaining mitigation banks, told a very different story. From the SF Public Golf letter to PROSAC:

"Briefly summarized, Ms. Triffleman [of Westervelt] told the Rec & Park Commissioners at the November 19 public hearing: (1) there is low likelihood that the federal and state regulatory agencies responsible for mitigation banks would allow hiking trails or any other public recreational use of mitigation bank property, because of potential conflicts with the threatened species; (2) mitigation banks have high up-front costs for construction and permitting, and federal and state grants are not available to pay these costs; (3) the operation and maintenance costs for a mitigation bank would likely be high, necessitating a large endowment to pay such costs in perpetuity; and (4) the prospects for sale of mitigation credits, and the price of such credits, are highly uncertain."

So all of the things that you can see in the phantasmagorical photoshopped version of a "restored" Sharp Park prominently displayed at the Restore Sharp Park Destroy Sharp Park Golf website would not actually be permitted if mitigation banking was used as a funding source. No hiking. No biking. No dogs. None of it would be allowed. No human recreation at all. And - Oh yeah - if they get there way, there also would be no sea wall that you see the happy hikers walking on, and there would be no frogs in the salt poisoned Laguna Salada. It is all pure fantasy.

No, pay no attention to any of these failed arguments to destroy the course, because a new Brent Plater mole has popped out of its hidey-hole. Don't look over there! Look over here! Trace elements of pollution have been found in storm overflow runoff! And... And... We're going to sue!

But in reality, it doesn't matter. None of these arguments are meant to be considered seriously on their own merit. It is all about throwing a lot of stuff at the wall and see what sticks. And in all of this nonsense, something very big and important is being lost.

This is the important thing:

One more note. If anyone is wondering where Brent Plater learned his techniques, I found this clip from of one of his early cases. It explains a lot: