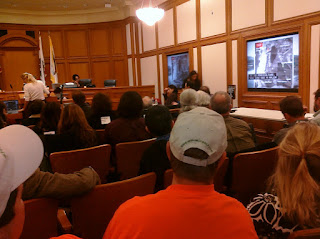 This is the most telling presentation. I don't know if you can see it in this picture, but the image on the screen is an aerial photo of the site in 1928 before the course was built. Laguna Salada is open to the sea, which is poisonous to the red legged frog. The land is all agricultural, not open wild land. The conclusion is incontrovertible. The California red leg frog and the San Francisco garter snake that feeds on them are in the park because of the golf course not in spite of it.

BTW - the laborers union from Lincoln, Sharp, and Harding Park in the orange shirts are here in force. Delighted to see them here.

-- Sent from my Palm Prē
UPDATE 12-18-09:
I've excerpted a clip of Biologist Karen Swaim's presentation from the SFGOVTV.org link to Mirkarimi's meeting.

For anyone who would like to have a real appreciation of who Karen Swaim is, why she is considered The Authority of the SF garter snake, the red leg frog and their habitat at Sharp Park, and why she is recommending the A18 option for Sharp Park (despite the fact that she is not a golfer and does not give a rat's ass about the game), I strongly recommend you invest 14 minutes in this video clip. My hope is that by giving her presentation more visibility, it will help inoculate against the kind of misinformation offered by the anonymous commenter to this post.

Her prez speaks for itself, but here are a few of her choice quotes:

"Our goal is to provide the science about the biology of what is best for the San Francisco garter snake..."

"Golf is not what is responsible for the decline of the San Francisco garter snake."

"This is a photograph from 1928. There is no golf here. The land surrounding Laguna Salada to the East, to the South, to the North, everywhere except the ocean, was agricultural fields. It is not pristine upland coastal prairie that would've been high quality upland for the San Francisco garter snake. You can see that there is a major channel up here [points to Laguna Salada] that illustrates there was connection to the ocean."

"1946 is the very first year the San Francisco garter snake and the California red-legged frog were documented... there are 46 [garter snakes] he gets over two years, and golf has already been here for 16 years."

"In 1978 Sean Berry did his studies and he observed 37 San Francisco garter snakes along this area... and again golf has been in place for 46 years"

"1989 - This [photo] is not long after the the El Nino storms and the big storms of the eighties that resulted in a lot of sea water intrusion into the lagoon. By now, the sea wall is mostly constructed... From 1986 to 1988 some studies were done and no San Francisco garter snakes were found in this area after all the salt water intrusion. That was to a large part because the red legged frog was wiped out by the salt water."

"We're back to present day conditions... the frogs are prolific west of highway one, they are not in any trouble at all west of highway one. San Francisco garter snakes are concentrating again at Mori Point pond and horse stable pond."

"You need to protect the sea wall. You need to have a fresh water managed habitat currently for this species to recover it, and that is all there is to it."

Karen Swaim's work on Sharp Park golf course failed to consider global warming, and as such does not address sea level rise, which will cause Laguna Salada to be so salty it will not support frogs or snakes. She proposes to physically remove the animals from Laguna Salada, effectively taking the habitat from the animals and giving it to human use.

@Anonymous,
Wrong. You are apparently confusing Swaim's study with the CBD/Plater fantasy. If you watch the video excerpt it is clear that Swaim has spent much of the last 10 years thinking about how to create an environment at Sharp Park which will maximize the odds of these species surviving and thriving at this site both now and in the eventuality of sea rise over the next 100 years. There is nothing from CBD/Plater that outlines a habitat plan on this site at this level of specificity. Nothing. Look for it. It does not exist.

Moreover, it is, in fact, Plater/CBD that are advocating either destroying the seawall or letting it erode. That action absolutely guarantees the salt poisoning of Laguna Salada and the destruction of this habitat and the existing population of frogs and snakes found at the site today. The Plater/CBD plan is to deliberately replicate the berm failure in the eighties that was responsible for the virtual destruction of the frog and snake population on the site.

Thanks for stopping by though, and thanks for the comment.

Can you say biostitute? California red-legged frogs (CRLF) historically occurred in brackish marshes all around the Bay. Sharp Park has been known historically as a marsh habitat that was inhabited by some of the largest extant populations of CLRF and San Francisco garter snakes. Golf doesn't kill amphibians- although golfers have been observed doing just that- with their golf clubs and golf carts- however- draining marshes does impact amphibians and reptiles.