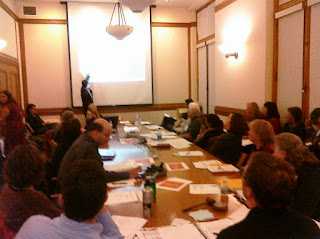 Well, not really. It won't be much of a live blog as this will probably be my only post. Tetra-Tech and Swaim Biological are again presenting the various plan options (18 holes, 9 holes, no golf) for Sharp Park much as they did in the meeting to the Rec & Park Commission. Much smaller public participation (which is good, it's a smaller room) but the committee itself is larger. Actually there are more committee members than public attendees. Looks like more pro golf than not among the public.

-- Sent from my Palm Prē
UPDATE:
I continue to be impressed with the efforts of Karen Swaim and David Monroe from the consulting firms hired to analyze the options for The City. They competently and dispassionately knocked down the half-truths and outright fabrications that has been thrown at them in the media and blogs by the "Destroy Sharp Park Golf" crowd since the Rec & Park Commission meeting. During Public comment, there were about a dozen supporters from both San Francisco and Pacifica who spoke up, but no one in opposition to the course. I guess they don't come out at night.

One vocal district representative said he would vote against recommending the report (missed his name - Jason?) , because he felt that they did not have enough information on what the capital costs would be to keep the course and whether GGNRA or San Mateo Country would be interested in taking it off The City's hands. It sounded to me like he was repeating recent Mirkarimi talking points.

Jason was promptly schooled by Nancy Wuerfel, who was ready with an analysis indisputably showing the course to be an operational money maker, explaining the difference between capital and operational expenses for the accounting illiterate (like Jason), and making the point that Federal grants to secure the resources to improve and manage the habitat would not be available if the course was given away.

She concluded by saying that if anyone was seriously advocating that The City should give away 400 acres of prime ocean-front park land, she would fight them tooth and nail. It was all I could do to keep from standing up and cheering. I think Team Mirkarimi have run out of ammo and are now shooting blanks.

Here is the important bit:

The committee voted 14-1 to recommend The City proceed with the 18 hole option.

I think this is what real journalists call a buried lead.

All in all, a good night for the good guys.

By a 14-1 vote, PROSAC endorsed preservation of the golf course, in conjunction with a Rec & Park Department plan to rehabilitate habitat at the western end of the property for two threatened species, the San Francisco Garter Snake and the California Red-legged Frog. By a separate 13-2 vote, PROSAC approved a resolution encouraging the Rec & Park Department to continue efforts to cooperate at Sharp Park with the city of Pacifica and County of San Mateo. On a preliminary procedural vote, PROSAC members specifically declined to include the Golden Gate National Recreation Area (“GGNRA”) in the “cooperation” resolution. All of PROSAC’s recommendations will be forwarded to the Recreation and Park Commission, which on December 17 will conduct a continued public hearing on the Sharp Park matter...

Nancy Wuerfel really is the bomb. She's not even a golfer but is defending the recreational municipal golfer because she can't stand the sleight-of-hand accounting over at Rec & Park.

True. I've seen her in action at a couple of meetings now and read her report. She is in the best tradition of the Political Gadfly - she keeps them honest.