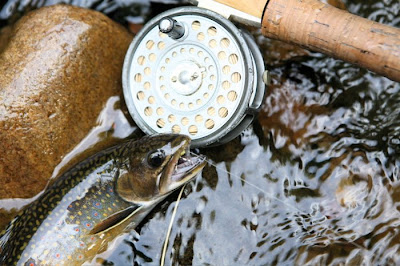 I am heading for the UP tomorrow, so found today's U.S. Fish and Wildlife Service decision interesting and disturbing:

TRAVERSE CITY, Mich. (AP) -- Federal officials have decided against placing the coaster brook trout on the endangered species list, even though the fish has become increasingly rare after long flourishing in the upper Great Lakes. The U.S. Fish and Wildlife Service on Monday said a yearlong review had concluded that coasters were not distinct enough from other brook trout to list them as endangered or establish protected habitat...

Roughly 119 Superior tributaries and a half-dozen streams flowing into Huron once supported coasters. But overfishing and habitat degradation in the 1800s nearly wiped them out. Today, just 15 stream-spawning and three lake-spawning populations are known to exist -- all in Lake Superior. The Sierra Club and the Huron Mountain Club, a private hunting and fishing preserve in Michigan's Upper Peninsula, petitioned the government in 2006 to designate the coaster as endangered...

...the Fish and Wildlife Service said its review did not yield convincing evidence the coaster was a distinct population segment, much less a separate species or subspecies. Instead, the agency labeled the coaster a "life history form" that could be reconstituted from other brook trout under the right environmental conditions. "Thus, the population health of coasters is essentially equal to the population of brook trout in the upper Great Lakes," the agency said in a statement."...

...Self-sustaining coaster populations are found in the Salmon Trout River in the Upper Peninsula, which flows through property owned by the Huron Mountain Club, and in the waters of Lake Superior's Isle Royale National Park.

...Opponents of a proposed nickel and copper mine in the Upper Peninsula say it also could pose a danger. The mine would extend beneath a section of the Salmon Trout River. Kennecott Eagle Minerals Co. says its project would not harm the fish."

A lot to chew on here. For reference, loyal MW Mobile Blog reader HDW has a great post on the Salmon Trout River, the Kennecott Mine and the coasters. The headline picture above was ripped from his post.

My gut reaction - this is an incredibly bad decision. What is the point of having an Endangered Species Act, if it is not going to protect a native species as devastated as the the Coastal Brookie? Michigan will be a poorer state and we a poorer nation if the coaster goes the way of the Michigan Grayling.