I'll be at Sharp Park on Saturday to help celebrate the track's 80th anniversary.  The anniversary celebration includes a benefit tournament for the San Francisco Public Golf Alliance, in which I hope to  improve on my recent performance. That is a very low bar. I have to start somewhere.

"The folks down at Sharp Park will mark the course’s 80th birthday with a tournament and celebration Saturday. The festivities are part of National Historic Preservation Month and will be hosted by the Pacifica Historical Society, Pacifica Chamber of Commerce, Sharp Park men’s and women’s golf clubs and the San Francisco Public Golf Alliance. The tournament, expected to draw nearly 250 golfers, will be followed at 6 p.m. by festivities, including historical observance and a silent auction in the Sharp Park Clubhouse Restaurant." 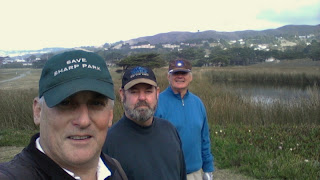 But this is San Francisco and, unsurprisingly, not everyone feels the same about the park. We will  - of course - have a protest.

"In addition to the tournament, which tees off at 12p.m., golf supporters will enjoy drinks, appetizers, a raffle and silent auction, guest speakers and the beat of protestors drumming in the parking lot. A Santa Cruz-based nonproft that aims to protect all frogs on Earth, has scheduled a public protest of the alleged killings of the California Red-Legged Frog, a threatened species, during golf-related activities at Sharp Park. The organization has strategically scheduled drumming sessions on Saturday to sonically interfere with the celebration of the course's 80th anniversary."

The competing views got a hearing in Federal Court a few months ago when the WEBLEEDU's (Wildly Equitable Biodiverse Litigants for Ecological Extortion and Deep Untruths) failed to get a preliminary injunction to kill the course. The judges ruling:

"Experts for both sides agree that the overall Frog population has increased over the last 20 years... Neither side disputes that the number of egg masses found last winter in Sharp Park was the highest ever recorded... Plaintiffs have failed to meet their burden of showing irreparable harm to the California Red Legged Frog or the San Francisco Garter Snake absent the issuance of a preliminary injunction on defendants' activities at Sharp Park. Accordingly, the motion for a preliminary injunction is DENIED."

Hard to make a case that the golf course is harming the frog when all experts say the frog population is flourishing at the course.

This is completely consistent with the testimony of Karen Swaim to the SF Board of Supervisors. Karen Swaim is a field biologist who has worked for over 20 years with the frog and snake habitat at Sharp and Mori Point. In fact she was a principal in designing, monitoring and managing the new frog ponds at neighboring Mori Point. She was even acknowledged as an expert by the WEBLEEDU's until she testified to the heretical view that the course was not harming the two endangered species. She is now apostate. She is still regarded as a local expert by all state, local, and federal agencies with an interest in survival of the species. Here is what she said:

"Golf is not what is responsible for the decline of the San Francisco garter snake... the frogs are prolific west of highway one, they are not in any trouble at all west of highway one... You need to protect the sea wall. You need to have a fresh water managed habitat currently for this species to recover it, and that is all there is to it."

As far the drum circles, I'm thinking they can only help my game.  I'm sure the rhythm will even my tempo and smooth out my back swing. 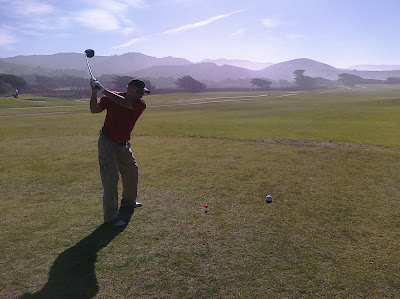 If my playing partners will put up with it, look for a some live blogging of the tourney tomorrow.