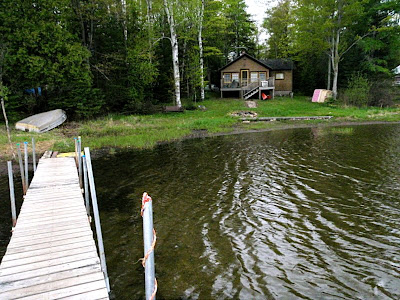 Tin can out and leaning against tag alder stump. Paddleboat continues to support the small maple tree. 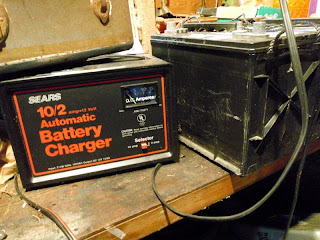 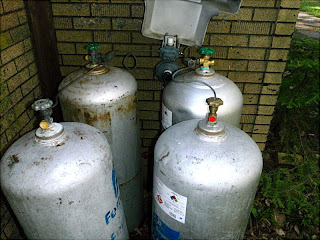 Ferrel Gas came out when I was out at the forties. Not exactly sure what they did. They talked to dad after they were done and he did not see what they did. I told them and Dad to replace the two inside tanks, which I thought were empty. They told him that the tanks we were using (outside tanks) were full. Yet one of the outside tanks was replaced. Or they changed the order. I have no idea what they did. All the valves were turned on, and the the indicator switch was moved to point to the inside tanks. Anyway, for the close I turned all the valves off. I also thought I could detect the smell of gas around the tanks when I went to turn them off. Whoever turns the gas on next - be aware and pay attention. Sniff around the tanks frequently. I also conclude from the ferrel gas guys claim that the outside tanks are full that our actual consumption cooking with gas is so minuscule compared to the tanks, that we have about a 10 year supply of gas right now. 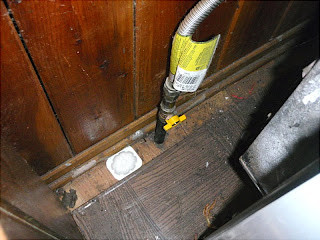 I also turned off the gas behind the stove. Also note the ant bait. We put a bunch of ant baits all over the camp, especially the kitchen and bathroom. The ants were worse than I ever remember. Big black ants. Maybe carpenter ants. Maybe they are eating the camp. 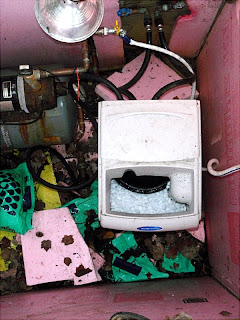 Full salt load in the water boss before leaving. There a one partial bag of salt in the shed. Next visitors will need to buy more. ALSO NOTE: There are no supplies in the wine cellar. Zero. Nada. Nothing. 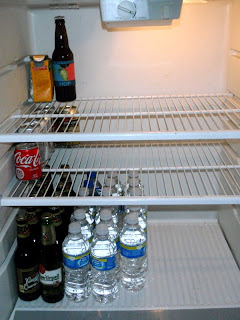 There is some beer and other liquid refreshment in the refrigerator. One bottle Sean's home brew - The Audacity of Hop, which belongs to HW. Do not drink. 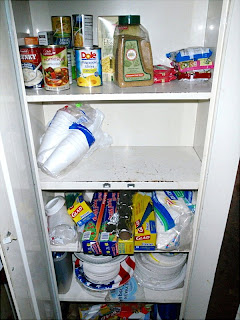 Cabinet Status: Paper are plastic supplies are good. Some can goods - all new this year. 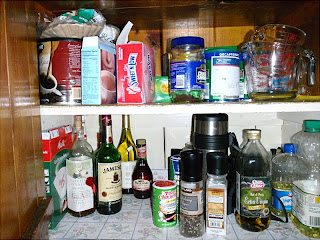 Cupboard Status: One bottle of cooking wine. No scotch. Oils are good. No decent coffee. 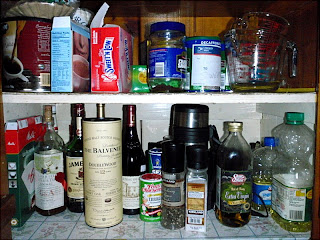 UPDATE 07-June-09: I felt so guilty about leaving the cupboard bare, that I made a run from camp back to Binny's on Dempster, and added some supplies. See if you can tell the difference in these two pictures.
Posted by mw at 3:07 PM

It's remarkable how similar our cabin in Twain Harte is to this. I think we have same fridge, and metal storage cabinet.

But do you have the same bottles of Dalwhinnie and Laphroiag in the cabinet? That is what is important.