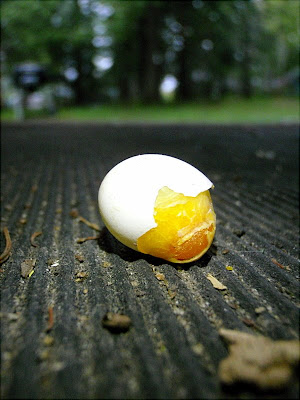 Sunday, June 8, 2009
CSI - Michigan: The Scene of the crime. The Reader may recall this photo from the May 20 Camp Opening Notes, documenting the odd combination of eggs resident in the nest under the eaves: 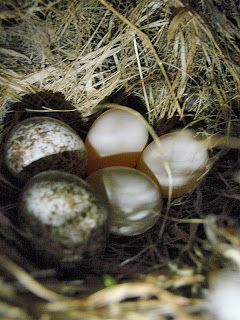 Wednesday - May 20, 2009
It seemed pretty clear that the smaller white eggs belonged to the caretakers of the nest, the Olive Sided Flycatchers, while the bigger brown speckled eggs were deposited by interlopers. HW and I discussed whether to intervene, but ultimately decided to let nature take its course. One side benefit of the unplanned return trip was that I witnessed the final denouement of this little drama. Specifically - the picture at the top of post - the last white egg - found on the porch mat under the nest.

The suspects were under surveillance throughout the trip. Permit me to submit the following photos into evidence: 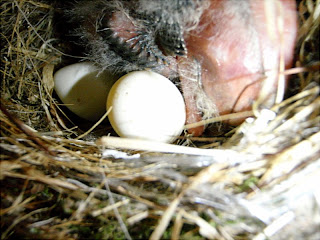 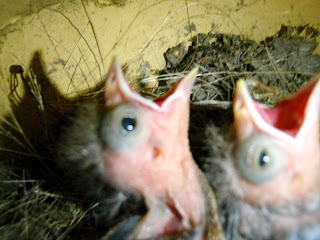 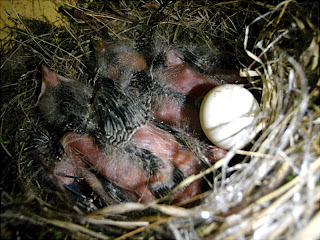 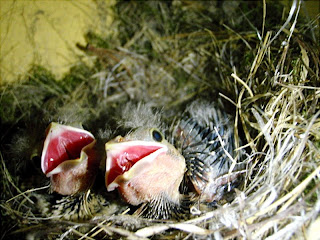 June 8, 2009
Only two birds left in the nest. The last white egg broken on the ground.

HW guessed the identity of the perps as cowbirds. Confirmed.
Posted by mw at 5:00 AM