Since Northern Pike were introduced into the Lake in the mid-nineties, pike have become the dominant gamefish in Big Shag Lake. As a consequence of that fact, combined with the DNR regulations that put no minimum size limit on the fish (with a 1 pike/day over 24" limit), we catch a lot of pike. A lot.

When I arrived, Dad and Harlan already had 5 pike in the trap and we still had some frozen filets in the freezer from the Spring trip. My 27" trophy was the biggest fish of the trip, and the year, and probably matched my biggest fish ever out of the lake. Harlan took trip honors for First Fish and Most Fish, as it took Dad a few days to get off the snide.

Pike are fun to catch but, over a period of weeks, the challenge is to find variety in how to prepare and eat them. Because we eat what we keep. This trip we met that challenge head on.

First up - we went for the exotic. Pike backstrap filets in a sesame oil on the grill, drizzled with Unagi Sauce and served over rice accompanied by grilled veggies. The idea is replicate an Unagi Donburi Bowl. 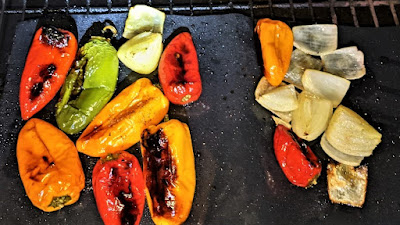 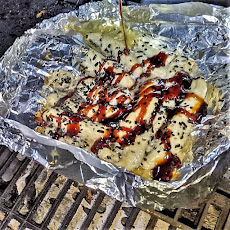 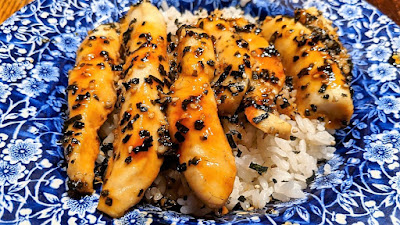 It was pretty close and pretty darn good. But pike filets are not as oily as unagi so, when cooked, tends to be drier. Next time I'll cook them less. 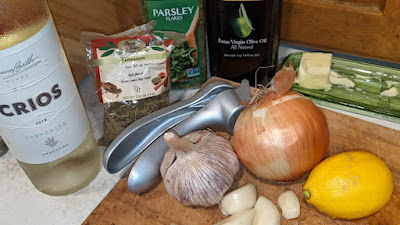 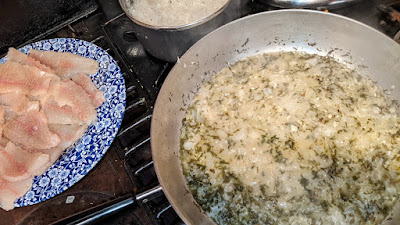 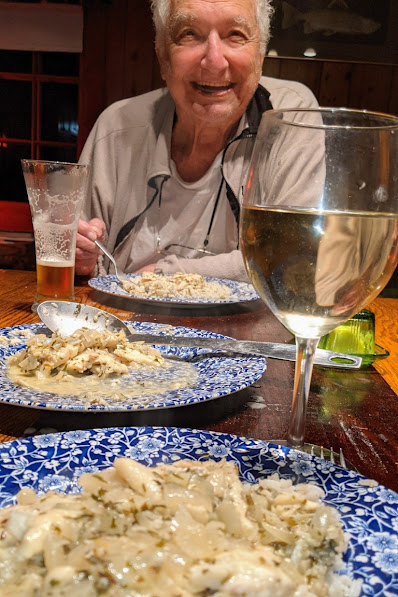 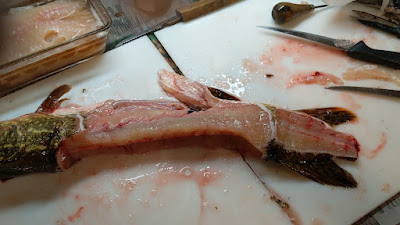 Every time I carve a pike and dispose of the carcass (which happens frequently on these trips), Dad tells me this story: His dad, my grandfather, Hyman would go to the fish market and pick up fish heads and bones from the fish mongers for a pittance or free, take them home, and make a fish stock. I decided it was time to attempt that culinary family tradition and make our own Yooper fish stock [Recipe we mostly followed linked here]. 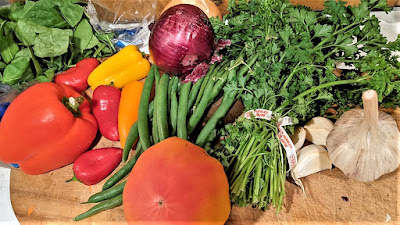 Of course, if you're going to make a fish stock, you need to do something with it. Roy and Roxie's arrival at Camp provided the inspiration - Sinigang - a traditional Filipino sour and savory Fish Soup using the home made Yooper fish stock. This would be a culinary first for me.
The whole process took a lot longer than I anticipated, and we did not eat dinner until 10:30 PM,  but it was worth it. 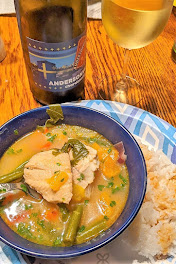 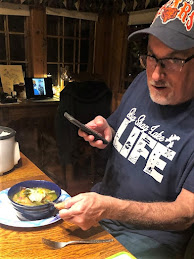 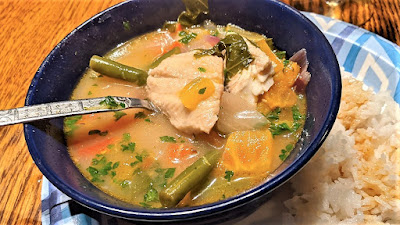 Roxanne declared the dish authentic and granted me honorary Filipino status. I was humbled. 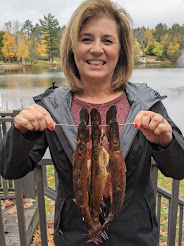 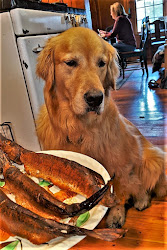 Smoking pike is not a new preparation for us. This was our fourth smoked pike project. These efforts are always led by Brian when he brings his smoker. The most memorable being our first smoking attempt when Tucker took the initiative. This trip Brian arrived with his smoker for his first Camp trip this year.

But there is another story here. After renovating the lake house 10 years ago, we dedicated a new hallway wall near the entrance as the Fishing Wall Of Fame. Since then, pretty much everyone in the family had their notable catches memorialized on the wall. Everyone except one. Wendy was notably absent. It seems that, as a child, Wendy was taken out to fish on the lake and informed that she would eventually be required to hook the worm herself. That was the end of her interest in fishing. We determined that this situation could not stand. To get Wendy her first Shag Lake catch in 5 decades was no small task. 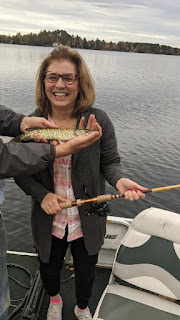 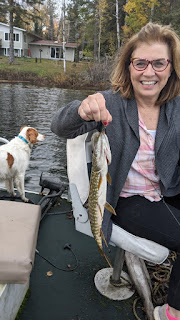 It took the combined efforts of the two most experienced fishing guides on the lake. Humbly, that would be me and Harlan respectively (and in that order).
Long story short... Success! Wendy caught two Northern Pike.  Brian's smoking skills were utilized top prepare the catch and the entire experience was captured by a noted Big Shag Lake Documentarian. 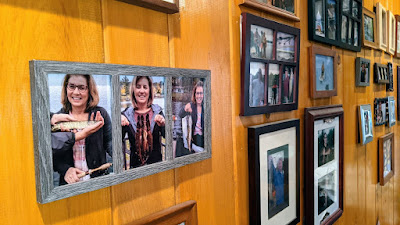 The smoked fish was great, and Wendy is now on the Fishing Wall of Fame. 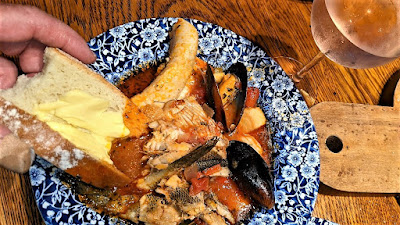 Cioppino is traditionally prepared with the day's fresh catch. Harlan continued that tradition with this - the first Big Shag Lake Yooper Cioppino.
Our fall trip to the lake house was wrapping up with visiting cousins Mike and Kris. We had some frozen bluegills from earlier in the season, as well as some more conventional cioppino sea food ingredients (mussels, shrimp, swordfish, salmon). It all needed to be consumed before our imminent departure. But we were lacking the fresh catch of the day.
There is nothing more likely to ensure a fishing expedition failure, than needing to catch a fish immediately for the next meal. And yet, with dinner mere hours away, Harlan defied the odds and brought back a nice 24" pike. 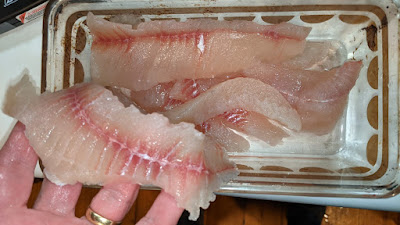 And the fresh catch of the day was immediately fileted and dropped into the most delicious Yooper Cioppino in history.
It was as good as it looks... 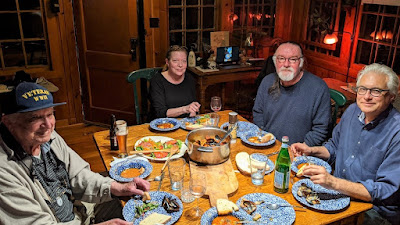 ... Actually better.  It's going to be tough to ever improve on this year's Piketarian diet.
Posted by mw at 11:40 PM