Why it's important to read the Michigan DNR fishing regulations.

Your loyal blogger has been on the receiving end of some commentary implying that something unseemly or even illegal was going on with the catch displayed in yesterday's post. This is why it is important for fishermen (and blog commentariat) to read the fishing regulations. I'm not talking about skimming the regs, but actually reading them in detail. Every year.

This is a lesson that I should have learned a few years ago, when I carefully read the regs in detail before fishing the Laughing Whitefish, while the DNR officer who wanted to bust me for fishing there apparently had not.

The Reader may recall that Dad and I (as well as other family fishing at the lake Memorial Day weekend) were catching then returning undersized pike to the lake. We thought the 24" minimum size limitation was still in effect. Here is the regulation we should have read. The regulation that only Papa out of all the fishermen in the family finally did read: 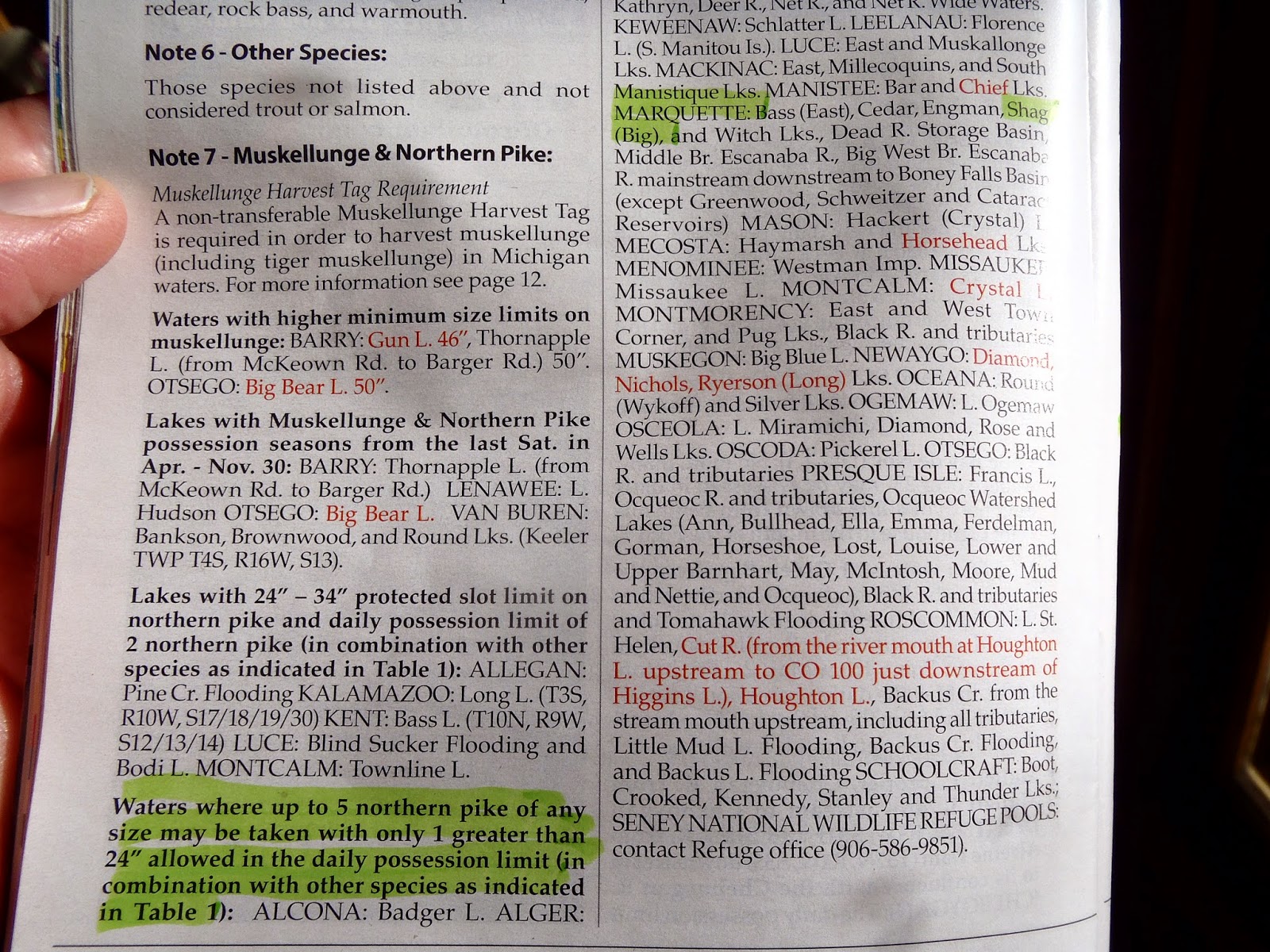 "Waters where up to 5 northern pike of any size may be taken with only 1 greater than 24" allowed in the daily possession limit (in combination with other species as indicated in Table 1): ...Marquette: Shag Lake (Big)..."

The rules have changed. It is the dawn of a new fishing era at Big Shag Lake.  Let us take a moment to look back for a little historical context.

The northern pike is an introduced (invasive?) species for this lake. The DNR did not introduce the pike into Shag Lake. Apparently some random fisherman decided 20 years ago that he wanted to fish for pike in this lake and took it upon himself to plant the shovelnose. It hasn't been the same since.

I first noted the pike and the changing nature of the lake in the Camp Journal on June 23,1996 saying "There are monsters here!": 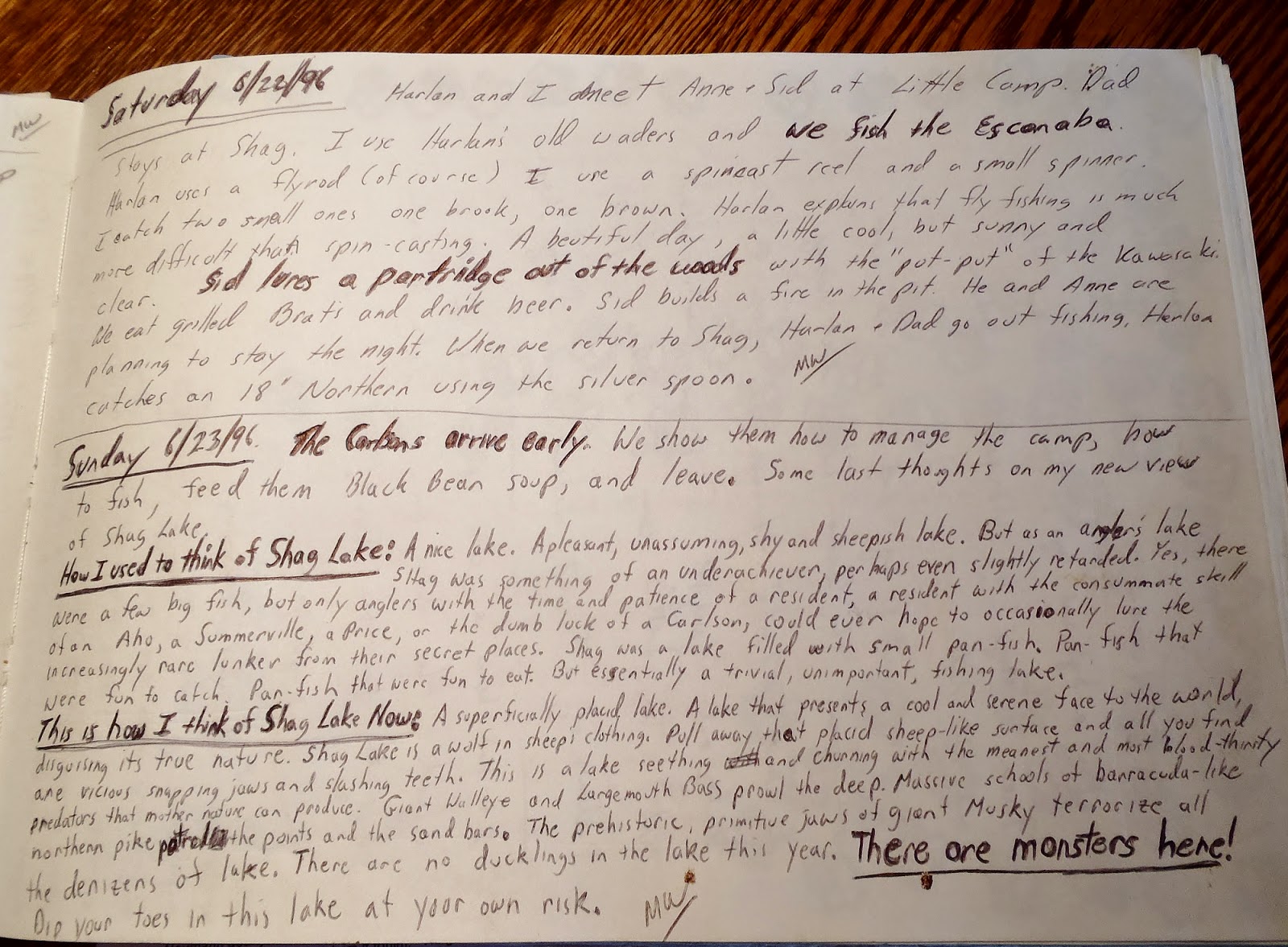 However, that wasn't the first mention of the pike in the historical record. Katie's August 1994 entry offers photographic proof that Roy was the first in the family to catch a pike in Shag Lake saying - "Roy caught a 15" Musky!" 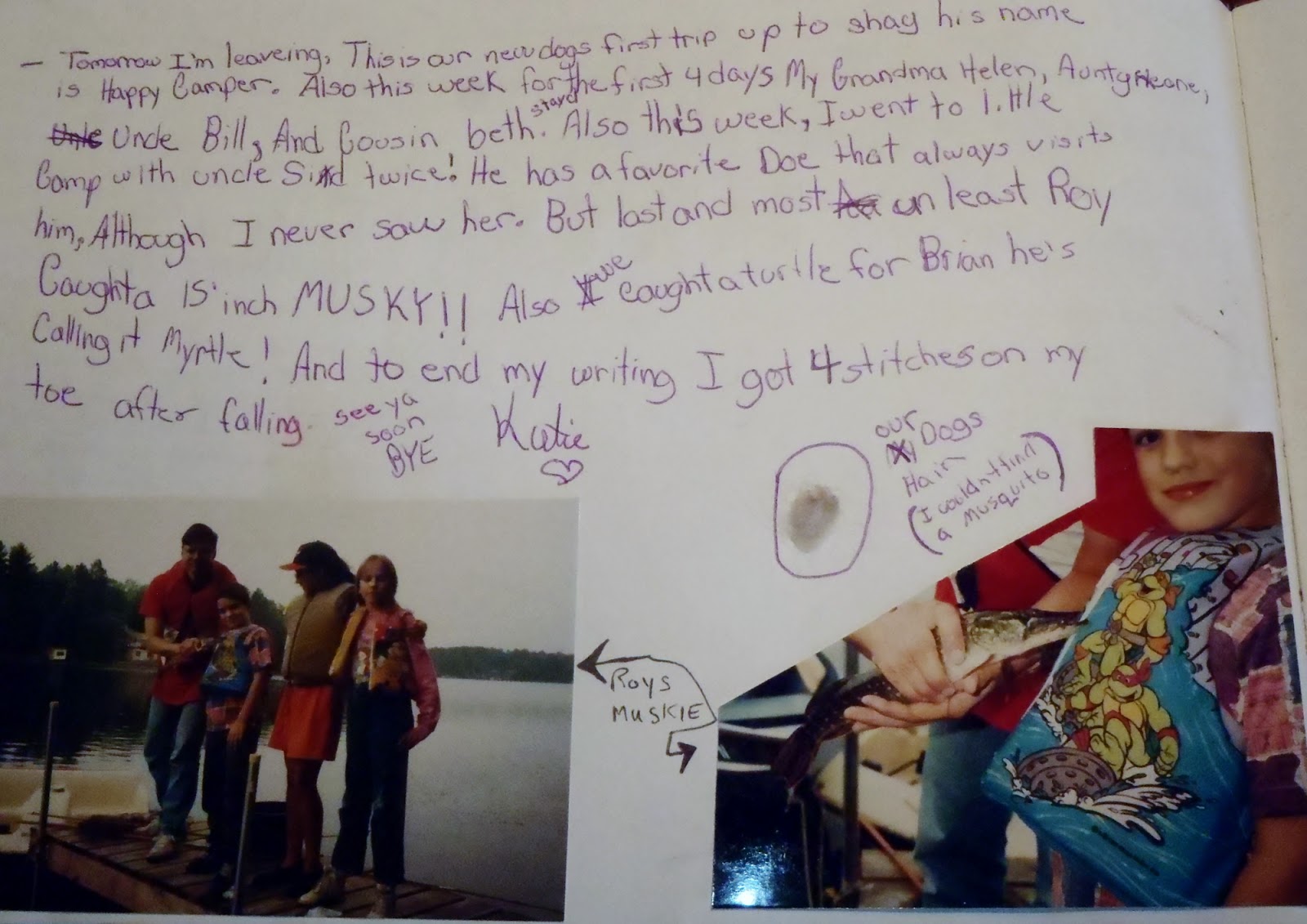 Typical. Roy has to be luckiest fisherman in the family, but he doesn't even  know what he is catching most of the time. It wasn't a muskie. It was a northern pike. He made a similar misidentification a few years later when he caught an undersized 35" muskie (legal size is 44") and claimed it was a lunker northern pike.  But I digress.

Once pike are introduced into a lake they are well nigh impossible to remove.  In California, an entire lake was poisoned and drained in an attempt to remove introduced pike.  So... it does beg the question of why there was a size limitation on the species in Big Shag Lake if they don't belong here.  There isn't any question anymore.

Welcome to the new fishing world at "Shag Lake (Big)": 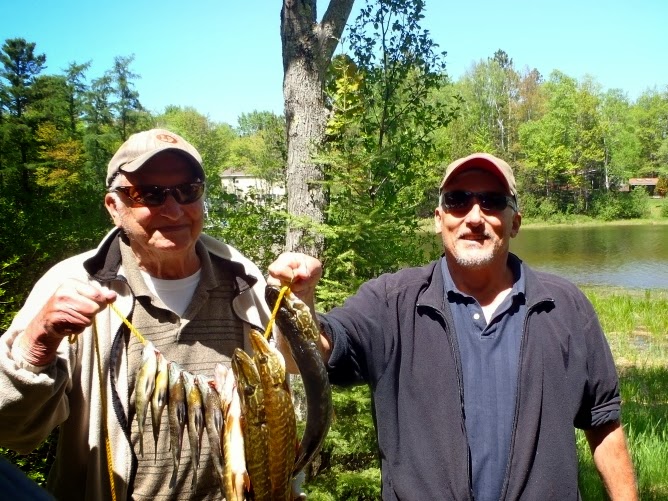 Last year these were undersized pike that the regs required returning to the lake. 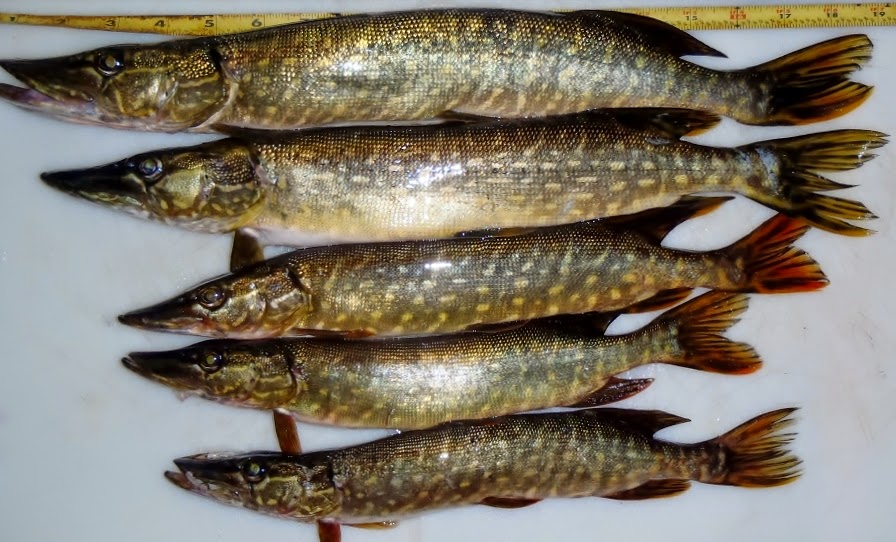 This year, they are one day's legal possession limit. The day's catch ranged from 9" to 19". 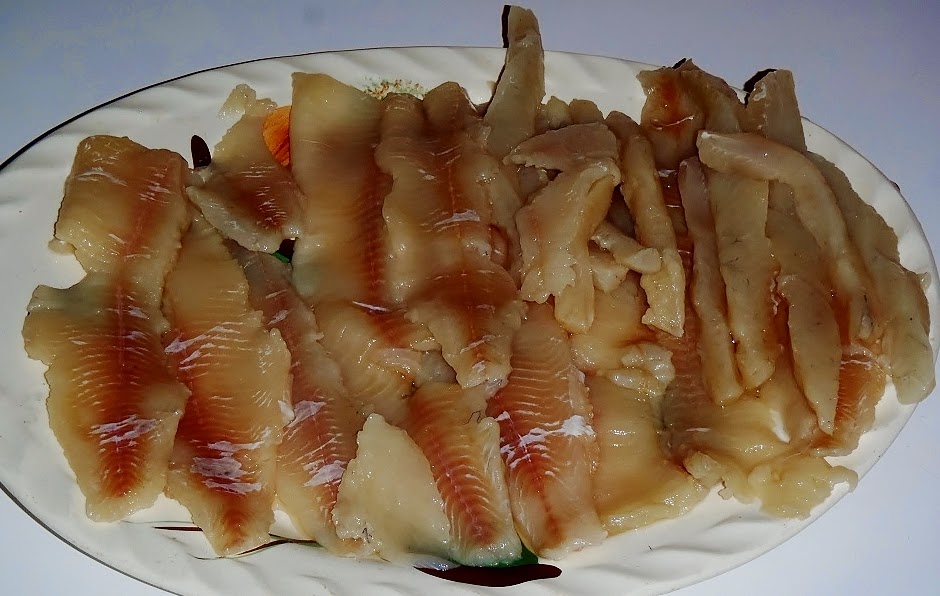 Fileting the smaller ones was a challenge. There just isn't that much meat on on a 9" northern pike - maybe four or five bites. We used about a 3rd of the catch. for our dinner. 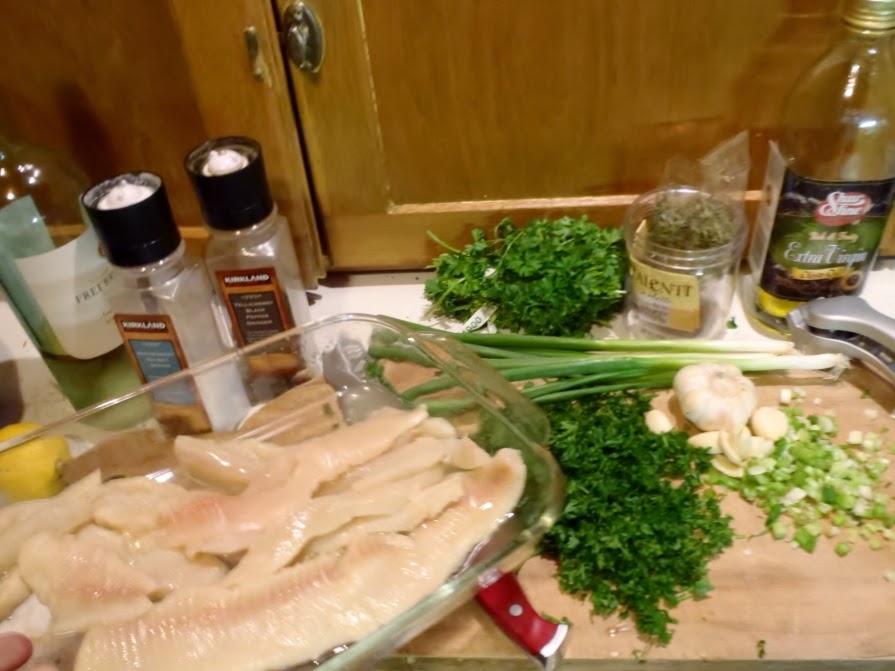 We went with the same recipe we tried last fall:

Our modifications included increasing the garlic (of course), using more olive oil than butter and adding white wine while the garlic, parsley and onion was simmering. Pretty quick and relatively easy. 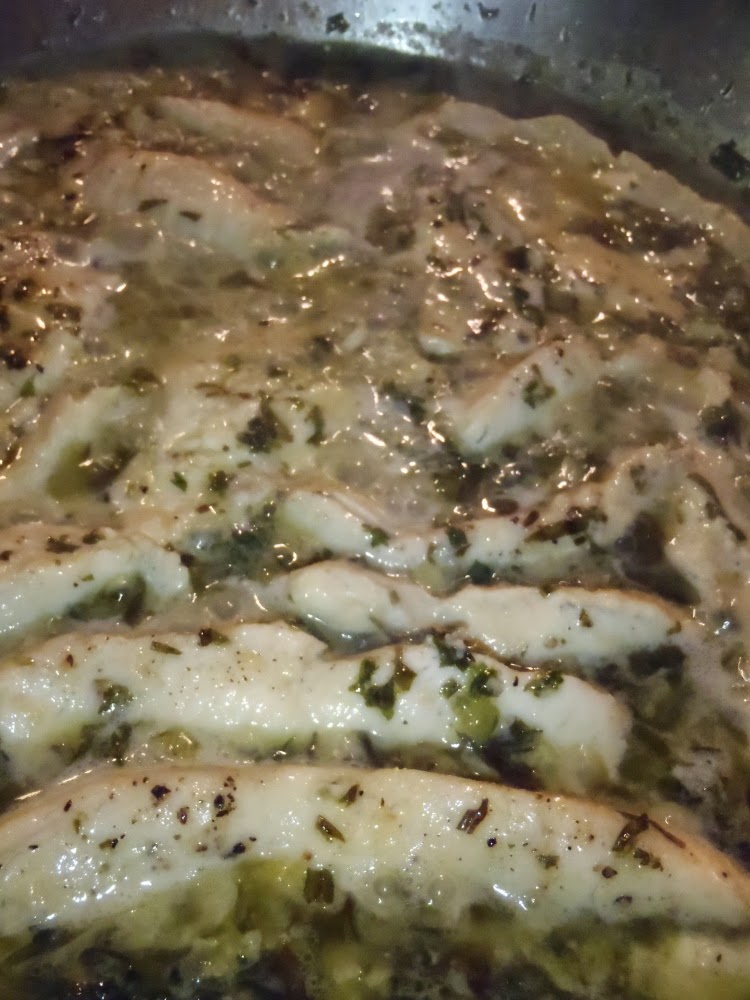 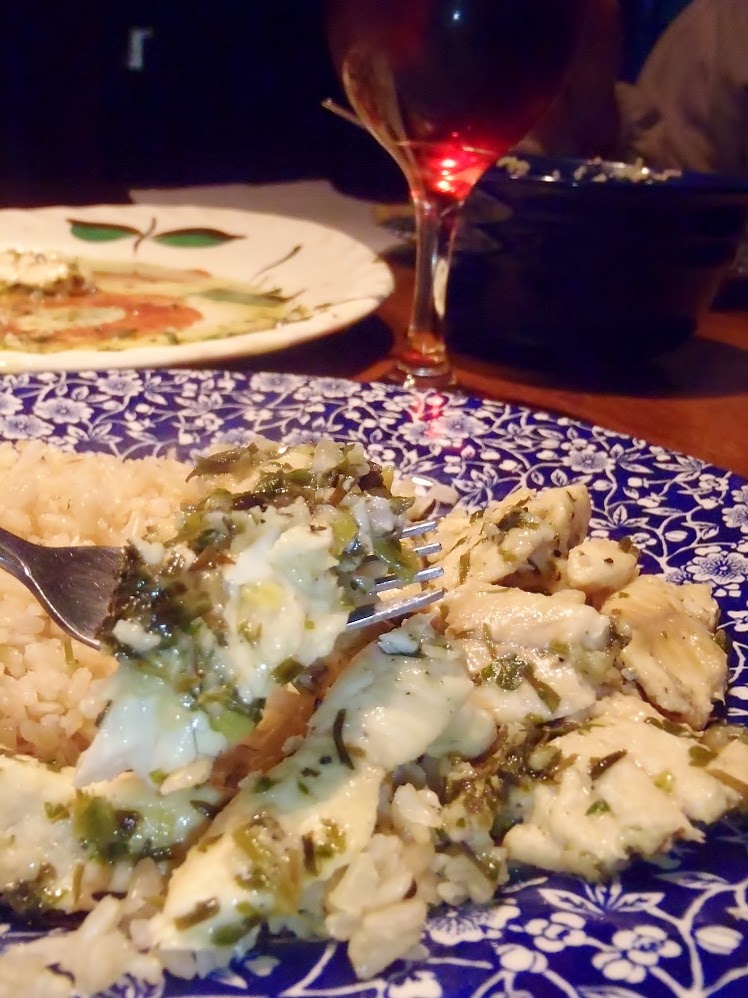