Dive Day 2 - One for the record books

Rick and Doug join Harlan and I for a Saturday dive.  There is already a lot history with this crew in this cove. Harlan got his first ab in this this cove, as did I. The less said about that the better. Doug has been a regular in the cove. Rick introduced me to ab diving in this cove, but it has been a few years since Rick was here.  His last trip in 2009 was less than productive.  Today we made up for it.  Sun was out. Swells were down. Viz was good.

It has been 9 years since we took our first abalone here. Since then we've made dozens of dives and taken a lot of of abs.  In all that time, only one documented trophy 10" ab has come out of the cove. Zach got it in in 2008. He even arranged to have it reported in the New York Times - somehow before it even happened.  But I digress.

Doug is the most experienced diver in the group and has been hunting abalone along this coast for 30 years. He explains:  "There are just some coves that are like this. Plenty of abs, plenty of 9's but tens just don't grow in this cove. I've looked everywhere. They are not here."

One in nine years. Two in twenty minutes. Go figger.

One interesting thing this trip...
I saw three abs lifting partially off their rock like the guy above. I don't recall seeing this before. Not sure what this behavior is about, but it sure makes it easy to grab and pull.  I didn't use my ab iron once getting six abs in two days. 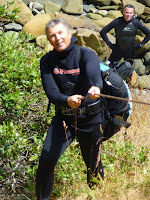 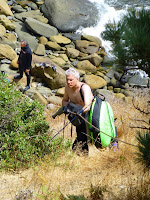 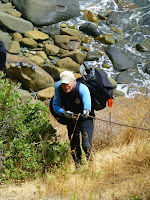 Of course, we've still got to haul those bad boys out.
By planning ahead, mine did not weigh as much as the others.

I've got some video clips I'll be adding later.  Credit to Lenny and Harlan for some of these pics which I ripped without attribution.  You'll have to figure out which ones are which.  Lenny posted more pics here.
Posted by mw at 7:14 PM