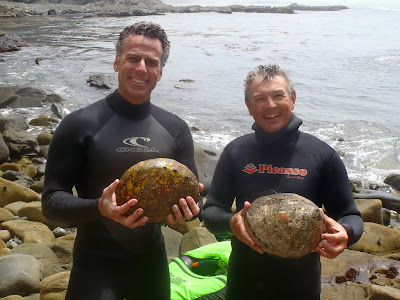 Is it too much of a cliche' to say size matters? I don't know, but after this weekend I am feeling rather inadequate.

Rick was particularly annoying. He spent the whole day walking around displaying his trophy ten.

Regardless, when you start comparing size it's important to be accurate. Rick had to know... 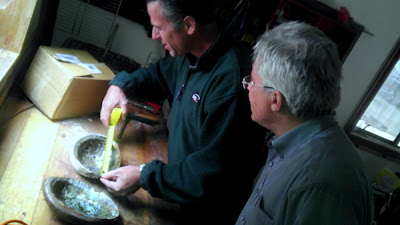 I was the bearer of bad news and informed Zach via e-mail. His reply: "There is shrinkage over time!" Hmm. Doug said the same thing. Apparently abalone shrinkage occurs when they are removed from cold water.  Weird.  Unfortunately for this theory, the measurement of Zach's shell on Sunday was identical to the measurement made in 2008.

And what about Doug's ten? We did not get a clean measurement before he split. He insted on the beach that his was barely ten, so we'll take him at his word.  It was smaller and he was ashamed.  But what do I care? I have been diving and taking abalone from this cove more than any of these guys over the last nine years and I still do not have a ten. Yes, I am a bitter bitter man.

UPDATE: This in an e-mail from Doug:  "Bad boy measured at 10 1/2 inches!!  Just put a tape on him.  Best one I’ve had in years!"  Sorry Doug. No pics and no independent  third party verification.  We have no choice but to accept your prior contemporaneous assertion on the beach: "It's just a ten."
Posted by mw at 9:22 AM