Chevron Refinery Fire - Not the usual view from the terrace 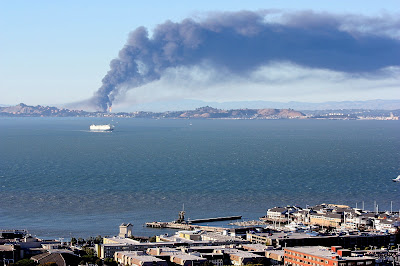 Whoa. This is happening now. Our view across the bay.  It's the Richmond Chevron refinery. Hope that everyone at the plant is alright, but I wouldn't bet on it. 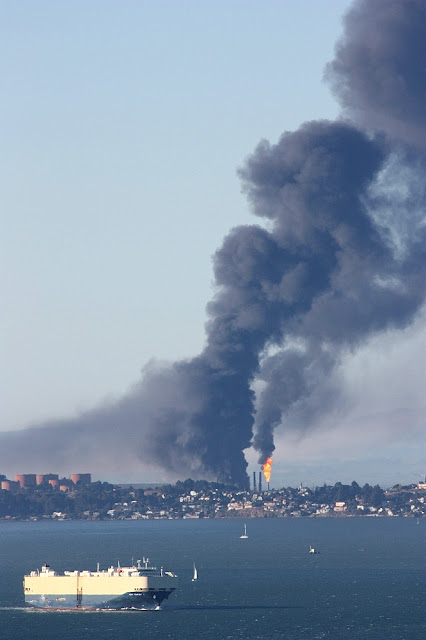 "RICHMOND -- Crews are responding to a large fire at the Chevron refinery in Richmond.  Flames and at least two large plumes of black smoke are rising five or six miles into the sky, drifting across the Bay. Flames can be seen from the Bay Bridge and from Jack London Square in Oakland. A shelter in place warning has been issued and BART has closed the Richmond station. Witnesses in the area reported hearing explosions in the area shortly before 7 p.m...."

UPDATE:
Good news is that Chevron is reporting no serious injuries. Amazing. From our vantage point the huge orange flame disappeared as darkness fell, but there was still a lot of smoke.  Unsurprisingly, a variety of  TV, print and blogospheric news venues are covering the fire with continuous breaking updates. including KRON 4 and  SFist:

9:05: According to Chevron official Nigel Hearne, "a leak caused the fire." No word yet as to how many gallons of diesel fuel have been burning. Firefighters are using nitrogen and steam to combat the fire.

9:10: According to an air official, the air is at "non detect"; however, four units from HazMat are in place at the scene.

Looks like they will be fighting the fire all night.

UPDATE II:
10:30 Just heard a Chevron spokesperson say that the fire is "contained".  Still burning. Still spewing smoke. But contained. And Free Tolls on the Richmond Bridge!  Nothing more to see here folks. Move along.

Good photojournalistic scoop. I heard/saw about it from you first.

The plume looks like it's headed directly south, so if I lived in that direction I'd be heading out of Dodge as fast as possible and crashing on a San Francisco friend's couch. That smoke looks seriously nasty.

Not that big a scoop. This was going on outside my window, and all I had to do was turn my head to see it. But... I did not notice it until I saw a "breaking news" segment on TV. Then I turned my head, looked over my shoulder and said "Huh. Look at that."

I need to look out the window more often.

So you're inattentive and take your view for granted. You still got (good) photos up before SFGate had any, and in my book that's a scoop.