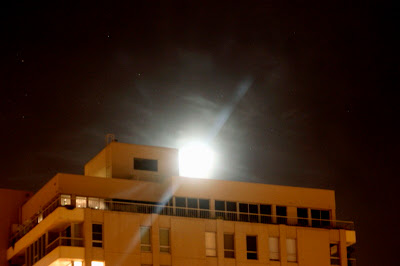 If I wake up in time. And the Weather is clear. And Twin Peaks is not in the way. Then we might see an interesting sight from our terrace. From the Chron:

"Early risers Saturday will see a total eclipse of the moon low in the western sky, and if the Bay Area's clear weather persists, the sight should be spectacular. "The full moon should appear even larger than normal when the eclipse is total because it will be so low in the sky that Earth's atmosphere will magnify it into a blood-red monster," said astronomer Andrew Fraknoi of Foothill College in Los Alto Hills. The partial eclipse will begin at 4:45 a.m. and will become total at 6:05 a.m., Fraknoi said. Totality will last until 6:57 a.m.After totality, however, the moon will be setting and too far below the horizon for Bay Area viewers to watch as it emerges from Earth's shadow. "To watch it all as the eclipse becomes total, you'll need a clear view of the moon as it nears the horizon in the west," Fraknoi said. "Even from my house in San Francisco there's a big hill that will block my view, so I have to climb the hill to watch it."

I better get to bed now. 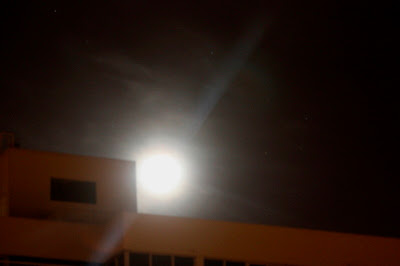 Got up in time. Weather was clear. Planning left something to be desired.

The eclipse was perfectly visible from our terrace and the moon about half consumed when it dropped behind a neighboring high-rise and stayed there for the balance of the event. I also could not get a decent shot with Sigrid's camera. These shots of the moon are just a blob, but looked in focus through the lens while the moon was visibly half eaten to the naked eye.

Better luck next time. It looks like we'll have a shot at an annular solar eclipse a short drive from here (5-6 hours) next May 20. We'll be ready for that one.
Posted by mw at 12:32 AM

Email ThisBlogThis!Share to TwitterShare to FacebookShare to Pinterest
Labels: Eclipse, From the Terrace, San Francisco