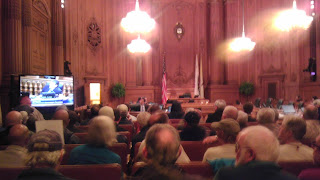 The game continues. I am at the open public hearing on the John Avalos ordinance to give Sharp Park to the feds and destroy the course. Mostly this is more of the same specious arguments we have been hearing from the WEBLEEDU Axis over the last 3 years. 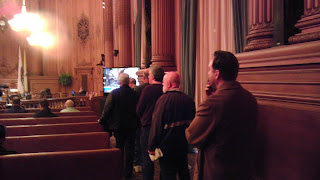 The Sharp Park ordinance was item 8 on the agenda, which meant I had to hang out for over 5 hours to see it through to the end. Jon Avalos chairs this committee and tried to arrange it to minimize the participation of those that support the course. That included scheduling the Sharp Park item for the end, and placing one of those useless "Only in EssEff" resolutions immediately before Sharp Park was considered - this an Avalos sponsored resolution to End the War in Iraq and Afghanistan and return all moneys spent on the war to San Francisco Social Programs. At least I think that was the resolution, because it sure seemed all the dozens of public supporters commenting thought that was what was going to happen to Department of Defense monies if our Supervisors pass this resolution. I saw a number of the Sharp Park golf supporters eyes glaze over during this agenda item and leave saying they had to get back to their jobs.

The one new element coming out of this hearing was learning the extent to which Jon Avalos and his supporters have tried to disguise and obfuscate the real purpose of his ordinance and bypass the Environmental Impact Statement that should be required for a vote on any action of this scope. In their rush to get a vote in front of the Supervisors to destroy the course, the WEBLEEDU Axis are twisting themselves into knots to avoid the required environmental impact regulations. You read that right - these "environmentalists" are trying to avoid a legally required Environmental Impact Statement. It is really unconscionable.

There was a classic exchange between Supervisors Sean Elsbernd and Avalos before public comment began that set the tone. Ellsbernd tried to get Avalos to come clean about the reason for his parliamentary machinations and legal sophistry pushing this ordinance to a vote now. Avalos was really squirming. It would be funny if it wasn't so sad. Okay it was funny anyway. When they get the video posted on SF GOV, I'll excerpt it here.

This begs the question - Why the panic to get this voted on now? Apparently the vote will take place tomorrow December 6 at 2ish. This is "warp speed" for a San Francisco Board of Supervisors vote. Then it struck me. This is likely to be a very close vote. Supervisor Ross Mirkarimi will be Sheriff in January opening up his Supervisor seat. Mayor Ed Lee will appoint a replacement to finish his term. That will be a lost vote on the Board of Supervisors for the WEBLEEDU Axis. Moreover, Supervisor Eric Mar is up for re-election in District 1. He has a lot of Sharp Park golfers in his district. They would not be happy if Eric Mar votes for this ordinance to destroy Sharp Park. However, Eric Mar has shown a distinct tendency to show more loyalty to John Avalos than to his own constituents. He either votes against, or he loses his seat. All this points to one conclusion - it is now or never for this vote. This is the very last chance to get a political victory for the WEBLEEDU's, who are in the midst of a three year losing streak.

UPDATE:
Camden Swita at Pacifica Patch does a nice job covering the hearing. I know it is quality work because he actually quotes me in the piece:

"U.S. District Judge Susan Illston ruled that the frog population had actually increased in the area in the past 20 years, and that there has only been one confirmed case of a snake killed on the course six years ago.

Some of the speakers who attended today's committee hearing in opposition to the proposal cited the judge's ruling and said the environmental impacts of the golf course are overblown.

Others, including Mike Wallach, a San Francisco resident of 25 years, said the course is a historical resource that must be maintained. The course was designed by Alister MacKenzie, who has also designed several world-famous courses, including Augusta National Golf Club in Georgia.

"Sharp Park is a gift to the people of San Francisco," Wallach said. "It's a historic landmark by any standard, and doesn't belong to the Board of Supervisors, it belongs to the people."

Several other speakers cited it as one of the few cheap, full-sized golf courses in the area, referring to it by its nickname, "the poor man's Pebble Beach."

Along with opposing viewpoints among the speakers, things got chippy during the hearing between Avalos and fellow committee member Sean Elsbernd, who opposes the plan.

Elsbernd accused Avalos of "gamesmanship" by only calling up supporters of the proposal in the first dozen or so speakers."

I always have a tough time in this kind of hearing trying to say what I want to say in the allotted two minutes. So I'll just use this space to replay my comments and amplify on what I intended to say:

"Sharp Park does not belong to the Board of Supervisors and Sharp Park is not a political chip to be disposed of by an ambitious board supervisor.

A vote to give away this historic landmark legacy of the people of San Francisco is nothing less than a betrayal of our City and the past, present, and future citizens who live here. "

Yeah - that's what I wanted to say.

The Avalos Ordinance would direct the Rec & Park Dept. to offer to close Sharp Park Golf Course and enter exclusive negotiations with the GGNRA to take over Sharp Park. The GGNRA has already announced it will not operate a golf course at Sharp.

NOW is the time for golfers and their friends and families to come to the aid of affordable public golf and the legacy of Alister MacKenzie at Sharp Park.

Bring your friends, family, and foursomes. Be early.

If you plan to attend, PLEASE RSVP via Email by clicking here. Please include your name and phone number.

Sent from my HTC smartphone
Posted by mw at 2:52 PM