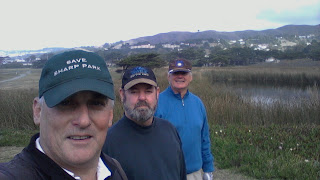 On the tee of the 17th hole (5th hole of the original Alister McKenzie layout), with fairway running along Laguna Salada. 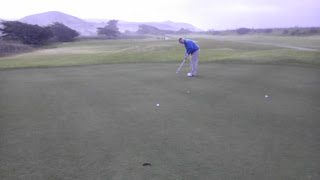 And Bob leaving his birdie putt short on the 17th green.

"This hole was one of two that MacKenzie modeled after his famous "Lido Hole“ the design entry he submitted in 1914 to Country Life magazine that launched his career. A lakeside hole and one of the most interesting holes on the course, similar to Dr. MacKenzie’s ideal golf hole [a reference to the Lido Design]. Three tees, four routes. Easy route probably will cost at least one extra stroke to get on while the other combinations of tees and routes give rewards proportionate to their respective risks."