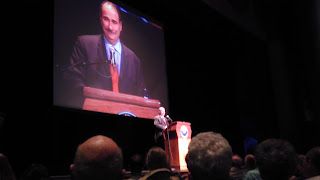 At the Marin Civic Center to see David Axelrod speak at the MPFS Lecture Series. 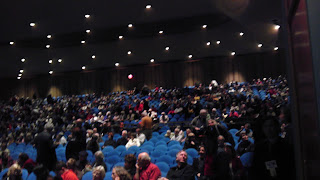 This was my first opportunity to see a speaker in this series at this venue. By the time Axelrod took the stage every seat was filled. I'm impressed. It is a great series and venue. I'll be back.

As for Axelrod himself, I'll probably have more to say later, but will make a few general comments now.

He speaks from notes and has a low key, matter-of-fact, conversational speaking style that lulls you in. He is a more effective communicator in a venue like this than in a "talking head" close-up on TV. On TV I find his style to be transparently manipulative, invoking a classic huckster. Here, looking up from a comfortable auditorium seat, you tend to want to uncritically accept everything he says. It is easy to fail to notice that outside of a few anecdotes, the content is standard Democratic partisan talking points. But let's be fair - he is after all running Obama's reelection campaign - what else would one expect?
This being Marin, California - the choir was very receptive and appreciative.

One other note - Despite my preconceived expectations, I can confirm from my front row vantage point that David Axelrod does not, in fact, have horns.

Sent from my HTC smartphone on the Now Network from Sprint!
Posted by mw at 11:40 PM