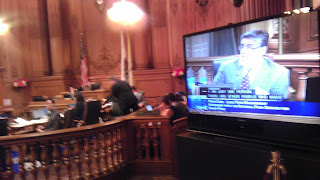 I am back at City Hall to see the vote on the Avalos ordinance to destroy the Sharp Park golf course and give our coastal park land to the Feds. There are 11 supervisors on the board. Six votes are needed to pass. Columnist CW Nevius thinks the votes are there, but it is a meaningless vote, as it will not survive a Mayoral veto or a court challenge.

Still, in the years I have been following this clusterfork, this is the first time I recall that the full board has voted directly on the issue at hand. I understand there will be no public comment, but wanted to see an actual vote, meaningful or not. So I'm back in City Hall to watch it happen.

Listening to Avalos now, he is softening the language considerably with an amendment. This is apparently intended to solve the EIR legal issue.

Now David Chiu is offering another Amendment to further soften the language.

Both are saying that now this ordinance is only assuring that all options are being explored - including destroying the course and giving it away to the feds. Sean Elsbernd calls bullshit. He says these amendments are eyewash - meant to disguise the real purpose of the ordinance. I trust Elsbernd, but it looks like Chiu has the votes lined up.

The Supe roster is cued up for the ayes and nays:

Nevius was right. It passed 6-5

Not sure if I got the votes exactly right - will correct later if I missed it [CORRECTED]:

Like I've said before. No one who casts a vote to give away this park deserves to serve in any public capacity in the City. But, it is axiomatic we get the government we deserve. We elect them, we have no one to blame but ourselves.

It is a 6-5 vote. One vote changes the outcome. Mirkarimi will be off the board in the new year. That is a very good thing. He can do less damage as Sheriff than what he can do on the Board. Eric Mar is up for reelection and vulnerable. He is out of step with his district and constituency. A concerted effort and he'll be off the board this time next year.

My understanding is that this was a vote on "First Reading." It must be submitted to another vote, probably next week, for the ordinance to pass. The language of the ordinance cannot change between first and final, or the process starts over. The way they threw last minute changes at this, it's possible that a detailed reading will find a flaw that will push this into next year with Mirkarimi off the board. If that does not happen a veto by Mayor Ed Lee is the next best hope. There are not enough votes on the board to overcome a Lee veto.

On to the next round.

UPDATE:
Corrected typos, fixed the vote count, added thoughts and links.
Sent from my HTC smartphone on the Now Network from Sprint!
Posted by mw at 4:35 PM

it will not survive a Mayoral veto or a court challenge?

Anon,
I think you are correct, but I am not sure that Lee will veto it. We can only hope.

What a sick and perverted puppy. Lying about the environmental FACTS to support an unsupportable golf course which is being actively reclaimed by the sea, while smearing hated "Environmentalists" and science to rationalize his sick but deeply held perversions!

Thank you Raul,
Your comment illustrates perfectly the essence of those who would destroy Sharp Park:
Ignore the facts, ignore the science, pretend the environmentalists who support the RecPark plan to restore the habitat while keeping the course do not exist, parrot sound bites from your glorious leader without critical thought, and engage in name calling.

The intellectual content in your comment is the equivalent of a two year old throwing a temper tantrum.