2 hours before the mast 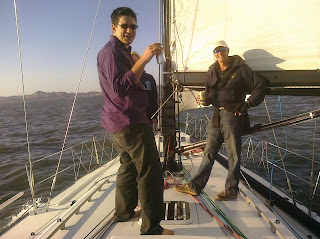 We don't know what that means but we assume it has something to do with last call.

Actually Jeff, this was a literary reference to the 1846 R.H. Dana best seller "Two Years Before the Mast". I am surprised you are not familiar with this American classic. Don't feel bad, you are just another victim of the public education system. To belatedly expand your horizons - an excerpt where Dana describes sailing these same waters 175 years ago:

"It was in the winter of 1835-6 that the ship Alert, in the prosecution of her voyage for hides on the remote and almost unknown coast of California, floated into the vast solitude of the Bay of San Francisco. All around was the stillness of nature. One vessel, a Russian, lay at anchor there, but during our whole stay not a sail came or went. Our trade was with remote Missions, which sent hides to us in launches manned by their Indians. Our anchorage was between a small island, called Yerba Buena, and a gravel beach in a little bight or cove of the same name, formed by two small, projecting points. Beyond, to the westward of the landing-place, were dreary sand-hills, with little grass to be seen, and few trees, and beyond them higher hills, steep and barren, their sides gullied by the rains. Some five or six miles beyond the landing-place, to the right, was a ruinous Presidio, and some three or four miles to the left was the Mission of Dolores, as ruinous as the Presidio, almost deserted, with but few Indians attached to it, and but little property in cattle. Over a region far beyond our sight there were no other human habitations, except that an enterprising Yankee, years in advance of his time, had put up, on the rising ground above the landing, a shanty of rough boards, where he carried on a very small retail trade between the hide ships and the Indians. Vast banks of fog, invading us from the North Pacific, drove in through the entrance, and covered the whole bay; and when they disappeared, we saw a few well-wooded islands, the sand-hills on the west, the grassy and wooded slopes on the east, and the vast stretch of the bay to the southward, where we were told lay the Missions of Santa Clara and San José, and still longer stretches to the northward and northeastward, where we understood smaller bays spread out, and large rivers poured in their tributes of waters."