There was a remarkable press release from the Center for Biological Diversity yesterday. Remarkable for it's lack of professionalism, its reliance on ad hominem characterizations, and the general pissy tone of the release. It comes across sounding as nothing so much as a two year old throwing a full-on screaming tantrum when told there will be no candy before dinner. Check it out - these quotes highlight how the CBD conducts a policy argument, attacking the SF Rec & Parks report with unsupported smears and labels - and in a press release no less:

"Surreal Report"
"a deeply flawed and incomplete alternatives report"
"omission of any credible discussion"
"deliberate attempts to constrain the scope of the report"
"lack of any expertise"
"unprofessional mixing"
"incapable of any objective analysis"
"The report is extremely unprofessional"
"embarrassing to the city"
"ecological illiteracy"
"a complete and willful misunderstanding"
"inexcusable misunderstanding of and unfamiliarity"
"the City’s so-called “expert”
"what are they trying to hide?”
"deliberately inflates the costs"
"absurd and unjustified"
"outrageously proposes"

It goes on and on, but you get the idea. To be fair, argumentum ad hominem is not the only logical fallacy employed in the press release. When they are not name calling, they rely extensively on argumentum ad verecundiam, specifically appealing to the authority of - you know - themselves and the "usual suspects" of a handful of scientists closely associated with the CBD. This is not surprising. CBD is a environmental litigation house, not an ecological research center. Their "science" is in the service of their lawsuits, and not vice versa.

In general, CBD scientists are the equivalent of paid expert witnesses and CBD arguments are primarily courtroom tactics. This is not to say the perspective of the CBD scientists should be discounted simply because of their historically close ties and/or employment/contracting association with CBD. To the extent they are scientific arguments and not legal arguments, they will stand or fall on their own merit. However, given the close association with CBD, it is perfectly reasonable to look at their pronouncements with the same skepticism as those of - say - an Exxon scientist explaining why it is now safe to drill off the California coast.

Perhaps I am being a bit harsh calling this "press release" a tantrum. Lets see what The American Heritage® Dictionary says:

Still, knowing they are throwing a tantrum does not explain why. We need to do a little more analysis. Perhaps seek out the advice of experts:

"Causes [of tantrums] include frustration, tiredness, and hunger. Children also may have temper tantrums to seek attention, obtain something, or avoid doing something."

Now it makes sense. Things are not going well for the CBD pet project, Restore Sharp Park Destroy Sharp Park Golf. In recent weeks the Chronicle has come out in support of the golf course, as has columnist C.W. Nevius. Nancy Wuerfel wrote a scathing report and Op Ed undermining the CBD contention that the course loses money for The City. It doesn't. Finally the SF Department of Rec and Parks released the report recommending continuing the 18 hole course that triggered the CBD tantrum. Congresswoman Jackie Speir has since weighed in supporting the report and the golf course. CBD is frustrated and is realizing they may not get what they want - the destruction of the course.

I also attended the "Save Sharp Park" fundraiser, and it was an eye opener. The room was packed shoulder to shoulder with young and old, men and women, Pacificans and San Franciscans, golfer and non-golfers, all in all a very diverse group that included a strong showing by San Francisco and Pacifica members of Local 261 Laborers Union. I was proud to be there with this group.

Also at the event and blogging - Barbara Arietta:

"From observing the fervor of Thurday night's crowd, the effort to help save Sharp Park Golf Course appears to be catching on substantially. The phrase, "Save Sharp Park Golf Course!", could be heard on everybody's lips as one walked through the crowd... A quick scan of the audience looked like a page from "Who's Who" in both San Mateo and San Francisco Counties political circles. Standing in the front of the room off to the side was Supervisor Sean Elsbernd from San Francisco (One of the most important Supervisors in San Francisco, if not the most important, as far as the golf course issue is concerned) He was in deep conversation with the City Attorney of San Francisco, Dennis Herrera, who is rumored to be running for Mayor of SF next year. Both gave very strong speeches. In the same location in the front of the crowd could be seen San Mateo County Supervisor Carol Groome from San Mateo County's 2nd District, Don Horsley, San Mateo County Supervisorial candidate for the 3rd Supervisorial District seat, Joe Galligan, San Mateo County Treasurer Candidate, Mark Hershman, District Director for Assemblyman Jerry Hill of the 19th Assembly District, along with a number of Administrative Supervisorial staff from both San Mateo County and San Francisco County, in attendance."

Barbara saw and felt what I did at the fundraiser. It was the first time I felt optimistic that the good guys might win this thing. Some pictures from the evening: 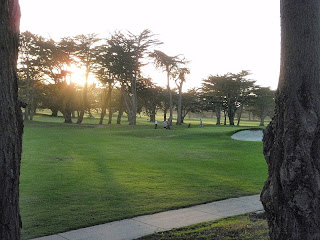 I arrived at sunset, and spent a few minutes jealously watching some golfers finish their round. What a beautiful course. 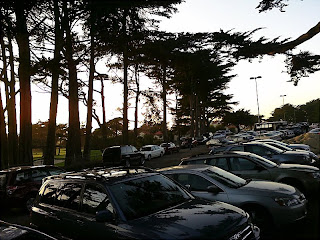 A long way from the clubhouse, and the parking lot was packed. 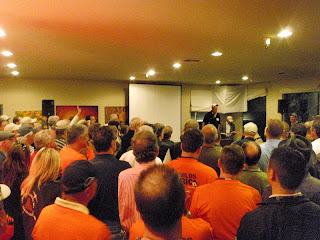 The room was SRO, with the enthusiastic orange shirted members of local 261 swelling the ranks.
I also shot some video clips, and will update this post if I ever get around to editing them. It was a great night. With this kind of a turnout, with this kind of political support, we can expect more hissy fits from the Center for Biological Diversity. Perhaps more expert advice will be helpful:

How can you deal with temper tantrums?
"Ignoring the tantrums and helping a young child learn how to deal with anger and frustration are often good ways to deal with tantrums. Pay attention to what starts the tantrums... you may need to use a technique called time-out. A time-out takes the child out of the situation and gives him or her time to calm down. It also teaches the child that having a temper tantrum is not acceptable behavior. "

I'm afraid that ignoring CBD has not been effective so far, and although they need a "time out" I don't think it'll stop them from acting out. They are going to lose this battle and then they are going to sue. I say - bring it on.

We have a lot of problems in The City, but a shortage of great lawyers is not one of them. No court is going close a 77 year old landmark historical course that is working in good faith to protect wildlife. A good spanking in court might teach CBD a little manners. It also may give some of their contributors pause.They should ask themselves if there is not a better use of their environmental donations than funding a jihad against a public, affordable, historically important landmark golf course enjoyed by thousands of Bay area blue collar working stiffs, students, and retirees from all walks of life.
Posted by mw at 12:01 AM