For the ceremonial opening of the first bottle of Escanaba Pail Ale (#19), Mike K, Emily, Matt and Olive made the pilgrimage to the place of the brew's birth - lil' camp on the the Escanaba River. 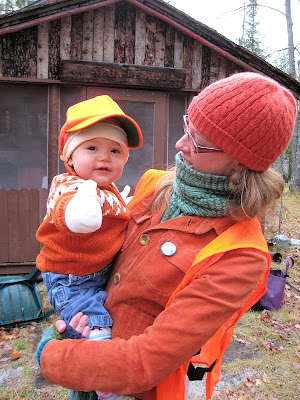 The Chief Quality Officer was on hand to follow up the fruits of her handiwork. 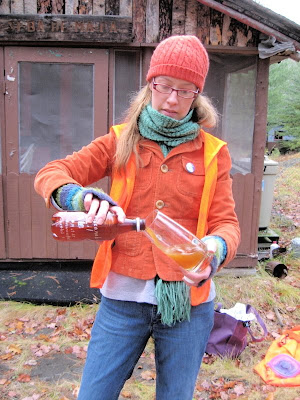 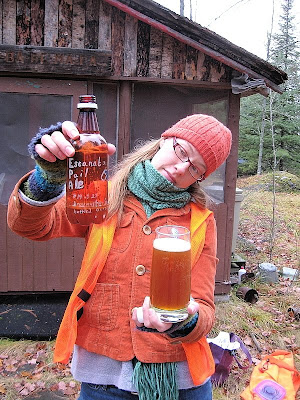 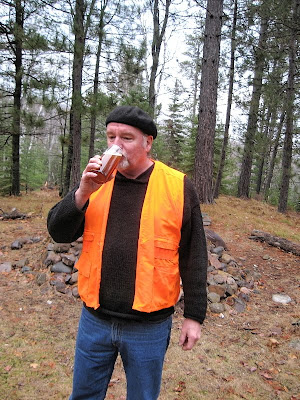 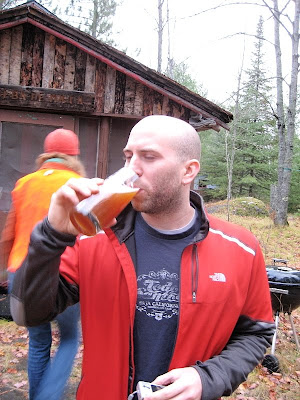 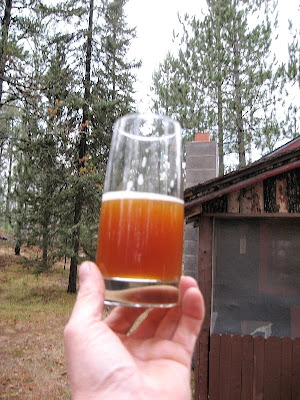 Clarity was sacrificied in the trek to the source. 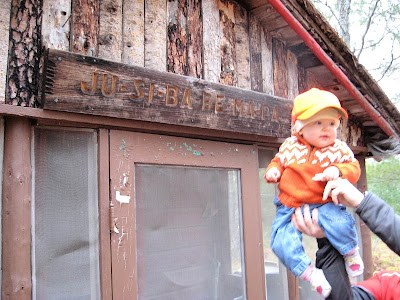 "The EPA tasting took place at the height of deer season. As we approached Lil Camp hunters in blaze orange littered the landscape like so many brightly colored plastic bags clinging to the underbrush. We all dressed accordingly.

The beer, Escanaba Pail Ale, although somewhat cloudy with some sediment, had a surprisingly vigorous head. The taste, mellow, more like a Scottish ale, had an aftertaste of the river. There was no suggestion of hops. I'll be curious as to how some aging will affect this brew." - MK

Meanwhile, on the left coast... 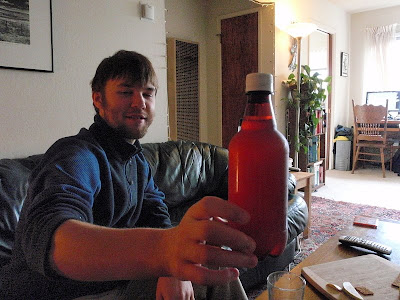 The brewmaster assembled an elite cadre of premier west coast beer connoisseurs for the auspicious event. 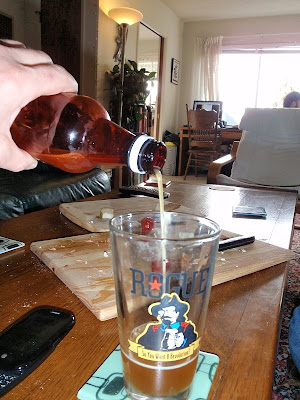 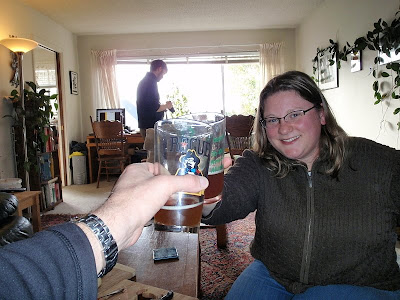 The toast and first taste. 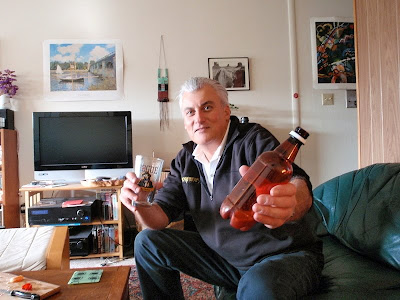 The last sip of #5
The verdict: Delicious but not what we expected.

In contrast to the report of #19 sampled at lil' camp, #5 had a weak thin head. Apparently variation in the quality of bottle seals will be found across this batch. In my refrigerator, the #7 bottle is soft and easily dimpled, #23 is solid and resists pressure. It's a crap shoot. Best of luck to all recipients.

The ale glows with luminous honey amber warmth. It is an approachable, easy drinking, and - dare I say - affectionate ale. If judged by the expectations of a robust IPA, it will disappoint. The brew is, frankly, starved for hops. I blame HDW, whose insane non-stop e-mail rants about overhopped ales during the long pre-brew preparation process apparently intimidated our young and impressionable brewmaster.

That said, if considered on its own merits and without prejudgment, this is a unique brew. MK notes a similarity to Scottish Ale. I find the color and feel more reminiscent of a Belgian Ale, without the alcohol kick. A geographical compromise puts this brew somewhere in the North Sea. But that is too cold for this confection.

Welcoming and inviting, the malt provides a floor on which apple and anise dance a pas de deux across the palate. Subtle hints of yet to be recognized flavor notes echo faintly from the orchestra pit perhaps to emerge with aging in the second act. Just when you think the pleasant but unremarkable orchestration of flavors is fading away, a crescendo with the shimmer of steel leaves the drinker with a biting fatalistic aftertaste of rust that never sleeps. It is a lingering reminder of and returning us to the minerals buried in the ground through which the Escanaba River flows.