SF Golf Wars: Where does the money go?

Things are coming to a head with the recent release of the long-awaited SF Rec and Parks Department Report and a scheduled SF Rec and Parks Commission meeting to vote on the report (This Thursday 11/18 at 2pm Room 416 at SF City Hall - hat tip - Fix Pacifica Blog). I'll be there. If you care about Sharp Park Golf, you will be too. The report recommends that Sharp Park continue as an 18 hole golf course, but be modified to further protect the frog and snake habitat. This has stirred up a lot of media coverage and I'll have more to say about recent twists and turns in this saga. But first, we need to catch up on a few of the significant skirmishes over the last couple months.

What may ultimately prove to be the most significant single shot fired in the the Sharp Park fire fight, was the perfectly targeted sniper shot fired by Nancy Wuerfel in a San Francisco Chronicle Open Forum piece last month - "The Case for keeping Sharp Park":

"The course and the endangered frogs and snakes have co-existed for years. Sensitive management practices will allow golf (or other recreational uses) to continue while also supporting these rare species. Other cities manage to do both. We can, too. Claims that city golf courses lose money are just not true. I analyzed the financial information for the first six years of the city's Golf Fund. The Recreation and Park Department's accounting practices have created the appearance that Sharp Park golf course is losing money when it is not. These findings were submitted to the Recreation and Park Commission and the Recreation and Park Department."

For good measure, Nancy also noted that the region is losing federal funds and jobs for the potential "Pipeline to Nowhere" as a direct consequence of The City's lack of support for the golf course. If Supervisor Mirkarimi gets his way and The City divests itself of the course and park, the stimulus money and the jobs for this shovel ready project will be lost.

"If the city hands over control of the property to the Golden Gate National Recreation Area, the San Francisco PUC's project to bring recycled water to Pacifica will be jeopardized. The Sharp Park golf course is critical to the project because it would use 80 percent of the water. Without this "ready customer" for the water, the project is on hold. Also on hold - and at risk of being lost - is $2.2 million in federal stimulus money already secured to build the recycled water infrastructure."

Until reading this essay, I was not aware that the project was on hold pending the decision of the Board of Supervisors. As far as I can tell, your loyal blogger was the first to highlight that specific issue - here, here and here. Just goes to show, even a lightly trafficked blog like this can serve to get the right idea in the right hands, for a right result. I have nothing against this project, but it is a foolish waste of money if the Board of Supervisors supports Mirkarimi's foolish proposal.

But I digress. The water recycling project is a side show. In the center ring of this circus is the accounting malfeasance exhibited by the handling of the San Francisco golf fund by representatives and employees in our city over the last six years. Nancy Wuerfel backed up her assertions with a comprehensive, detailed 39 page report submitted to the department. I've read the report. It is authoritative, well documented, completely convincing and utterly damning. It should be required reading for the Mayor and every Supervisor. Some excerpts: 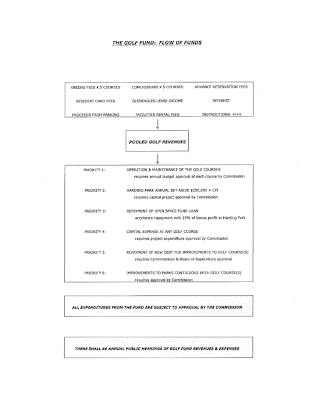 "This report began as an examination of the accounting of the Golf Fund (Fund) to answer the question: "Does the Golf Fund make or lose money?" The short answer is that the Fund does pay its operating expenses (without General Fund subsidy) when Golf Fund Ordinance guidelines are followed."

"...the question of whether or not the land currently occupied by golf courses should continue as golf courses or be converted to another use is a policy issue and is not addressed in this report. However, those decisions should be based on good, accurate accounting of the real expenses and revenues generated by the courses. RPD's current accounting practices do not provide policy makers with the information they need to make these decisions. Accountability for funds and transparency of their uses are missing from RPD’s handling of the Golf Fund. Mischaracterizing expenses as Operating costs when they are actually Capital costs is wrong. That a vendor’s invoice was appropriate to be paid is NOT the issue. That the payment of building cost overruns was hidden as an expense of running the golf courses IS the issue. That there is a flawed mechanism in our City government that allowed this to happen IS the issue. That no one is watching over the agreements with the public IS the issue."

"The golf revenue was understated due to internal practices that allowed operating expenses to be paid off the top. When this bad accounting is corrected, it is evident that revenue has been sufficient every year to pay the first priority costs of golf operations and maintenance. The bad accounting has been used to promote Prop J privatization of the golf courses and, potentially, the give away of Sharp Park to the federal government. When this bad accounting is corrected, different questions emerge as to why these actions are even considered."

"RPD created a golf finance problem by inaccurate accounting and by not properly implementing the Golf Fund and other City Ordinances. These management issues are correctable. Rather than allow the Department to pursue solving this golf problem by giving away public lands to long- term lessees to manage, I wish to propose an alternative approach in which RPD retains operational control of the municipal courses but runs golf like a business with responsible revenue and cost management within the Department, as was always the intention. The model for this is the City of San Diego. Their municipal Golf Operations Division, which includes the much acclaimed Torrey Pines Golf Courses, has an organizational structure and 5 year business plan that provide a compelling model to consider for San Francisco’s municipal golfcourses. There are a number of similarities between San Diego and San Francisco: the same number of golf holes, the responsibilities of championship events, similar operational requirements, public concerns, and financing issues. It's main virtue is its structure - it has one — with a Golf Operations Manager in charge. This model V was referenced in both the ERA report in 2002 and described in detail in the NGF report in 2007 (Appendix, pages 56-64-). lt is not clear why RPD did not choose to include this model in their list of possibilities for San Francisco. San Francisco should be at least as capable as San Diego is at running a first-rate municipal golf course!"

"It is time to call for an independent, third party, cash operations audit, the scope of which is to a high standard of "a comprehensive engagement beyond the level of sampling."

I have corresponded with my district supervisor David Chiu (who has yet to weigh in on the issue) and asked him to focus on the specific questions raised by Nancy Wuerfel's report:

"The advocates of destroying or giving away the course place enormous weight on the representation that the course is losing money. The recent exhaustive letter/report from Nancy Wuerfel to The City indicates that this representation is completely false. Obviously it would be terrible mistake for the city to make a decision to destroy or give away the course if it is in fact operationally revenue positive as Nancy represents. I think everyone can agree that this question of fact should be absolutely settled by an impartial and unimpeachable third party before a decision is rendered."

We'll see if David does his required reading.

Brent Plater and the rest of his "Center for Biological Diversity" cohorts disingenuously continue to parrot provably false and dated data on the revenue positive contribution of Sharp Park golf. Honest to god, they sound like Birthers still claiming that Obama was born in Kenya despite all evidence to the contrary. The clear evidence from Nancy's report is that the course does make money for The City. If the course was dragged out of the impenetrable SF accounting fog into a regional responsibility or even just a shared responsibility with Pacifica, everyone would understand that Sharp Park is a moneymaker. If and when that happens, Ross Mirkarimi is going to look like a complete idiot for falling under the influence of the Plater reality distortion field and advocating that this treasure of a course pass from city hands.

That said, Nancy shows the level of incompetence is so deep, so widespread, required so much dereliction of duty and willful ignorance by so many public and elected officials of their public commitments and obligations under the law in order to maintain the fiction that the golf courses lose money, that you just have to wonder about motivation.

If not incompetence, a real interesting and unresolved question remains - Who benefits from years of cooking the books to pretend that our money making golf courses are losing money?