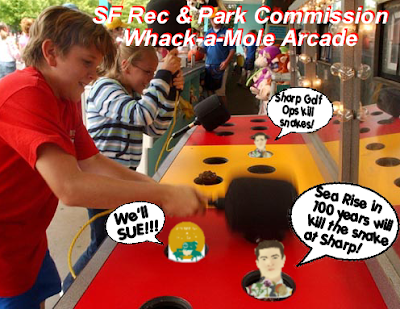 Reviewing the last few posts, I note that my "live blog" effort at the San Francisco Recreation and Parks Commission meeting was - what's the word? - lame. Let's supplement with some MSM coverage.

"The future of San Francisco's Sharp Park Golf Course, which is located in Pacifica, drew dozens of people to City Hall Thursday for a hearing before the Recreation and Park Commission. The 18-hole coastside course is home to the federally protected San Francisco garter snake, an endangered species. Some environmental activists want the city to close the public links and convert the property to a more natural state. Golfers and many nearby residents want to keep the popular course open."

Golfers are siding with those environmentalists that prioritize creating habitat for the snake over those environmentalists favoring restoring the original salt water lagoon that existed before the the golf course. This issue was highlighted by the comments of Karen Swaim, an environmentalist and biologist who has done extensive work with the San Francisco garter snake. At the end of the night (presumably after the MSM deadline) she ripped the opposing environmentalists a new one, specifically those who were conflating the contradictory goals of coastal wetland restoration (i.e. CBD and Plater) with enhancing and expanding garter snake habitat on this site. More on this schism in a future post.

Watching the ABC clip you might get the impression that the primary reason that the Plater/CBD environmentalist camp were arguing for the destruction of the golf course, was to protect the snake and frog against global warming and the rise in sea levels. Brent Plater is featured in the video saying "The area that currently is designated for endangered species habitat at Sharp Park, is the area that is going to be overrun by climate change and sea-level rise." In fact, this is a new argument for the Plater/CBD environmentalist faction, a new "mole" that only recently popped out its hidey hole. Hence the title of this post. Trying to have a reasoned discussion with these guys is like playing a game of whack-a-mole.

Example: The Rec and Parks report definitively whacked the "golf operations are killing endangered species" mole. So now we see a new "global warming/rising seas will kill the endangered species at Sharp Park" mole pop out of the hole. It does not matter that it is completely nonsensical. Once people realize how truly absurd this meme is - "We have to destroy the course NOW to protect the snake from a catastrophe that, if it happens, will destroy all of Pacifica, Outer Sunset, Golden Gate Park, Alameda, the Marina, SFO, etc. etc. in 75 years or so." - then another mole will pop up. Apparently the point of their arguments do not require them to make sense, the point is not to make reasoned arguments at all, the point is simply to distract attention from the previously whacked mole.

It is instructive to go back to the original reason this mess was stirred up - the September, 2008 letter from the Center for Biological Diversity threatening to sue The City.

"SFRPD … must cease all other management activities at Sharp Park that harm California red-legged frogs and San Francisco garter snakes (e.g., mowing, yard maintenance, sediment deposition, nutrient runoff); and must develop a plan that will prevent future and harmful activities in Sharp Park to frogs and garter snakes."

Note what is not in the letter - any mention of global warming/climate change/rising sea levels.

Brent Plater is the self-appointed local face of the effort to destroy the golf course. After the letter was sent, he began chiming in at every opportunity, singing out of the same hymnbook as CBD on the bogeyman of golf operations. This recent example is representative -

“...government officials discovered that the golf course's operations and maintenance are harming two of the Bay Area's most wondrous and imperiled animals. The endangered San Francisco garter snake.. and the threatened California red-legged frog... are being killed by mowing and pumping operations...”

In an earlier incarnation, Plater's stump speech did not mention climate change or sea rise. In the SJ Mercury version, it was an afterthought tossed in at the end. Then something happened on November 6, 2009. The San Francisco Department of Recreation and Parks released the long awaited report developed specifically to address the issues raised by the CBD in their threat to sue. The report recommended keeping and modifying the 18 hole course and was embraced by Operations Manager Phil Ginsberg, environmentalists who prioritize creating immediate beneficial habitat for the San Francisco garter snake, as well as local, state, and federal politicians from across the bay area. The report clearly addresses all issues of "golf operations" affecting the snake and frog population. So how do the Plater/CBD faction react?

They turn the page of the hymnbook and start singing a new song.

“Yet the report... refused to take a look at the impacts of climate change and sea level rise, and at the same time puts the frog and the snake habitat directly in conflict with areas we know will be inundated by sea level rise and storm overwash. If we don't create defensible space upland of Laguna Salada for the snake and frog, which right now is all golf course, we will lose that population forever. If this proposal that Phil Ginsburg is pushing ultimately gets adopted, we can be certain that within 50 to 100 years, as sea levels rise, ocean conditions change, the area that they're setting aside for the frogs and the snakes won't exist any more.”

“...the minimal habitat enhancement proposed by the Park Department in the 18-hole alternative is inadequate to allow the recovery of the garter snake and frog at the site, and is set up to fail with climate change and sea level rise... If we don't create defensible space upland of Laguna Salada for the snake and frog, which right now is all golf course, we will lose that population forever."

Representative Jackie Speier is having none of it, and said so when confronted by Brent Plater's nonsense in that same KQED forum:

"You know, the issue of climate change is a serious one, and one we all have to concerned about. But in 50 to 100 years, San Francisco International Airport may be under water. So I think what we have to do now is be practical about protecting the garter snake and the red-legged frog and keeping the golf course open."

Spot on. Couldn't have said it better myself.

Time for a new mole to pop up.