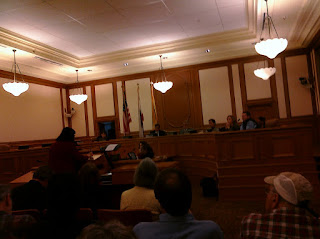 Barb A. Is the first up after Supervisor Mirkarimi's representative. I think it is telling the Mirkarimi did not personally show his face at the hearing.

Barb makes some great points that Sharp usage is growing and the course is making money for The City, contrary to the assertions of those who would destroy the course. Her comments echo and expand on the finding of Nancy Wuerfel's report of The City's Golf Fund accounting. Nancy herself reinforced that idea later in her own public comment.

The economic and accounting ignorance of the Sharp Park Golf opponents is appalling. They cannot seem to understand the concept that if you must invoke "overhead charges" that are siphoned to other SFRPD or City entities in order to claim that course is losing money, it means the course is actually subsidizing City operations, and not the opposite.

If you kill the course revenues paying for that non-golf "overhead", the overhead will still have to be paid from elsewhere, in either cuts or increased taxes. It is not rocket science, but it may be willful ignorance on the part of Plater and the CBD. 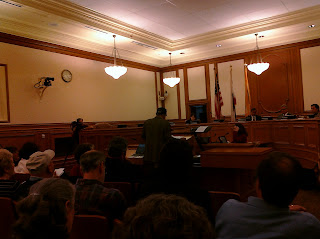 Author Bo links was at the podium shortly after. I cornered him later to sign my copy of "Follow The Wind". Great book.