Hmmm. I may have to invite him to join our foursome at Lincoln Park on Sunday:

Padraig Harrington was the last man to leave an Open party which finished at four o’clock on Monday morning.
By Lewine Mair
22 Jul 2008 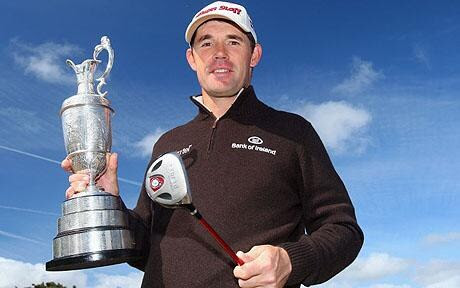 The first refreshment to have been served from the Claret Jug was John Smith’s bitter but, not unlike Harrington’s golf, the best was saved until last, with the beer giving way to vintage claret.

Yet the double Open champion was up for breakfast at eight and, as he downed his porridge, he was busy poring over the Ryder Cup points table. Where, previously, he had not featured among those already in the side, he was now safely aboard. “The Ryder Cup becomes entertaining once you’re in it,” he said, mischievously...

For several years, Harrington has had an ongoing long-driving competition with a two-handicap friend in San Francisco in which his opponent is allowed to hit with two hands and he with one.

It was when he was in San Francisco last year and was in the company of that same friend and others, that the party hailed a taxi whose driver happened to be so much of golf nut that he was driving his cab in a golf glove and talking incessantly of the inner game.

Harrington had the Claret Jug with him at the time and it was sitting in a box in the back. The taxi driver looked long and hard at the metal case but did not like to ask about its contents any more than the Irishman liked to tell him. Only when Harrington got out at his hotel did the others put him in the picture.

Ever since, he has been kicking himself that he did not open the box. “It’s the saddest thing,” Harrington said. “Just think what it would have meant to the man. He would have been able to tell the story for the rest of his life.”

By Monday, Harrington was making arrangements for a return trip to San Francisco, with his main mission to hunt down that taxi driver.