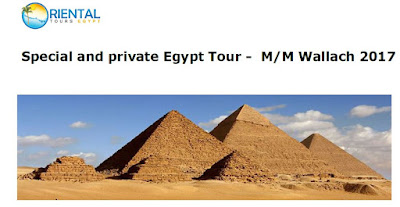 A four airport day is always a bad day. But it's not so bad when accompanied by the excitement at the beginning of a new travel adventure. At least we've planned this so that we are leaving before Friday 13th and arriving in Cairo after Friday the 13th. We will only be on airplanes and in airports during Friday the 13th. But I'm not superstitious. So no problem.

We're off on a tour of Egypt and Jordan. As per usual, my Travel Advisor has planned an extraordinary cultural and sightseeing packed (possibly over-packed) 3+ weeks. It'll be great. But exhausting. But great.

Also as per usual, I will attempt to maintain a daily photo journal of our travels on this blog - time and internet availability permitting.  The Itinerary is pre-loaded and should appear on a day-by-day basis. But the the map is never the territory and it's likely we'll diverge from the plan. Also as per usual, the journal will be incomplete and sustain significant gaps while en-route. I'll finish it eventually. If interested in our travels, watch this space.

This trip has been on Sigrid's list for a while. It'll be our fourth trip to Africa (Ethiopa in 2012, West Africa and Mali in 2007, Southern Africa in 1995) and first to the Middle East.

We've received more than the usual expressions of concern from friends and family about this trip. Truth be told, Early in the year I told Sigrid to forget about it and plan a trip in some other part of the world. There are a lot of places we have yet to visit. Then - at a Thanksgiving table with friends - we sat across from a couple who had recently returned from a trip to Egypt (you know who you are). They were effusive about the people, the trip, and the experience. As I sat there listening, I knew it was game over.

The fear is, of course, terrorism. But when you look at what has actually transpired over the last couple years, it's not like you can eliminate the risk by being in an airport in Fort Lauderdale or Brussels, a nightclub in Orlando or Paris, on the waterfront in Nice, at an office party in San Bernardino, or at a Christmas market in Germany. The risk is small and just staying home is not something we are going to do.

Finally, for my friends and family in Chicago, I'd just like to point out that the murder rate per capita in Cairo and Amman is about 1/3 of what it is in Chicago. So, while we're gone - you guys be careful out there.