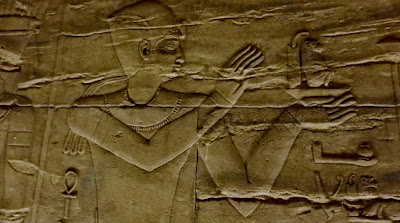 
"Here we visit the Greco Roman Temple at Kom Ombo. The temple building is totally symmetrical with two entrance's two halls and two sanctuaries dedicated to the Falcon God Haroeris (Horus the Elder) and the Crocodile God Sobek. We set off for the relaxing journey to the temple of Gebel el Silsila, another of our less frequented destinations. You will be amazed as we tie up alongside the Speos of Horemheb. If possible dinner will be served in the grounds of the illuminated temple or on the upper deck whilst soaking up the tranquil atmosphere with music to match the mood."

Journal:
Actually we did none of that. We flip-flopped some sites between the itinerary for day 13 and today. We've already been to the Greco Roman Temple at Kom Ombo and the Speos of Horemheb is still in our future. As we are now the only passengers left on the boat, presumably the itinerary was juggled to coordinate travel logistics and accommodate our fellow passengers. Either that or Ismail modified the itinerary because it just made more sense this way. Doesn't matter. We totally trust the guy. 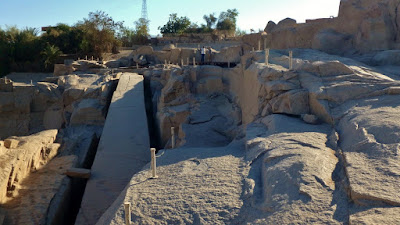 Our first stop was the Unfinished Obelisk at the granite quarry in Aswan. An open air museum, an active archaeological site and a historical window into just exactly how they built and transported those things (no aliens needed). This is where the great Egyptian obelisks were quarried. 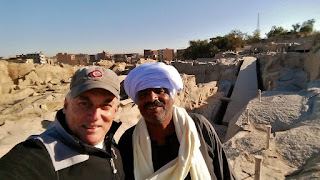 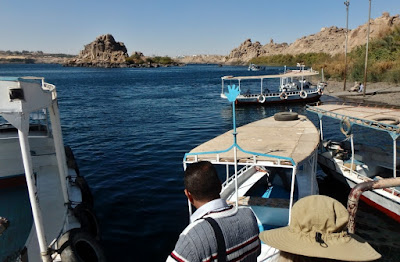 Next stop, a water taxi to the island of Philae and another relocated drowned temple complex...


... a temple complex originally sited on nearby Philae Island:


"The most conspicuous feature of both islands was their architectural wealth. Monuments of various eras, extending from the Pharaohs to the Caesars, occupy nearly their whole area. The principal structures, however, lay at the south end of the smaller island. The most ancient was a temple for Isis, built in the reign of Nectanebo I during 380-362 BC, which was approached from the river through a double colonnade. Nekhtnebef was his ancient Egyptian royal titulary and he became the founding pharaoh of the Thirtieth and last native dynasty when he deposed and killed Nepherites II. For the most part, the other ruins date from the Ptolemaic Kingdom, more especially with the reigns of Ptolemy II Philadelphus, Ptolemy V Epiphanes, and Ptolemy VI Philometor (282-145 BC), with many traces of Roman work in Philae dedicated to Ammon-Osiris."

The island was more underwater than not in the era of the Aswan Low Dam. In the sixties, like Abu Simbel, the ruins were relocated to higher ground on nearby Agilkia Island, and that is where we toured this day. 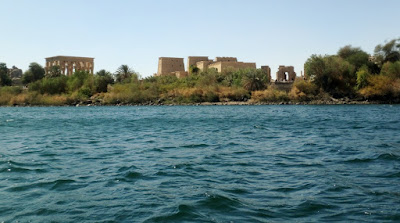 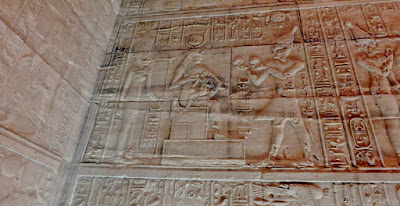 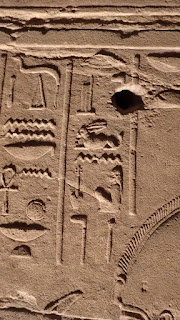 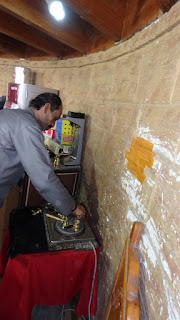 For millennia, the annual flooding of Nile Valley literally determined the ebb and flow of human civilization in Egypt. The floods depositing silt created the rich agricultural base that made the wealth and power of the great kingdoms possible. Transportation and communication on the Nile tied the kingdoms together. Barges lifted by the predictable floods moved tons of rock from quarries to the site of pyramids, temples and monuments that attract tourists today. The Nile floods made Egypt. But the Nile floods are no more. 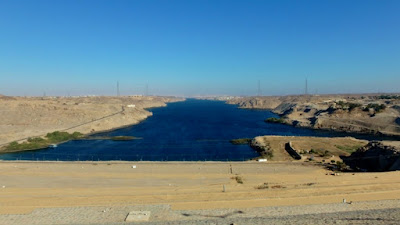 In 1970 the annual flooding stopped with the completion of the Aswan High Dam, unarguably the most consequential construction project in the history of Egypt and perhaps all of Africa. It curtailed the destructive effects of the floods, generated a significant percentage of the country's electricity, permitted more predictable and reliable navigation on the Nile, spawned a fishing industry in the new inland freshwater sea, and made agricultural irrigation consistently productive. It's construction also had negative consequences, including the forced relocation of hundreds of thousands of people and drowning historic archaeological treasures. Other consequences are still being tallied and will continue to have ripple effects on the Mediterranean,  the river delta, wildlife, farming and culture for decades into the future. 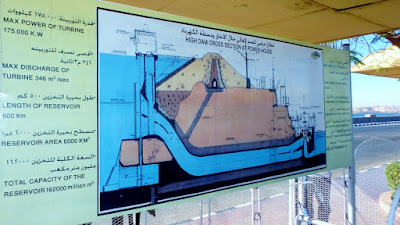 Few would argue anything other than the benefits outweighed the costs, but the scales will be measured and balanced for decades to come. 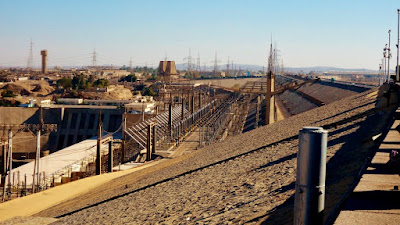 Standing on the dam, contemplating it's meaning in the context of all we had seen, was a fitting finish the last upstream stop of our Nile cruise. It's all downstream from here. 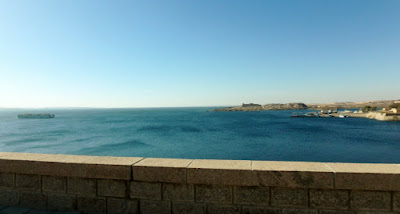 Gamel Nasser played off relations with the US and the Soviet Union against each other during the cold war of the sixties. One benefit to Egypt was Soviet financial help building the Aswan High Dam. This massive monument to Egypt USSR friendship was erected to commemorate the completion of the dam.
Back to our cabin on the Amoura ...

... and relaxing on the aft deck veranda with refreshments as we resume our cruise back North.

Sigrid says she is planning to move permanently to the Winter Palace in Luxor. 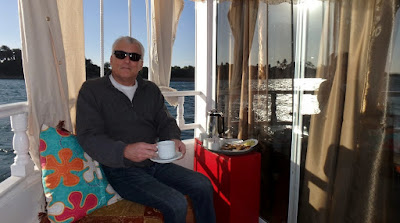 Editors Note: I intend to pre-load and schedule automated blog posts with the daily itinerary for our Egypt and Jordan adventure. For those interested, this may be an easy way to follow along. Internet access is always a crapshoot. My hope is that by pre-loading the itinerary it will be easier to add some pics and journal commentary as time and the internet permits.