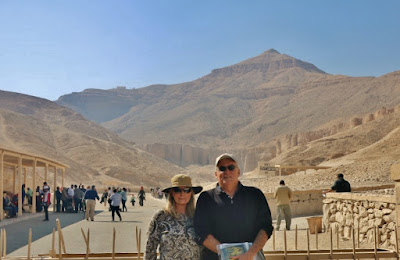 
"After breakfast, We start our visits of Luxor by exploring the Valley of the Kings, the necropolis of New Kingdom of ancient Egypt. The Pharaohs of the 18th dynasty till the 20th dynasty wished to protect their tombs against thieves; this was why they dig their tombs deep in the Theban Mountain, called the Theban peak. This includes the wonderful tomb of Tut Ankh Amun, discovered by Howard Carter in 1922.

Our next visit will be to the Temple of Hatshepsut; this magnificent mortuary temple was named the Splendid of Splendids. It was constructed by the first Queen to rule over Egypt in the 15th century BC. Afterwards, many sections of the temple were destroyed by Ramses II and many of his successors. During the Coptic period of Egypt, the temple was transformed into a monastery, titled El Deir El Bahary.

Back to east bank to visit the Karnak Temple, the largest and the most important Pharaonic temple in the whole world. Established in the New Kingdom, the Temple or the complex of temples of Karnak was constructed over around 1300 years. Every king and Pharaoh of Egypt wanted to have his addition in the Karnak. This was why it turned out at the end to become the largest Pharaonic complex in Egypt Overnight in Luxor." 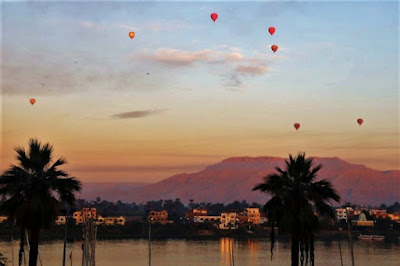 We wake to a magical site from our balcony overlooking the Nile. Hot air balloons floating over the West Bank at dawn, a preview of coming attractions in the days ahead. But today we will not be ballooning over the Valley of the Kings, today we drive.


We meet Ismael in the lobby after another breakfast buffet at the hotel, with the usual gut busting temptations, then a drive through Luxor over the bridge to the west bank and the Valley of the Kings. Here among active archaeological excavations, are 63 tombs of the New and Theban Kingdoms, each of which are numbered in the sequence of when they were discovered. We start at the museum entrance for an orientation lecture by Ismael near a plexiglass model of the valley and the tombs.

A subset of the tombs are open to the public on a rotating basis. We purchased tickets that permit access to four tombs. Sigrid and I visited most of our selection together (including the mandatory King Tut) but split up for one. I wanted to see the KV34 - The Tomb of Tutmoses III which has the steepest climb and most convoluted entrance. Sigrid picked another. 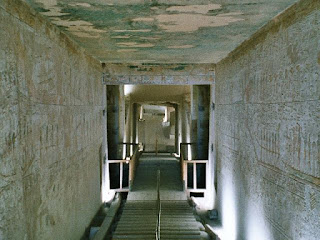 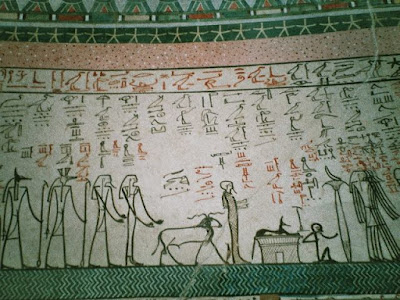 Photography is not permitted in the Valley, so all I can show here is some pics from wikipedia and tourist CD purchased at the site. As with so much in Egypt, one simply comes away with a sense of wonder and amazement at the unfathomable scope of history, archaeology, art and geography to be found at the site.

Next stop, the monumental Temple of Hatshepsut. We can take pictures here. 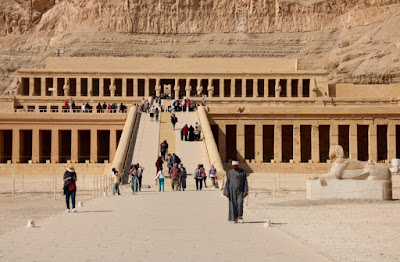 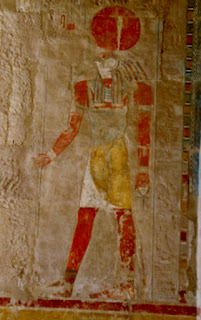 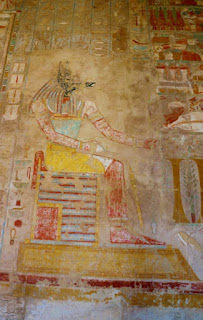 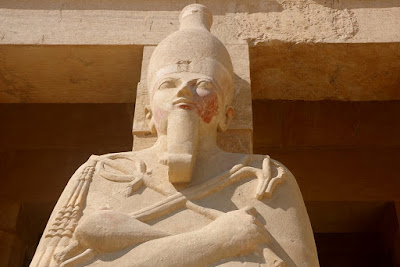 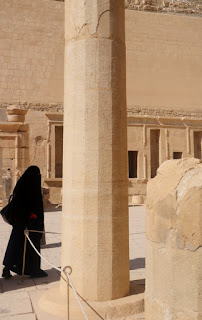 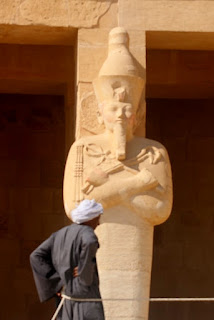 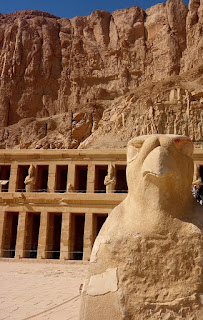 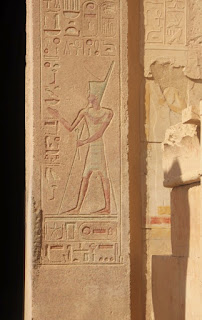 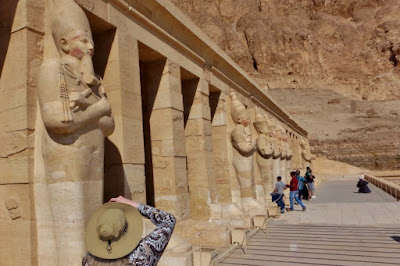 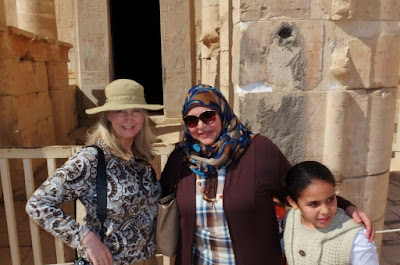 We decide to forgo Karnak until a later day so we can enjoy a unique experience on the Nile. A Felucca (water taxi) takes us on a short cruise to Banana Island, where we enjoy grilled fish with baba ganoosh and soup at an open air restaurant favored by locals. 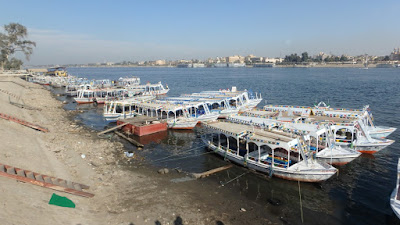 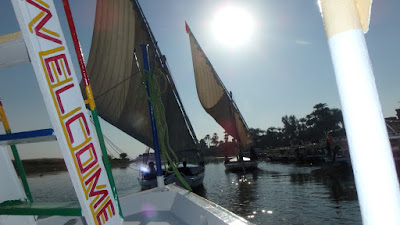 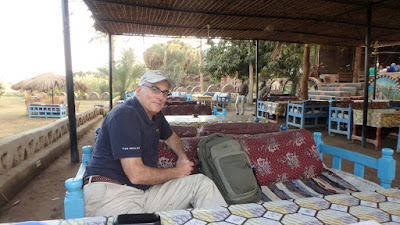 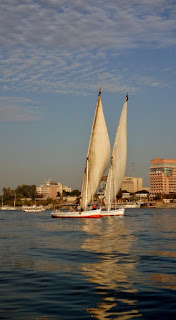 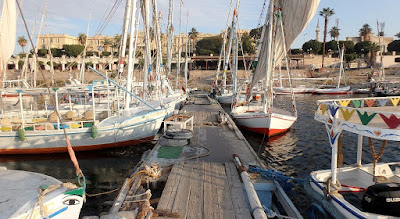 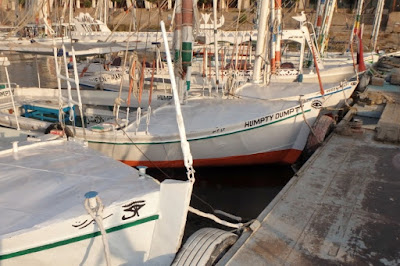 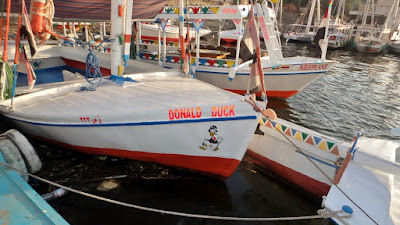 After lunch another sightseeing stop at the Colussus of Memnon, and an artist commune where we can see now alabaster figures and bowls are carved (and - of course - sold). 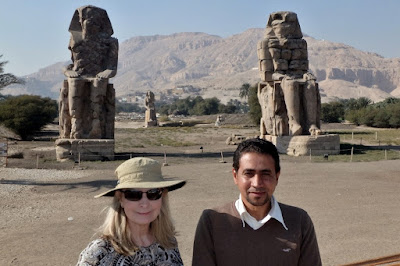 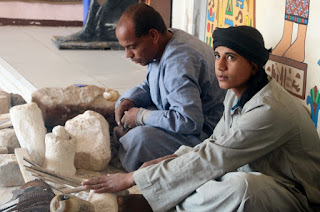 We bought an alabaster vase after some extensive discussion. I wanted to get something bigger and have them ship it. Sigrid wanted something of a size we could transport ourselves. Unsurprisingly, Sigrid carried the day and consequently we carried the vase for the rest of the trip. Turns out, it was a bad idea. But we didn't know that at the end of this particular day. 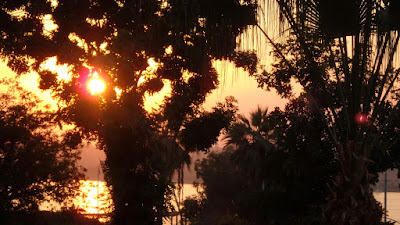 At the end of this particular day, we enjoyed a drink and a sunset over the Nile from our veranda at the Winter Palace Hotel.